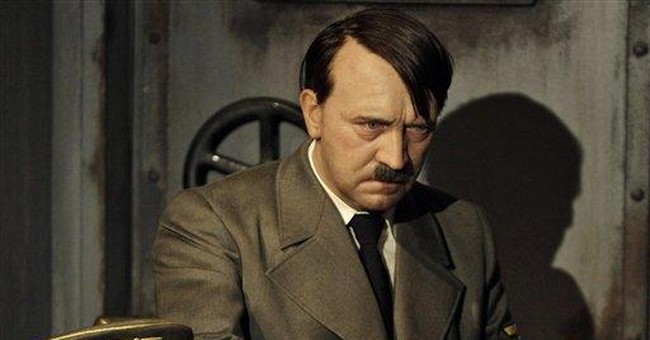 As members of the Allied Expeditionary Force entered the landing crafts that would transport them to their rendezvous with history in the early morning hours of June 6, 1944, they received individual copies of the Order of the Day drafted by their Supreme Commander, Dwight D. Eisenhower. He had given the go ahead for the massive invasion, code named Overlord, in spite of weather that was less than inviting. He wanted the men to understand what they were fighting for – and against.

“You are about to embark upon the Great Crusade, toward which we have striven these many months. The eyes of the world are upon you. The hopes and prayers of liberty-loving people everywhere march with you. In company with our brave Allies and brothers-in-arms on other fronts, you will bring about the destruction of the German war machine, the elimination of Nazi tyranny over the oppressed peoples of Europe, and security for ourselves in a free world.”

In those days leaders weren’t as concerned about the politically correct parsing of phrases and words as some seem to be today. It was clear to them that they were not fighting mere “flesh and blood” but abhorrent ideological wickedness (“Nazi tyranny”). And they passed that clarity onto those who were engaged in the perilous fight.

So, why is it so hard for some today to call things as they are?

We are not fighting a war on terror. We are fighting against a pernicious way of thinking. Terrorism is a methodology – a way to fight a battle. The technique itself is not the enemy. Our foes are people and regimes who, in the name of foul opinion, perpetrate destruction. Just like back in the 1940s.

Can you imagine what it would have sounded like if Ike, FDR, or Churchill had been bound by the sensitivities of our day? We would have been “battling the blitzkriegers,” or maybe “bringing to justice those who dared to attack too early on a Sunday morning,” - hardly clarion calls.

Wars make more sense, and they tend to be conducted with greater vigilance and effectiveness, when we understand things in terms of good vs. evil. But these days it’s hard to even bring up the idea that militant Islam is to blame, much less to frame the current conflict as a war against it. History, however, leaves clues that remind us that there is really not much new under the sun.

David G. Dalin and John F. Rothman have written a new book, one that should be read by all Americans seeking to understand current geopolitical reality, called: Icon of Evil: Hitler’s Mufti and the Rise of Radical Islam. They make a compelling and well-documented case that we are actually fighting the quasi-spiritual offspring of Nazism and Fascism.

Haj Amin al-Husseini (1895-1974) is by no means a household name today, but his story is a key historical plot-point helping to create the mess we now find ourselves in. From his appearance on the stage of turbulent Middle Eastern politics in 1921, until his death fifty-three years later, he was a consistent and vociferous voice preaching a blend of anti-Semitic, anti-Western, and pan-Islamic rhetoric to anyone who would lend an ear. And there were plenty of listeners. There still are. He was the grand mufti (maximum leader) of all muslims in Palestine – the big kahuna.

Mr. al-Husseini’s political journey was driven by a radical interpretation and application of Islam. He was an effective and charismatic leader of a vast movement - forerunner of the various manifestations of Islamic fanaticism extant. This virulent form of his religion took hold during the period between the two world wars and grew to become the plague it now is on all houses of freedom.

And it turns out that al-Husseini was a big fan of a man by the name of Adolf Hitler. The number one Nazi liked him, too.

In November of 1941, a little more than a week before the attack on Pearl Harbor, there was a meeting in Berlin, one that is often relegated to a footnote in the history of that great global conflict. Haj Amin al-Husseini made his way from the mansion he’d been provided by the Nazis toward the Reich Chancellery, where he was to meet Hitler in the dictator’s private office. Dalin and Rothman describe this ominous meeting in great detail.

The mufti sought to ingratiate himself with Hitler and the strategy was reciprocal. They pledged allegiance to each other. And why not? They had common goals and enemies. The German leader bestowed honorary Aryan citizenship on his guest (Hitler interpreted al-Husseini’s blond hair and blue eyes as evidence that the Islamic leader must have possessed some “pure” blood) and it was clear that his visitor was keenly interested in being set up as the Nazi leader in Palestine and its surrounding region.

Al-Husseini eventually recruited 100,000 European Muslims to partner with the Waffen-SS, and the authors of Icon of Evil hint at the idea that the cleric-politician was influential in the decision to implement the notorious Final Solution. He was good buddies with Heinrich Himmler and Adolf Eichman.

Nazis and radical Islamists – together. Nothing good could come of that, and in fact, a lot of today’s bad stuff was incubated in that Berlin laboratory.

One of the most captivating portions of Icon of Evil is devoted to the question: What if Hitler had been victorious and the war had turned out differently? Drawing on similar previous musings by writers such as William L. Shirer, John Keegan, and David Fromkin, the duo shares a chilling narrative about how radically different life would be today had Hitler won. This is important not just because of the horrifying idea of a Hitler-dominant Europe – but also due to what the Middle East would look like in such a case. Al Husseini wanted to extend the Holocaust beyond the borders of European living space to the Middle East. His goal was something near and dear to the heart of the depraved men running the Third Reich – a Palestine that would be virtually Judenrein (a reprehensible Nazi term literally meaning: “clean of Jews”).

Then there’s the story of how this wicked preacher was able to avoid the Nuremberg trial dragnet, in spite of clearly being guilty of egregious war-crimes. He would not be brought to justice, but rather would live out his days back in the Middle East. His post-war work included becoming something of a mentor to men who would become famous in his cause. What do Gamel Abdel Nassar, Anwar Al Sadat, Yassir Arafat, and Saddam Hussein have in common? They were all connected with, and deeply influenced by, Haj Amin al-Husseini. Hamas and Hezbollah are very much part of his legacy, as well. He worked closely with the theoretician of radical Islam, Sayyid Qutb, as well as Saddam’s infamous uncle, General Khairallah Talfah. The guy was connected. And the usual suspects he ran with paved the way for everything from the attacks on September 11, 2001, to the maniacal rantings of Mahmoud Ahmadinejad.

In fact, some of Haj Amin al-Husseini’s spirit is in the intellectual and emotional DNA of every current radical Islamist.

Now, here’s what really bugs me – why could we fight a war nearly seventy years ago, all the while referring to our enemies as Nazi thugs, and yet today be so concerned about sensibilities that we’re reduced to, at best, rhetorical beating-around-the-bush?

The war we are in is not against a weapon, no matter how dreadful that weapon is. We are fighting a virulent ideology. To be brutally honest about it - to call our enemies today terrorists, or even Islamo-Fascists, is not strong enough.

They are Islamo-Nazis and they’re really bad people - like the German-Nazis were.