Website, Schmebsite, Keep Your Eyes on the Big Ball 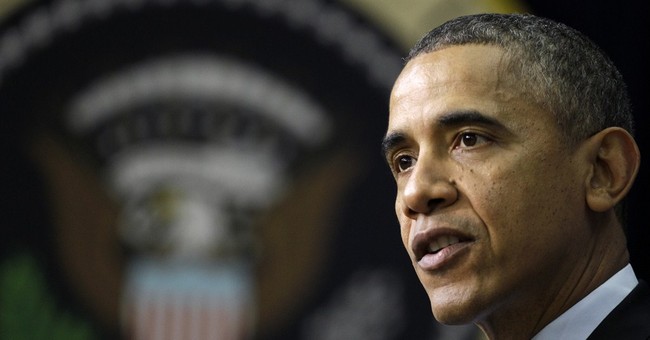 I'm not sure which the Obama administration is better at, deceiving the American people into accepting its initial policy changes or conning them into accepting, after the fact, the lowering of expectations for these failed policies.

Just look at this president's miserable track record on both counts. His administration predicted his exorbitant stimulus package would create boatloads of "shovel-ready" jobs (not to mention reduce unemployment), but it didn't even come close. In response, Obama insisted the economic circumstances he inherited were far worse than he had imagined. He also cynically joked away his promise to generate shovel-ready jobs -- as if to say the American people were fools and dolts for taking him seriously about such a claim.

Obama repeatedly promised that his government-induced green projects, such as Solyndra, would produce thousands of jobs. When the project and similar ones went belly up, he didn't so much as flirt with offering an apology or a plausible explanation but just implied that such colossal failures were bumps in the road toward transitioning into a green economy, and he blithely announced more federal millions dedicated to similar boondoggles.

The examples are endless, but let's move on to the Obamacare website debacle, with which the administration is setting records for both incompetence and chutzpah.

Assuming you haven't been living with Jed Clampett's descendants in the sticks where there is no access to television or the Internet, you're well aware of the stunningly egregious Obamacare website rollout. It would have been infinitely inexcusable had the administration spent tens of thousands of dollars on it and had a shorter window to make it work. But it had several years to plan and implement it and has wasted -- and continues to waste -- hundreds of millions of dollars on it.

But why worry about mere hundreds of millions dedicated to the website? Columnist Morgan Brittany reports that one section of the abominable law authorizes the allocation of some $8 billion just to promote Obamacare.

How did the administration handle the website failure? Well, Obama said, "It's on us." But then he proceeded to blame Republican obstruction and casually changed the deadline to Nov. 30.

As the end of November approached, the administration's bar-lowering aficionados moved into high gear and said that things were much better but that they were still just expecting to have it work for 80 percent of users, a figure that any Republican president would have been savaged for suggesting.

Indeed, instead of apologizing, the administration boasts that the website is "less prone to errors" and is "on track to work for a vast majority of users." (Even former White House press secretary Robert Gibbs called BS on that one.) Health and Human Services Secretary Kathleen Sebelius claims "dramatic" improvement but recommends potential "customers" (read: subjects) use the site during "off-peak hours." Comforting, huh? Kind of like "the dog ate my website." But hey, if you can't fulfill your disingenuous promises, why not change the rules midgame? It's not about producing results but about duping and pacifying people.

Apart from the rationalizations and bar-lowering shenanigans, the administration is flat out defrauding us again. As Breitbart and others are reporting, the site can handle only 50,000 users at a time; it loads slowly; small businesses won't be enrolled until after the 2014 midterm elections; technical problems will impede the government's ability to verify users' identities and the transmission of accurate enrollment data to insurance providers; and some crucial parts of the site haven't even been built yet.

In addition, though the administration says the system is working 95.1 percent of the time (excluding scheduled maintenance), the industry standard for websites is 99.9 percent, and "anything below that," reports The Washington Examiner, "is considered a failure and 95.1 percent is a disaster." The Examiner also calls into question the administration's claim that it's working for 80 percent of users. "Centers for Medicare and Medicaid spokeswoman Julie Bataille was a bit vague about whether that goal had been met."

But let's keep our eyes on the big ball, shall we? Regardless of the administration's obfuscation, mendacity, scapegoating, weasel-wording, ex post facto reductions of expectations, and smoke and mirrors manipulation, the website will eventually work in a technical sense.

Yet when all that fairy dust has settled, the substantive problems with Obamacare will remain, as people will continue to suffer involuntary divorces from their plans and doctors, be coerced into paying more for coverage, lose control over their own health care decisions, and receive lesser-quality and less timely care. Doctors will reportedly face a 24 percent pay cut in both Medicare and Medicaid reimbursements, which will force even more of them out of the profession than Obamacare is already doing, and Obamacare will continue to bend the cost curve up, not down, and destroy American jobs.

Improvements to the disgraceful website, as inferior as they are, are but distractions from the real problem, which is Obamacare proper -- a legislative menace that must be repealed. Not massaged, not corrected, not amended, not fixed but outright repealed.