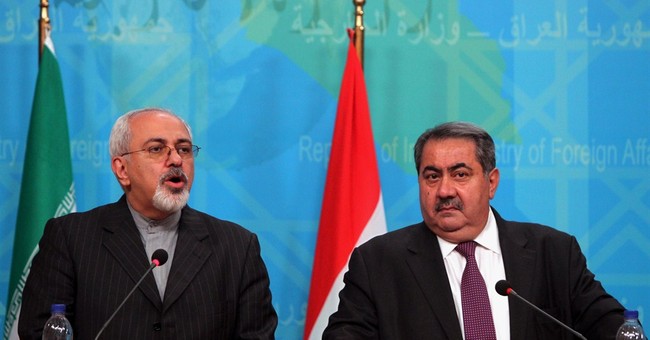 Does anyone with credibility like this deal Obama's team made with Iran? I'm not seeing much encouragement as I scan the news covering the subject.

Ask yourself this: What was so urgent about securing a deal that will allow Iran to pursue nuclear development in exchange for our releasing the sanctions? Did you do a double take on that formulation? You should have.

Nor did the administration even lift a finger in these negotiations to secure the release of American pastor Saeed Abedini, whom Iran has imprisoned based on entirely trumped-up charges. The administration said, "The P5+1 talks focused exclusively on nuclear issues." But as David French writes in National Review Online, "no, they did not. They also included 'humanitarian' discussions. Do we only care about the humanitarian needs of Iranians?"

From Obama's perspective, one thing is definitely more urgent than any foreign policy issue on the table: creating a serious enough diversion to slow down his free-falling approval ratings from the Obamacare rollout and insurance policy cancellations, which have exposed his deliberate deceit of the American people.

For the first time, a CNN poll shows that more than 50 percent of Americans do not believe Obama is "honest and trustworthy," and only some 40 percent believe he is an effective manager of the federal government. It gets worse. Fifty-six percent say the president is not admirable, does not reflect their opinions on important issues and does not inspire confidence.

So what are the "deal points" of this diversionary deal other than that it greatly reduces the long-standing and painful sanctions against Iran imposed by U.N. resolution and American law? Well, it now has a "right" to enrich uranium. Columnist and author Jed Babbin, a former deputy undersecretary of defense under George H.W. Bush who has reviewed the agreement, says that over the next six months, while we are supposed to be further negotiating, "Iran gives up very little." It is permitted to retain enough of its enriched uranium to produce rudimentary nuclear weapons.

But not to worry, we get to conduct inspections to ensure the process is not used for nefarious purposes. Except that the media are reporting that the deal requires fewer inspections than the International Atomic Energy Agency believes are necessary to ensure Iran isn't developing nuclear weapons.

Former United Nations Ambassador John Bolton is equally critical of the deal, which he says legitimizes Iran on the global scene, does not strictly prohibit it from enriching uranium and allows Iran to buy time to further work on its nuclear program in secret. It constitutes, says Bolton, "abject surrender by the United States."

Even liberal Harvard law professor Alan Dershowitz says the deal increases the odds that Iran will develop a nuclear bomb, which would likely create the need for a future military strike by Israel or the United States.

How can we trust this administration to make a deal with the single greatest state sponsor of global terrorism when it considers tea party patriots enemies and the Islamic Iranian theocracy a new peace partner?

At the forefront of the deal is Secretary of State John Kerry, who told U.S. senators, "You have to ignore what (Israel is) telling you. Stop listening to the Israelis on this." This is the same John Kerry who has been slandering our brave and noble service members as murderous savages for decades.

Sen. Mark Kirk, R-Ill., told reporters after the briefing: "It was fairly anti-Israel. I was supposed to disbelieve everything the Israelis had just told me, and I think the Israelis probably have a pretty good intelligence service."

Obama frequently protests that he is a strong supporter of Israel, but he has also declared himself a fierce supporter of the free market. Actions are louder than words, and Obama has demonstrated himself to be no reliable friend of Israel.

Israeli Prime Minister Benjamin Netanyahu contradicts President Obama's self-serving assertion that the deal will "help prevent Iran from building a nuclear weapon." Netanyahu said that Israel would not be bound by the agreement and that he had a "duty to speak out": "We cannot and will not allow a regime that calls for the destruction of Israel to obtain the means to achieve this goal." Also, The Jerusalem Post reported that Israeli Foreign Minister Avigdor Lieberman indicated it is time for Israel to look beyond the United States as its principal ally.

Making matters worse, Obama and his team, people who savaged President George W. Bush for his supposed "unilateralism," allegedly kept Saudi Arabia in the dark over these negotiations. The Telegraph is reporting that a senior adviser to the Saudi royal family has accused its Western allies of deceiving it in striking this deal with Iran and warned that Riyadh will follow an independent foreign policy.

If this is an attempted diversion from Obamacare, it's not going to work. If anything, it's the other way around. Obama's handling of Obamacare will rightfully cause greater scrutiny of every other Obama policy action, including this highly suspect deal with Iran.

Next stop on the diversionary train: comprehensive immigration reform.