Obamacare: A Hill to Die On 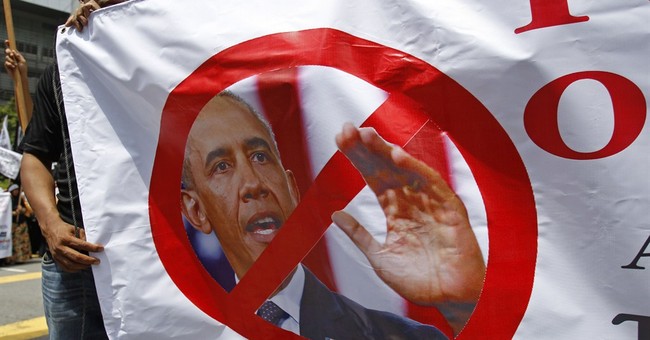 Trending
Notwithstanding the naysayers from the left and the right, the bullying White House is running scared, as evidenced by its increasing nastiness, name-calling and petty manipulation of the government shutdown.

President Obama must be shocked that his usual demagogic tricks aren't working this time, that instead of the Republicans caving in deference to his dictatorial demands, they are united and holding firm, and that he, not the Republicans, is cratering in the polls.

The apparent panic of the mainstream media liberals is another good barometer. From ABC to NBC to CNN, liberal hosts are increasingly anxious and combative toward Republican congressional leaders who fearlessly accept their invitations to sit for combative ambush interviews.

CNN's Candy Crowley was particularly frustrated with Sen. Ted Cruz's unwillingness to affirm any of her negative predispositions and accusations against him and other Republican leaders. He simply would not take the bait as she pressed, over and over, to get him to openly concede that the GOP is responsible for having shut the government down.

At every turn, Cruz batted away Crowley's pointed jabs, allowing her no openings -- not even any courtesy sympathy points. No, he would not admit that the Republicans had shut down the government or were obstructing a compromise. President Obama flat-out refused to negotiate, and House Republicans have sent him bill after bill authorizing the funding of government, with each one being summarily rejected by his First Person-ness.

On NBC's "Meet the Press," Sen. Rand Paul similarly denied host Savannah Guthrie any foothold in her attempted battle formation to take him down. He would not permit her to characterize the shutdown as the fault of the GOP or confess that Republicans had failed to submit the dictatorial Obama a "clean CR."

To the contrary, Paul insisted that Congress had sent the Senate no fewer than six clean bills, which it could have approved as is and sent to President Obama for his signature.

She thought she'd nail him, though, by playing a clip of Paul talking to Sen. Mitch McConnell wherein Paul said he believed that the GOP strategy is working and that they are going to "win." Paul would not take the bait and assured her that the Republicans aren't viewing this as some partisan game but that the best interests of the nation dictate that Obamacare be stopped in its tracks. By "winning," Paul meant that he thinks the Republicans are going to succeed if they maintain their current course.

"We've been offering compromise after compromise," said Paul. "But you hear from the president and his men and his women, 'No negotiation.'"

Guthrie persisted, suggesting that "compromise" would involve accepting parts of Obamacare at least. "What part of Obamacare do you like and want to keep? Which half of it?"

Again, Paul wouldn't bite. He told her in no uncertain terms that he does not like any part of Obamacare and that his role is to provide oversight for legislation. His Kentucky constituents overwhelmingly oppose Obamacare, and he intends to fight it. The compromise was in allowing the remainder of the budget bill to go through as it was. Contrary to Guthrie's implication, Republicans were not playing games, said Paul, by passing piecemeal legislation and sending it to the Senate. This is the way Congress used to work and is supposed to work.

Cruz made the same point to Crowley when she accused Republicans of blackmail with the piecemeal approach. "For hundreds of years," Cruz said, "the way Congress is appropriated has been one topic at a time. How is it blackmail to say, 'We think we should fund the veterans? Do you agree?' That's a yes-or-no vote. Now, Harry Reid refuses to let the Democrats vote on that. But how is it blackmail to say, 'We may not agree on everything, but is there anything we can agree on?' We ought to agree on supporting our veterans."

Cruz and Paul's refusal to surrender to pressure from Obama, Senate Democrats, media liberals and establishment Republicans is energizing the grass roots throughout the nation. People are cheering them on social media and in neighborhoods across America.

Establishment Republicans strongly criticized Cruz for allegedly refusing to honor party rules and succumbing to the wishes of his more seasoned colleagues to stand down. But he refused to allow them to force him inside that Beltway box that has crippled their imagination, their courage and their willingness to fight for the people.

People are witnessing the frightening rollout of Obamacare, with its exorbitant costs and its assault on our liberties. The people are seeing firsthand that Obama has been dishonest from the beginning about every aspect of this law. They are also aware that he is not the nonpartisan he pretended to be but a dictatorial statist who is driving our nation into bankruptcy. In addition to Obamacare, Obama simply refuses to rein in government spending.

But if Cruz and Paul had not stood up and grass-roots conservatives had not held tough, the public would have assumed, as usual, that Republicans had lost their willingness to fight for them and were resigned, essentially, to one-party government.

Republicans may not win this round, but they've already come much further than the pessimists predicted and, as a result, given patriots reason for hope again.

Obamacare, as Cruz pointed out, will not automatically implode, if at all, without first doing irreparable damage to our health care system. He and Paul and the rest of the fighting Republicans understand that this is indeed a hill to die on.

We must continue to cheer on and rally behind the Republicans who are fighting in the arena on behalf of the American people.