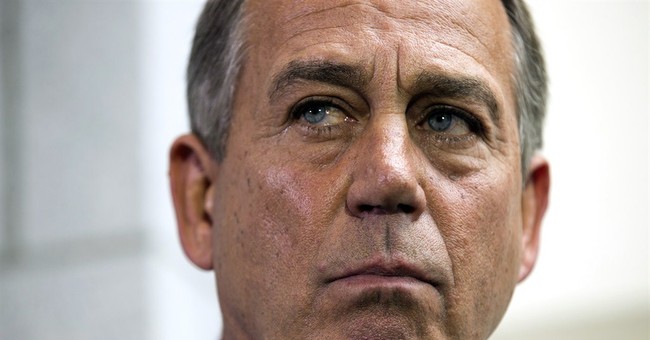 Trending
Why is it just assumed Republicans will automatically be blamed for any government shutdown over a budgetary impasse between Obama and his Democratic Party and Republicans?

More disturbingly, why do so many Republicans and right-leaning commentators surrender before we've even begun to fight?

Do our moderates believe there is any position President Obama and the Democrats could take that would result in the public's blaming Democrats, rather than Republicans, for a shutdown?

The moderates always cite polls that say Republicans will be blamed, but who decreed that polls are set in stone? Which Republicans, when they were campaigning for election, promised to govern according to the polls and not their principles?

But if we must discuss the polls, let me ask you to consider what would happen if the pollsters framed their questions as follows:

"Will you support efforts by congressional Republicans to defund Obamacare, even to the point of a government shutdown, because they believe it is the greatest destroyer of jobs today in America, it will reduce access to and the quality of health care, it will not ensure coverage or care for everyone, it will not allow people to keep their own doctors or their own plans, it will cost the government at least twice what Obama promised, it will not reduce the health care expenses of a typical family of four by $2,500 as Obama promised but increase them by some $7,400, it is such a legislative mess and so burdensome that many have demanded to be exempted from its various provisions and President Obama, in disregard of his own health care law and of the Constitution's separation of powers doctrine, granted, by executive fiat, special exemptions and delays to some and not others, and that the Internal Revenue Service, which has been caught red-handed abusing its power against the administration's political opponents, will be in charge of enforcing Obamacare?

"And, dear voter, wouldn't you agree that it's a bit unfair to conclude that Republicans are mainly at fault for shutting the government down when the Democratic Senate has continually ignored its legal duty to pass budgets, Senate Democrats have flat-out announced they won't negotiate and have leaked their secret desire that the government shuts down so they can demonize the Republicans, and Republicans have, in fact, passed several budgets, which only exclude the funding or delay the implementation of Obamacare, a law that is very unpopular with the American people?"

Of course, we'll never see poll questions so patently loaded, especially in favor of the Republican position. And we shouldn't. But we do see slanted poll questions all the time, subtly nudging the participants toward a desired response. I'm sure that's the case here.

But we shouldn't be defeated by poll questions based on a snapshot in time and based on fixed assumptions that don't allow for any change in public opinion based on future events and communications. Unless he is clairvoyant, no pollster can factor into his questions the precise unfolding of events leading to and after a shutdown, and the possibilities of how they're communicated are endless.

Polls can't possibly predict to any degree of reliability how the public would respond to a shutdown if Republicans finally united and articulated a compelling case to the public before and during a shutdown, including the points contained in my absurd hypothetical poll questions.

What if Republicans got together, instead of shooting one another in the backs, and made those points and also hammered Obama for refusing to come to the table on real spending and entitlement cuts?

Objectively speaking, Obama's position all along has been indefensible. Almost nothing he's said about Obamacare is true -- and this can be easily demonstrated. He will not do anything about our short- and long-term spending problems, and he and his party are the ones who are absolutely refusing to negotiate in good faith, if at all, on these budgetary issues.

Though I respect my more moderate friends on the right and don't wholly discount their position, I believe that their default defeatism and their friendly fire against principled conservatives such as Ted Cruz are damaging the GOP's chances of convincing the public of the unreasonableness of Obama's position and the reasonableness of their own.

I believe that if Republicans would finally draw a firm line in the sand and then go to the media with a united, 24/7 communications effort, they would -- with their courage, their principled stand and their contagious patriotism -- reignite the grass roots and inspire many others to recapture an optimistic spirit, a spirit that says that America is not yet dead and that there are still elected officeholders who are willing to stake their careers on saving this nation.