'Defund Now, for When Shall We Be Stronger?' 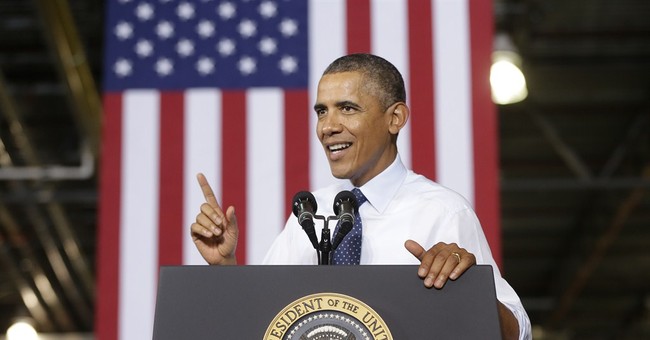 "They tell us, sir, that we are weak, unable to cope with so formidable an adversary. But when shall we be stronger? Will it be next week or the next year?" Will it be when Obamacare has metastasized into every sector of our economy?

"Shall we gather strength by irresolution and inaction? Shall we acquire the means of effectual resistance by lying supinely on our backs and hugging the delusive phantom of hope? ... Sir, we are not weak if we make a proper use of those means which the God of nature hath placed in our power." We are "millions of people, armed in the holy cause of liberty."

No, Patrick Henry is no longer with us, and the once-tyrannical British empire is not our foe, but this nation -- since it acquired its independence shortly after Henry's call for it -- has never faced such a sustained assault from within on its liberty and its founding principles.

It is high time that the conservative movement, the Republican Party and every American patriot united together to actively and fiercely oppose the statist assaults on our freedoms and, in particular, the legislative menace known as Obamacare.

But a large faction of our fellow patriots on the right tell us -- as they've told us nearly every time we've had a debate with President Obama over the budget -- that we must be more pragmatic and hold our fire because if we fight back too aggressively, we will be blamed for the government's shutting down and it will damage our cause far worse in the long run.

Well, the "pragmatists" usually have prevailed, but their predictions haven't. We always ended up caving -- though often the pragmatists have rationalized our defeats as victories -- and President Obama won re-election anyway.

It didn't have to be that way. I believe that we have more informed, freedom-loving patriots in this country yearning for a restoration of our founding principles than we've had in decades and that they are just longing for political leadership around which to coalesce -- and go to war, figuratively.

Some of the pragmatists accuse the defunders of allowing our passions to overpower our reason or of self-serving intellectual dishonesty; we allegedly know we can't defund but are angling to enrich or empower ourselves by pretending otherwise.

Some defunders, in turn, cast the pragmatists as RINOs -- Republicans in name only. Many are, but I happen to believe that most on both sides of the intramural debate are honorable and at least somewhat right-of-center.

I agree, in part, with the pragmatists that this is an argument over tactics, but I think it is more than that. I believe that the defunders are more alarmed over the current state of affairs in this nation under Obama and rightly convinced that we don't have a lot of time left to prevent the Obama juggernaut from "fundamentally transforming the nation" and bankrupting us. We may agree on the strategy of restoring Republican control of the executive and legislative branches, but we probably don't fully agree on the precise ideological makeup of that majority or on whether Obamacare -- and the rest of the Obama agenda -- is ultimately tolerable.

The pragmatists point to the polls, which allegedly say the GOP will be blamed -- no matter what -- for a government shutdown. Well, I don't trust how any such poll's questions were framed. I don't believe that any poll can accurately forecast something as dynamic and uncertain as a national debate that hasn't yet fully unfolded. And I agree with Sen. Ted Cruz that we have already come further than the naysayers thought we would and that our side, with unity and resolve, might just be able to rally public support behind our cause in opposing this woefully unpopular legislation in the event of a shutdown -- particularly a shutdown that Obama himself will have brought about by refusing to allow the government to stay open for everything but Obamacare. A unified leadership might be able even to change some votes in the Senate. This is not that far-fetched when considering all the ammunition leaders will have at their disposal, including the report from The New York Times that lower health insurance premiums may come at the cost of fewer choices for patients -- as many of us Obamacare opponents have long predicted -- and the Forbes report that Obamacare will increase health care spending by $7,450 for a typical family of four.

Changing the outcome in the Senate may be unlikely, but what is far from certain is that the GOP will be damaged, on balance, if a shutdown occurs because Obama insists on preserving Obamacare at all costs. Though no one on either side knows for sure, I think that fighting a defunding battle, even if Republicans lose, will greatly enhance, rather than diminish, the GOP's prospects in 2014 and 2016.

The pragmatists always seem so fatalistic and defeatist in these battles, surrendering before we even begin the fight. But there is no telling how many millions of Americans have become wholly disillusioned by the GOP's reluctance to fight Obama and to offer an inspiring alternative agenda. These people -- millions, armed in the holy cause of liberty -- are craving leadership from Republicans who understand the gravity of our current path, and they will rally around it in surprising numbers if Republicans provide it.

You want to talk pragmatism? Once Obamacare is fully implemented, it will not implode of its own weight as our pragmatic Pollyannas predict. Behemoth entitlements never do.

If we are to roll back Obama's destruction, we have to begin, at long last, to fight as if the future of the country is on the line -- because it is.