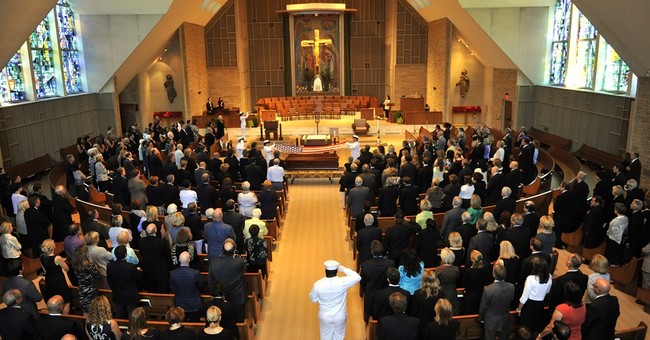 Trending
You may say that there is no discrimination against Christians in America or casually dismiss it because Christians need no protection here because this is allegedly a Christian nation.

But there is plenty of such discrimination, as I documented in my book "Persecution" a few years back.

During the publicity tour for the book, I had a mini-debate with Harvard professor Alan Dershowitz on CNN, as I recall. Dershowitz, who was very respectful and who is unquestionably quite intelligent, advanced a curious argument that night.

If memory serves, he suggested that it is absurd for me to argue that Christians face any real discrimination, because the overwhelming majority of Americans are Christian. I found this bizarre, as the majority of Americans are also women, and the last time I looked, no one ever challenges the women's rights movement on the basis that majorities are inherently insulated from discrimination.

Our laws don't say that everyone except for members of majority groups is entitled to equal protection of the laws. They don't forbid discrimination against only members of minority groups.

Not to mention that these days, despite nominal affiliations, you have to wonder whether the majority of Americans truly are Christian, but that is another matter.

There is no question that our liberal secular culture frequently targets Christians and Christian practices for discriminatory treatment and rails against the expression of Christianity by public officials or the presence of Christian symbols in the public square. My book is replete with nearly 1,000 examples, from the banning of Christmas trees in public buildings to the censorship of high-school valedictory speeches with references to Jesus Christ, from the denial of access to public facilities to certain Christian groups to the forbidding of the voluntary exchange of Christmas cards in some public school classrooms. Some even make the outlandishly specious argument that the Constitution forbids public officials from permitting their Christian beliefs to inform their policy positions.

Many of the discriminatory acts are not grounded in the law, and there are many highly competent public interest law firms specializing in religious liberty that do a great job of vindicating Christian liberties, but the problem goes beyond what is legal and what isn't.

Despite the law, discrimination against Christian liberties persists, and not everyone files remedial lawsuits. The prevalence of political correctness fosters a climate of intimidation and also causes many to assume Christians have less liberty than they do.

For example, many assume high-school administrators are within their rights to prohibit Christian references in valedictory speeches on the spurious ground that they violate the establishment clause of the Constitution. It apparently never occurs to them that when a student refers to Jesus Christ, he is merely exercising his religious liberty under the free exercise clause of the Constitution or a similar provision of a state constitution.

Though both of those clauses in the First Amendment exist to protect religious liberty, the government's practice, as shown by these public school actions, is often to stifle religious liberty in the phony name of protecting it.

A similar misunderstanding -- and I'm giving the offending party the benefit of the doubt here -- is behind a Millington, Tenn., elementary teacher's forbidding her 10-year-old student from choosing God as her subject in an assignment to write about the student's "idol."

Fox News' Todd Starnes reported that the student, Erin Shead, told her mother that her teacher wouldn't allow her to use God because it had something to do with religion and that she had to take her paper about God home because it could not remain on school property. Note that the teacher didn't forbid the student's choice of God on the grounds that God is not a person and thus outside the scope of the assignment. (We'll not explore here the Christian doctrine that Jesus Christ was fully human and fully God.)

No, the ban was apparently on "church/state" grounds. A spokesman for the school district, according to Starnes, said, "Teachers are prohibited from promoting religious beliefs in the classroom."

Fine, but what does that have to do with the incident at hand? This was a student, not her teacher, discussing God.

Our culture is so paranoid about the expression of Christianity in government-owned facilities that some teachers obviously believe that they must forbid their students from voluntarily writing about the God of the Bible in a harmless school assignment.

Can someone please explain how the student's unprompted selection of God as a subject for her assignment violates the Constitution's prohibition against establishing a national church?

It is a sad commentary that militant anti-Christian secularists have bullied passive, lukewarm Christians in our society into surrendering their fundamental religious liberties in so many cases.

Whether the aggrieved parties prevail in correcting this action in Tennessee, the fact remains that Christians' apathy and fecklessness are responsible for allowing such tyranny against their own religious liberties -- liberties whose protection was at the very forefront of the foundation of this nation.