On Syria, Obama Is All Over the Map 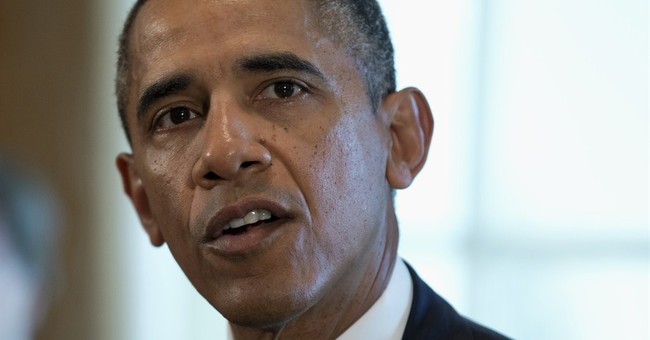 Trending
When it comes to President Obama's prowess as commander in chief, "leading from behind," at this point, would be a step up.

Some believe that the United States should engage in military action in foreign countries when America's national interests or those of our allies are at stake. Some believe we should rarely do so, perhaps only when we are under attack. Some think we should actively export democracy to other nations, whether or not our national security interests are currently on the line. And some, like President Obama, are literally all over the map, a quagmire of incoherency.

Since President George W. Bush intervened in Iraq in 2003 with overwhelming approval from both parties in Congress, Democrats have been on their high horse, accusing Bush and Republicans of all kinds of abominable behavior on Iraq and in the war on terror.

In withdrawing their support for the war, wholly for political reasons, Democrats made the preposterous claim that Bush, a man whose intellect they accorded the respect of a medieval serf, had deceived them into supporting the Iraq War resolution by false or hyped claims about weapons of mass destruction.

It didn't matter to them that investigations showed that Bush clearly hadn't manufactured, doctored or misrepresented the intelligence about WMD in Iraq or that most of the world's important intelligence agencies came to the same conclusions as ours had. Nor did it matter that they had reviewed virtually the same intelligence reports that Bush had when they decided to support the war resolution and that we mustered the support of much of the international community.

When it was in their perceived political interests to support the war effort and apparently too much time hadn't passed since Sept. 11 to give them the required cover, they supported it. But when they needed to undermine Bush's clout as a war president, they shamelessly changed their tune.

They started clamoring about the indispensability of an international consensus before going to war. They were impervious to claims that Saddam Hussein had brutalized his own people, including with the use of chemical weapons. They went out of their way to deny any link between Saddam and the war on terror and our enemies in that war. They were unmoved by Saddam's violation of countless United Nations resolutions.

Democrats trampled one another on the way to the podium to assert that President Bush was a militaristic ogre who lied to get us into war. They manufactured and broadcast wildly exaggerated and spuriously deceitful claims about the deaths and damage America had inflicted in Iraq.

When he was running for president in 2008, Barack Obama strongly emphasized these same criticisms of Bush and the Republicans. Under their leadership, the world had lost its respect for us. Obama promised to change all this and make America beloved in the world.

Based on their statements, we must conclude that Obama and his Democrats abhor doublespeak from America's commanders in chief and military interventions that are not supported by the international community and are based on dubious intelligence about weapons of mass destruction.

Yet after Obama's disgraceful double talk concerning a "red line," the Democrats almost unanimously support Obama's apparent decision to strike Syria with or without congressional approval -- despite there being a conspicuous absence of any understandable foreign policy objective, no discernable national interest at stake, unequivocal disapproval from the American people, little support from the international community, questionable intelligence about the chemical weapons, and a substantial risk that the intervention could ignite major disruption in the region, empower Islamic radicals hostile to the United States, which seems to be the common denominator driving all his interventions, and otherwise jeopardize America's interests and those of our ally Israel.

The only reason anyone can figure for Obama's deciding to bomb Syria is that he believes he must do so to save face and credibility for having drawn a "red line" against the Syrian regime's use of chemical weapons, a line he now says he didn't draw -- as if he'll enhance his credibility by denying he made a claim we witnessed him making in no uncertain terms. He is now demeaning the very international community he libelously accused Bush of alienating for not joining us in this ill-considered action.

The left is all about opposing military interventions -- when Republicans are in power and our proposed intervention is truly in our national security interests. Leftists are all about enlisting the support of the international community when it suits their interests -- and ignoring it when it doesn't. They're adamant about the necessity of being 100 percent certain about our intelligence data before acting militarily, except when they're in charge. And they're all about plain-spoken words from the commander in chief, unless they hold the presidency.

I could have sworn that President Obama and his party decried so-called unilateralism when they falsely claimed Bush had engaged in it. But now they enthusiastically embrace it when Obama is preparing to actually do it -- acting unilaterally with respect to both the legislative branch and the international community.

Whether or not the entire international community loved President George W. Bush, they respected him -- to the extent that world leaders knew he meant what he said. Obama has neither their love nor their respect.

It's obvious he hasn't a clue what he's doing, but it's just as obvious he's hellbent on doing it. What a pathetic mess.