Private and Public Character and the Endurance of the Republic 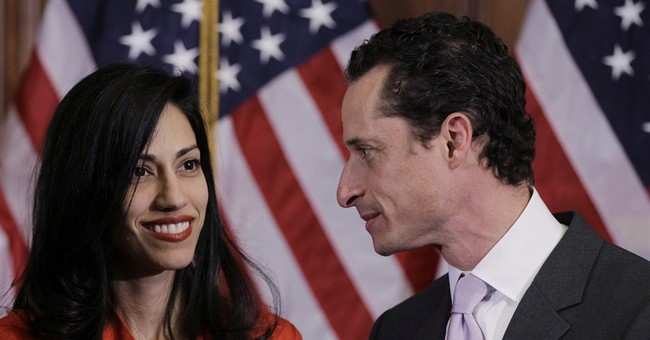 The sexting scandal of Anthony Weiner, the disgraced former congressman and current New York mayoral candidate, puts into focus the importance of character to public service.

Weiner's texts, tweets and photos show not just a tawdry person but a risk-taking, deceitful individual who continued his serial texting and lied about it even as he prepared to run again for office.

His wife, Huma Abedin, is standing by her man and expects the public to defer to her judgment as to his fitness for office.

It is Abedin's personal business as to whether she will forgive and support Weiner, but it is presumptuous and wrongheaded for her or Weiner's supporters to lecture voters about how they should exercise their prerogative in assessing his suitability.

This bizarre notion that we should separate our public officials' private behavior from their public lives gained alarming credibility during the Clinton years, when the president's enablers adamantly insisted that all of his improper behavior was private and of no concern to the public.

"It's a private matter involving sex," they chanted, attempting to immunize even Clinton's felonious perjury from investigation because the underlying facts about which he testified and lied "concerned a private matter about sex."

They used the same mantra to paint as private, irrelevant and innocuous his episodes of oral sex in the Oval Office with a young intern -- a textbook example of sexual harassment because of the power disparities between those involved.

In this postmodern age, many -- especially secular liberals and partisan Democrats -- are all too eager to demand that private and public character be separated. All that should matter is whether a public official's policies, especially economic policies, are successful.

Common sense, experience and fundamental ethics tell us it's folly to believe we can separate a politician's private character from his public performance -- that the success of an official's policies is all that should matter.

Christian apologist Ravi Zacharias observed: "We know that the premise of privatization is flawed because who we are in public is determined by what we have learned and cherished in private. ... One cannot help but wonder what would have happened to the United States if a man of Lincoln's character had not been president at her most painful time of internal strife as brother fought against brother. ... It is a mindless philosophy that assumes that one's private beliefs have nothing to do with public office. Does it make sense to entrust those who are immoral in private with the power to determine the nation's moral issues and, indeed, its destiny? One of the most dangerous and terrifying trends in America today is the disregard for character as a central necessity in a leader's credentials. The duplicitous soul of a leader can only make a nation more sophisticated in evil."

Indeed, the Framers understood the vital importance of our leaders' virtue and character to the success of the Constitution and the very endurance of the republic. John Adams famously said: "Our Constitution was made only for a moral and religious people. It is wholly inadequate to the government of any other."

Author Joseph Ellis, in his book "Founding Brothers," makes the same point poignantly in discussing Alexander Hamilton's relationship with Aaron Burr: "The problem ... was that the putative barrier between personal and political criticism, or private and public behavior, kept getting overwhelmed by real choices. Personal character was essential in order to resist public temptations." And: "Character mattered because the fate of the American experiment with republican government still required virtuous leaders to survive. Eventually, the United States might develop into a nation of laws and established institutions capable of surviving corrupt or incompetent public officials. But it was not there yet. It still required honorable and virtuous leaders to endure."

Ellis' observations are profound, except that he seems to fail to understand what the Framers grasped: that no matter how brilliant the Constitution, no matter how developed we become as "a nation of laws and established institutions," we could not permanently survive a ruling class that is bereft of respect for its founding principles and the rule of law or is of consistently dubious character.

The private behavior of our public officials matters because it is a reflection of their character, and their character will strongly influence their public actions. And their obedience to the Constitution and rule of law matters; indeed, it is essential for the endurance of the republic.

Anthony Weiner aside, when we have a president of the United States who daily demonstrates his disrespect for our founding principles and routinely flouts the rule of law, it is devastating to our liberties.

When Barack Obama acts unilaterally outside the scope of his constitutional authority to issue executive orders to implement provisions of the DREAM Act or environmental rules over Congress' objection or to delay implementation of Obamacare and then scoffs dismissively when asked whether he consulted lawyers on his authority to do so, he is out of control.

Do not get lost in the sordid aspects of the Weiner affair and allow them to obscure your focus on the larger issues of character and respect threatening our republic today.