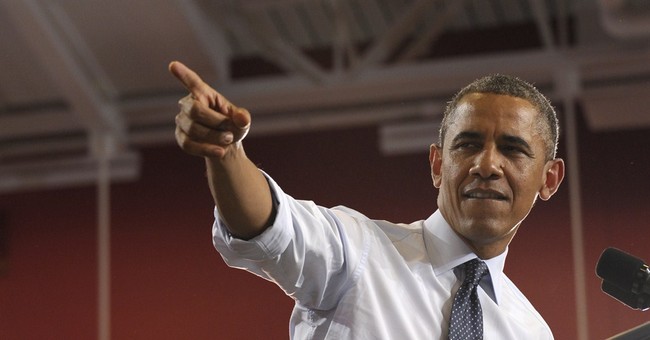 Sometimes I marvel at President Obama's apparent lack of an embarrassment sensor. How can he stand before the American people and deliver speech after speech making the same tired points and pretending he is delivering the speech of the century?

Is he truly impervious to feelings of self-consciousness, or is he trying to play us for fools?

His speech at Knox College on the economy contained all the ingredients of a vintage Obama speech: much fanfare about little substance; a stunning distortion of his record across the board, especially on the economy; refusal to accept responsibility and blaming others for the problems he's caused; his ludicrous portrayal of himself as an outsider pitted against the Washington political class he heads; predictable appeals to class warfare; tried-and-failed prescriptions for "growing the economy from the middle out"; his professed identification with the middle class, which his policies are devastating; his cynical dismissal as phony distractions of a raft of real administration scandals that would have brought other administrations to their knees; and an expression of affinity for government, not the American people, as the solution for all of our problems.

The upshot after Obama's nearly five years in office is that the economy is still sluggish. Unemployment and annual deficits remain disturbingly high based on historical standards; our national debt and unfunded liabilities represent an existential threat to America; Obamacare hangs like an ominous tornado playground over the economy and every employer and health care consumer in the nation; America is in steady economic and military decline at the hands of a president who is in denial about it, indifferent to it or intentionally pursuing it; and the president and his renegade Justice Department and administrative agencies are riddled with scandals and gleefully flout the Constitution, the rule of law and the legislative branch.

Yet despite all of this, Obama tells us that everything is great and that things would be even better if it weren't for partisan, obstructionist Republicans. (If the economy is so wonderful, why is Obama hopscotching the country trying to convince us of what should be self-evident?)

Obama's refusal to accept responsibility for his policies and his scapegoating have reached comical proportions. Indeed, his economic adviser Austan Goolsbee once virtually admitted that Obama should only be associated with his economic record if and when we begin to see sustained positive results.

Such is the mentality of ideologues. No amount of failure is proof of their policies failing. Others must always be blamed.

Obama no longer dazzles us with his smoke and mirrors; he bores us with them, droning on and on for more than an hour without offering any new ideas to turn the economy around -- because he has none.

Obama is as bereft of new ideas as a ventriloquist's dummy. He is a prisoner of his own theological affinity for expansive government as a panacea. His liberal ethical code tells him that growing government is a moral imperative that must supersede everything else, even economic growth and prosperity for the very people to whom liberals claim allegiance.

As long as they are reliably growing government, statists such as Obama will not be held to account by their fellow liberals for their policy failures and for spreading misery, because they are doing god's work, whatever that might mean to them. If his "stimulus" fails to produce jobs, it doesn't matter, because a) his intentions were good, b) Republicans didn't let him spend even more, and c) things would have been worse without it -- even though the weight of the evidence and history prove otherwise.

So don't ever expect Obama's soul mates in the liberal media to hold him accountable for his record or to compare it with that of other presidents. If it is worse, it will not be his fault. His failures will always be because of the "mess he inherited," even though no other president has ever enjoyed that absurd luxury.

But even measured against the situation he inherited, Obama has made sparse improvements, and in most cases, things have gotten worse, including the millions who have given up and left the workforce, the millions who have joined the government dependency rolls, the catastrophic national debt and our woefully insolvent entitlement programs, which he steadfastly refuses to reform.

For all his hoopla about hope and change, Obama is nothing more than a gloom-and-doom liberal who doesn't even aspire to robust economic growth. His sole focus is not on growing the economic pie but on redistributing what he believes is a finite one.

That's why the thrust of Obama's disgraceful speech was on class envy, resentment and warfare. He forever castigates producers and the wealthy and promises a continuation of policies that are antithetical to growth, except for the growth of government.

As long as Obama is in office and his policies are pursued, America will be shortchanging itself and suppressing the entrepreneurial spirit and liberty of the American people, without which America is destined for ongoing decline.