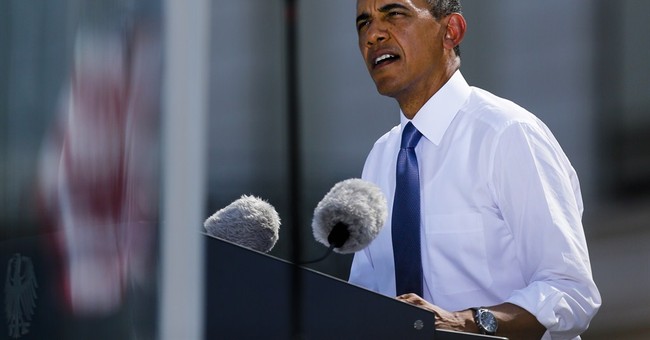 It's as if President Obama believes he's still in the faculty lounge at Harvard glamorizing leftist ideals, seemingly oblivious that he is actually president now and that his duties require him to work on truly pressing matters instead of fantasizing about Utopia.

But in Berlin, with the disposition of Alfred E. Neuman, the blind destructiveness of Mr. Magoo and the flimsily emulated elegance of JFK, he lectured the world on the urgency of adopting his slightly modified faculty lounge agenda.

As if having freshly emerged from a nuclear freeze seminar, Obama spoke dreamily of arms reduction between the United States and Russia. Never mind that rogue nations are on a fast track to developing nuclear capabilities and that Obama has already scaled down our vital missile defense systems, gutted our military space research and development, and shelved jet fighter programs. Rather than recognize the ever-growing dangerousness of the world, Obama defers to his reality-averse ideology. In his mind, after all, the war on terror is already over.

Conspicuously bereft of the phony magic that accompanied him on his 2008 trip, he told a shrinking German audience that climate change is "the global threat of our time." This national-sovereignty-eschewing executive of the world said: "With a global middle class consuming more energy every day, this must now be an effort of all nations, not just some, for the grim alternative affects all nations. More severe storms, more famine and floods, new waves of refugees, coastlines that vanish, oceans that rise -- this is the future we must avert."

Yes, global warming, er, climate change is conveniently apocalyptic, because it is flexible enough to accommodate any and all disastrous events -- natural or man-made, weather-related or otherwise, and events that are completely contradictory. The theory is broad enough that it can never be discredited, even if its proponents are caught scandalously manipulating the data. If we have more tornadoes and hurricanes or fewer, if we have milder summers and winters or harsher ones, if the Earth has been cooling for the past 15 years and even if bitter clingers are stockpiling AK-47s at an unprecedented degree, you can be darn sure global warming is the culprit. So of course it's the most pressing problem of our time.

In fact, if we would just tame this dread monster, we wouldn't need religion anymore, because man and nature would have achieved perfectibility. Of course, for global warming zealots, environmentalism is the one true religion, and faith in God (save Gaia) is passe.

I am nonetheless laboring in vain to divine Obama's perceived causal connection between climate change and the economic calamity he's presiding over, including our ever-exploding national debt, but I assure you there is one.

With his charisma deflating like a punctured balloon and his rhetoric stale, flat and irrelevant, he struck out, as well, in Northern Ireland, where he either clumsily or intentionally offended Catholics with his remarks on segregated, sectarian schools.

Obama said, "If towns remain divided -- if Catholics have their schools and buildings and Protestants have theirs, if we can't see ourselves in one another, if fear or resentment are allowed to harden -- that encourages division; it discourages cooperation."

While Obama is adamant about Muslim sensitivities, to the point of deliberately ignoring jihadist behavior in security investigations, he has almost gone out of his way to offend Catholics and other Christians, from abortion to conscience rights to embryonic stem cell research. And it's working.

Catholic World News reacted with this: "Ironically, President Obama made his comments just as Archbishop Gerhard Muller, the prefect of the Congregation for the Doctrine of the Faith, told a crowd in Scotland that religious education upholds the dignity of the human person. Archbishop Muller said that Catholic schools should promote 'all that is good in the philosophies of societies and human culture.'"

The Rev. John Zuhlsdorf wrote: "Another example of what this man wants: total isolation of any religious values in the private sphere alone. Pres. Obama is working either to intimidate or legislate or even TAX religious freedom out of the public square."

Isn't it a bit bizarre that a man who trades in divisiveness is so quick to lecture others about disunity? Isn't it pathetic that in the very process of urging others toward unity, he alienates large segments of his audience?

Not only is Obama's stock plunging in the United States but also his probable ambition to be president of the world may be in jeopardy.