Obama's Twofer Appointments a Double-Bird to the People 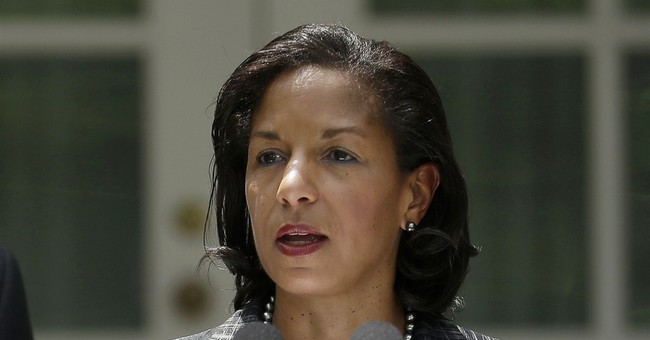 Trending
Just try to wrap your arms around the magnitude of defiance and chutzpah that led to and accompanied President Obama's appointment of the discredited Susan Rice as national security adviser. But don't let this outrage distract you from his equally disturbing appointment of leftist Samantha Power to replace Rice as UN ambassador.

Though Democrats and their supporting liberal media, with a few notable exceptions, have aggressively downplayed the multifaceted Benghazi scandal, none of them has laid a glove on the irrefutable claim that Rice delivered talking points altered by the administration to distort the facts in order to mitigate any damage to Obama's reelection efforts.

In December, Rice withdrew her name from consideration for secretary of state because "the confirmation process would be lengthy, disruptive and costly." Yes, because there was no way she was going to be confirmed after mouthing lies to the American people about the cause of the attacks on our embassy in Libya that resulted in the murder of four Americans.

In a piece for the Washington Post explaining her decision to withdraw, Rice did everything but acknowledge her wrongdoing. She said, "I have never sought in any way, shape or form to mislead the American people. ... Even before I was nominated for any new position, a steady drip of manufactured charges painted a wholly false picture of me."

Well, if she didn't seek to mislead the American people, then someone higher than her in the administration sought to and did mislead her and used her to deceive the people by repeating a steady barrage of manufactured lies to paint a wholly false picture of what precipitated the terrorist attack on our embassy.

We knew then and we know even more certainly now that this was a premeditated terrorist attack and not a spontaneous occurrence spurred by angst over an obscure anti-Muslim video. We know that the administration knew that, as well, and deliberately said otherwise at least in part to protect Obama's narrative that he had al-Qaida and other radical Islamists on the ropes prior to the November election.

If Rice wasn't lying, she owed it to the American people to help determine who put her in the position of unwittingly defrauding the public about a matter of vital importance.

But Obama, Rice, and the rest of the administration have just thumbed their noses at Congress and the American people and arrogantly refused to explain themselves.

Now Obama is rewarding Rice for her fierce loyalty with an appointment to a position arguably as influential as secretary of state and one for which she will not need to be confirmed. He is also counting on her continued deference in placing his personal interests above those of the nation.

With Obama's brazen appointment of Rice to this position, he is saying either that Rice didn't lie (in which case someone else in the administration did, including possibly himself), or that she did lie and he is perfectly fine with it, maybe even grateful for it. Obama might as well say to us, "I don't really care what you think about our bogus story concerning the video. It got us through the election. I won."

If Obama insists on stubbornly clinging to the story that Rice did not know she was broadcasting falsehoods, then he should tell us who did know. But he's Obama. That's not going to happen.

Equally troubling is Obama's selection of Samantha Power to replace Rice. In announcing Power's appointment, Obama praised her as "a relentless advocate for American interests and values." But is she?

In 2003, Power called for a "historical reckoning with crimes committed, sponsored, permitted by the United States." In a piece in The New Republic, she advocated a "doctrine of the mea culpa," which essentially involves the United States owning up to its alleged past foreign policy abuses to put itself in a better light to rest of the world.

Is this not exactly the attitude Obama has expressed in his ongoing apology tour at home and abroad, always anxious to throw this nation under the bus and distance himself from its pre-Obama history? Those who have pooh-poohed this accurate characterization of Obama's blame-America-first approach should take note that Obama has now boldly reaffirmed this very worldview with his appointment of Power.

The Power appointment also further validates Obama's critics who have accused him of being a poor friend of our ally Israel. Space limitations don't permit elaboration here, but Paul Mirengoff at the Powerline blog has described Power as "virulently anti-Israel" and "Israel hating" and supports his assertion in these two posts.

Obama's two appointments show that even as he is under heavy criticism for a smorgasbord of scandals, he is utterly undaunted. He "won" the election, and he is going to impose his agenda for transformational change no matter what and militantly ignore all efforts to hold him accountable.

Kristi Noem Says South Dakota's Transgender Sports Bill Will Be the 'Strongest' of Its Kind in the U.S.
Landon Mion
Sec. Blinken Emphasizes 'Diplomacy and Dialogue' on Sunday Shows, Assures 'Swift Response' Towards Russia
Rebecca Downs
University of Washington's 'Inclusive Language Guide' Says 'Grandfather,' 'Housekeeping' are 'Problematic'
Landon Mion
DCCC Torched Over Tweet Claiming Republicans Are the Ones 'Interfering in Your Private Medical Decisions'
Rebecca Downs
Pennsylvania School Board Member to Parents: 'I Don't Work for You'
Landon Mion
Joe Biden on 2022 Midterms: 'We Have to Expand Our Majorities,' GOP is 'Completely Controlled' By Trump
Rebecca Downs