There's Way Too Much Administration Smoke on Benghazi 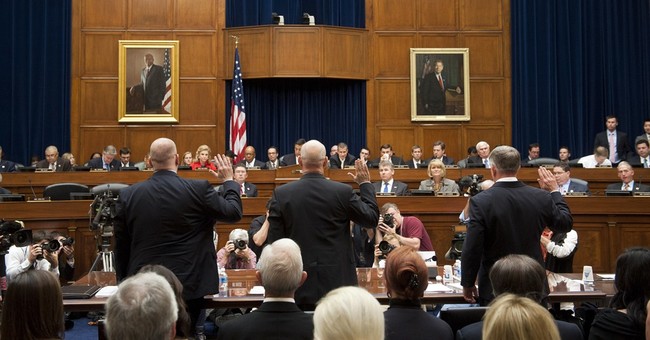 A former National Security Council spokesman, Tommy Vietor, is representative of the arrogance of the Obama administration in mocking the congressional hearings on Benghazi, Libya, which he contemptuously derided as "amateur hour" and conspiratorial.

In a tweet to The Washington Post's Dana Milbank, Vietor mocked Rep. Jason Chaffetz, saying, "What do you think Rep. Chaffetz will disclose today? Moon landing photos? Map of Area 51?"

Let's review a list of just some of the troubling questions that have been raised about this sordid affair and see whether any of them concern people of good will, irrespective of their party affiliation.

Gregory Hicks, the State Department's former deputy chief of mission in Libya, was emphatic in denying that the attacks occurred as a result of demonstrations over an anti-Islam video and was adamant that the administration was well aware of this fact. He said: "The video was not instigative of anything that was going on in Libya. We saw no demonstrations related to the video anywhere in Libya." Hicks said he never told then-Secretary of State Hillary Clinton that it was a protest about the video.

Indeed, Glenn Kessler, the Washington Post fact checker, acknowledged that Hicks provided new information in his testimony when he related that he spoke directly to Clinton the night of the first attack and briefed her, "presumably relaying his conclusions" that there was no demonstration at the consulate prior to the attack.

This is why Hicks said -- when he heard the administration, through U.N. Ambassador Susan E. Rice, stating just the opposite on the Sunday morning talk shows -- "I was stunned; my jaw dropped. And I was embarrassed."

Hicks' reaction is justified, given the administration's obviously premeditated strategy to deceive the American people into believing the attacks were the result of outrage over an Islam-bashing video rather than an organized terrorist attack. Obama and Clinton were up to their necks in complicity in this deceit and even spent $70,000 of taxpayer money on a commercial on Pakistani television apologizing for the scapegoated video. From this we can fairly conclude that the administration was more interested in covering its own rear end by protecting its pre-election narrative that it had terrorism under control than it was in the truth or even in preventing possible negative fallout this false report could cause.

Negative fallout is precisely what it produced. Hicks said that the administration's video yarn "insulted" Libyan President Mohamed Magariaf in front of his own people and reduced his credibility by contradicting his earlier claims that the attack was premeditated. Hicks said Magariaf was "still steamed" two weeks later. Because of this, Hicks said, "I definitely believe that it negatively affected our ability to get the FBI team quickly to Benghazi." The Libyans, said Hicks, wouldn't even secure the scene of the attack.

If Obama and Clinton were truly concerned about Muslims being offended by a video, why would they disseminate that lie and trigger that very effect?

Rep. Chaffetz says that State Department employees were forbidden to talk to him about the incident -- as if the federal government exists of, by and for the administration and not the people.

Was the military team in Tripoli actually denied permission to fly to Benghazi? Hicks asserts that if the U.S. military had flown aircraft over the Benghazi facility after it came under siege, it might have prevented the second attack -- on the CIA annex -- which killed two CIA security officers. Hicks said: "I believe the Libyans would have split. They would have been scared to death that we would have gotten a laser on them and killed them."

Did Clinton's chief of staff, Cheryl Mills, call Hicks and angrily order him not to talk to members of Congress about the attacks as Hicks claims? Did the State Department retaliate against Hicks after he raised questions about the video ruse? Why else was he "effectively demoted" to a desk job?

Why did the Pentagon deny a request from House Armed Services Chairman Buck McKeon for access to documents on the attacks?

Did the Defense Department assessment team stop short of interviewing all people who were involved in the key decisions before issuing its report as State Department official Eric Nordstrom alleges?

Why wasn't security tightened in Benghazi in the months leading up to the attack, especially considering that the consulate had requested it?

And why aren't more people outraged that the producer of this video, regardless of its content, is sitting in jail solely because he exercised his freedom of expression?