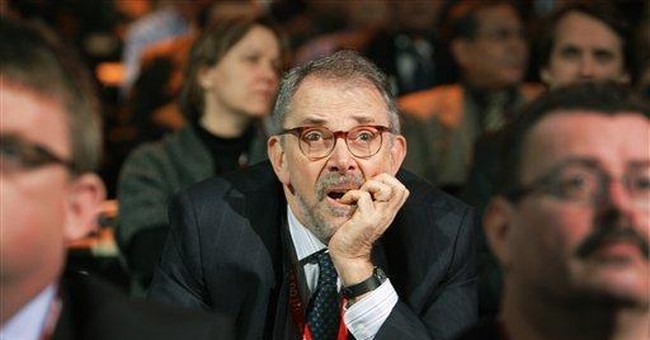 At a time when leftist enviro-tyrants ought to be hanging their heads in shame, they are, instead, taking the offensive. They are not only dismissing the staggering ClimateGate scandal as insignificant but also redoubling and accelerating their push to enslave the world with their progress-swallowing treaties, laws and regulations.

It's the same old leftist playbook: Approach every desired major policy change as a crisis, and demand immediate action. If the public begins to wise up to the distortions and exaggerations, elevate the threat warning from dire to urgent.

We saw it in our domestic politics in the United States when President Barack Obama's leftist Democrats manufactured a simulated crisis over health insurance, deliberately overstating by multiples the number of uninsured as a predicate to Obama's demand that a comprehensive bill had to be passed before Congress' August recess.

Shortly thereafter, it came to light that Democrats had also grossly manipulated the projected costs of their proposals and flagrantly lied about such issues as rationing and government-funded abortions. All the while, these "progressives" concealed from the public the underlying facts and data and their ultimate aims, obliterating Obama's pledge for greater transparency in government.

Like-minded global and American leftists know the jig is almost up on the fabricated global warming "consensus," as the public is catching on to their deception (reflected by fresh polling data) and the ClimateGate scandal has lifted the veil on the leftist scientific community's global conspiratorial corruption. They tell us to pay no attention to the ClimateGate behind the curtain and to join with them in launching the reverse thrusters on modernity and progress in deference to the global warming hoax. Meanwhile, the Obama-leftist Environmental Protection Agency has hedged its bets (in the event Copenhagen is a bust) by declaring the air that we exhale an environmental hazard.

"The evidence is now overwhelming," said Rajendra Pachauri, the head of the United Nations Intergovernmental Panel on Climate Change, unfazed by the ClimateGate scandal and what it says about the integrity and methods of the alarmist scientists. Instead of being humbled by the scandal, Pachauri is attacking those who committed "illegal acts" in "stealing" e-mails documenting the climate fraud.

The alarmists tell us that the incriminating e-mails do nothing to discredit global warming science. Well, if that is true, why did these top-gun environmentalists believe it necessary to cheat and lie? If the science is so clear, why did they have to cherry-pick their data and rig the evidence? Why did they have to "hide the decline" of the "real temps"? Why did someone destroy the underlying temperature records that could either support or undermine their catastrophic conclusions?

Is this the way people of good faith behave? Because climate science, like other sciences, is an esoteric field of study, the public places its trust in the so-called experts in the field. But now these experts have shown their true colors as political hacks.

Although these leftists are trying to tell us that the leaked e-mails are peripheral at best (the U.S. envoy to the Copenhagen summit cavalierly dismissed them as a "small blip"), the reality is that they expose the manipulation of key data on which the entire body of global warming is predicated. We're talking complete lies, built on distortions, founded on falsehoods, facilitated by cynically dishonest methodologies.

As British columnist Christopher Booker says: "What has become arguably the most influential set of evidence used to support the case that the world faces unprecedented global warming, developed, copied and promoted hundreds of times, has now been as definitively kicked into touch as was (Michael) Mann's 'hockey stick' before it. Yet it is on a blind acceptance of this kind of evidence that 16,500 politicians, officials, scientists and environmental activists will be gathering in Copenhagen to discuss measures which ... would ... utterly (transform) the world economy."

Perhaps the culpability of many rank-and-file leftists should be understood in light of their mind-numbed credulity over the alarmists' claims and the Draconian solutions they offer to avert their mythical Armageddon. These leftist sheep seem engaged in a chimerical search for significance apart from God, whose existence their worldview rejects but for whom their hearts cry out in a self-muted cacophony.

But the leaders of the movement are not so innocent. Their sinister intent is to fundamentally restructure the global economy and its allocation of resources, with an eye, ultimately, to one-world government -- or at least ceding control of major aspects of our lives to international bodies.

Am I sensationalizing? The Associated Press reports that Copenhagen envisions a deal to transfer hundreds of billions of dollars from rich to poor countries every year over decades to help them adapt to climate change. And read Danish Prime Minister Lars Loekke Rasmussen's expectations for Copenhagen: "The deal that we invite leaders to sign up on will ... (affect) all aspects of society, just as the changing climate does."