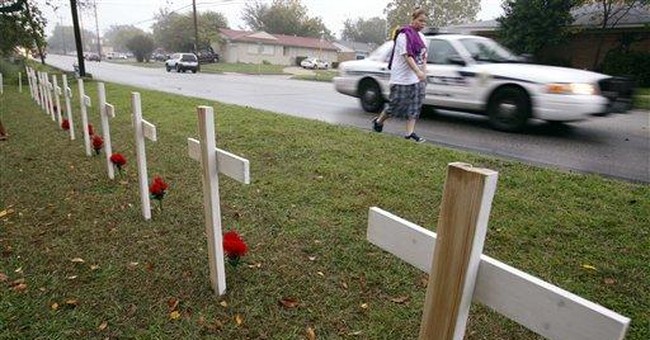 Even as more and more realize oppressive political correctness is damaging our nation and killing our people, we still hold ourselves hostage to it. We can't criticize Obama on his policy agenda without absurd accusations of racism, and now our authorities' first instinct after the mass murder at Fort Hood is to victimize the identified shooter -- Maj. Nidal Malik Hasan -- rather than to protect our soldiers.

The military is the last place we should expect political correctness to flourish. We recognize, after all, that our armed forces exist primarily to safeguard our national security, not as a laboratory for social experimentation. Or do we?

Forget "don't ask, don't tell" policy for now. I'm referring to the reaction of the Army's top brass to the Fort Hood slaughter in the news conference and television interviews following the shooting.

The first question to Army chief of staff Gen. George Casey (and Army Secretary John McHugh) was whether he believed "this was a wake-up call to the nation that the Army is simply too small to carry out the tasks that it's been given." "You've been having suicide rates that are off the charts," the reporter went on. "Your soldiers are under great stress from multiple deployments."

Our military manpower is a legitimate concern, but I think it would be more appropriate for this type of question to come up in the context of whether we have the troops necessary to perform our missions in Iraq, Afghanistan and elsewhere. Instead, it surfaced in relation to whether an overly stretched Army might have contributed to causing this mass murder.

Instead of telling the questioner it's far-fetched, if not outright absurd, to suggest that a soldier committed multiple homicides because he was stressed from an overstretched Army, Gen. Casey dignified the question by responding that our Army has 70,000 more soldiers than it did five years ago and beaming about the Army's new "comprehensive soldier fitness" program, which helps soldiers build resilience and strength to deal with adversity.

A follow-up question was even worse. "Sir, some other counselors are saying this is just the tip of the iceberg. Suicide rates are now higher this year than they were last year. How concerned are you about this danger to recruits?"

Notice that the questioner's concern wasn't over the danger to soldiers of suicide murderers, but of suicide -- that is, what danger soldiers are to themselves as a result of military stress.

What are these people smoking? How lopsided has our thinking become that we view this murder through the prism of the shooter's stress and victimhood rather than focus on how to prevent such murders in the future? Besides, the shooter didn't commit suicide here.

Again, this kind of thinking isn't limited to the liberal press. Neither Secretary McHugh nor Gen. Casey challenged the questioner's implication or emphasis; they eagerly described the Army's "groundbreaking program ... to try to understand the dynamics and the forces behind suicides, particularly in the military."

Nor was their response merely a defensive reflex to a misguided question. Casey volunteered similar boasts about the Army's "huge" mental fitness efforts in his interview with CNN's John Roberts.

Casey -- in this interview and others, on ABC and NBC -- also expressed his concern about a "potential backlash" to Muslim soldiers. On NBC's "Meet the Press," he told host David Gregory, "Our diversity, not only in our Army but in our country, is a strength. And as horrific as this tragedy was, if our diversity becomes a casualty, I think that's worse."

Does anyone really think we're going to discriminate against or expel Muslims from the service as a result of these murders? On the other hand, doesn't the safety of innocent soldiers and our national defense demand that we get to the bottom of why such an obviously radical Islamist was not purged from our ranks and whether inflated diversity concerns handcuffed us and, at least indirectly, led to these murders?

You've surely already heard about the shooter's radicalism, his ties to al-Qaida, his statement that infidels should have their throats cut and boiling oil poured down their throats, his profession as a "Muslim first and American second," his anti-American rants, his harassment of fellow doctors about religion, and our government's paralytic inaction despite awareness of all these things and more.

We're heading the way of Europe in not only our adoption of socialism and smothering of liberty but also our suicidal abandonment of national security. We will survive as a nation only if we radically reverse these trends.