Cloistered Media Libs Don't Get It 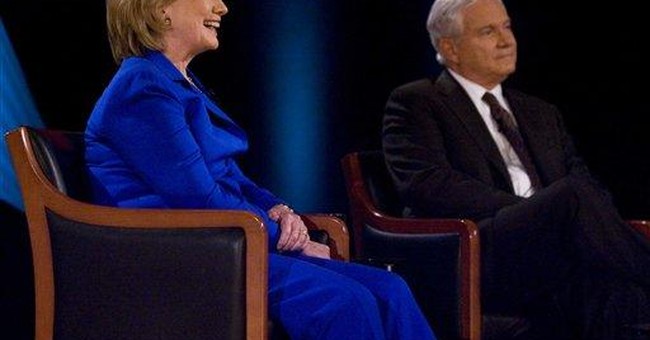 CNN "senior political analyst" Gloria Borger doesn't get it. Like so many cloistered mainstream media liberals, she just can't imagine why anyone would oppose Barack Obama's agenda. To her, it's all politics.

Where was Borger when Democrats, purely for partisan purposes, pummeled President George W. Bush for eight years? But let's stay focused on the present, because Republican opposition isn't about paybacks or getting even.

Borger argues that "Republicans don't really want to work with Obama" because they stand to regain congressional control simply by opposing his agenda without offering any ideas of their own. Their opposition couldn't possibly be grounded in principle because, to narrow-minded liberals such as Borger, the only legitimate ideas are liberal ones.

"In my next life," she writes, "I'd like to be an opposition party leader. What fun to go to work every day knowing you will always be right, largely because your ideas will remain untested. ... If we were in charge, you sing, the people would have tax cuts! More money in their pockets! And no deficits! But more jobs!"

Sorry, Gloria, but our ideas have been tested -- since the beginning of this republic -- and the record is pretty solid, though you might not view America's history with similar pride, given the left's revisionist mindset about America's mythical "imperialism" and capitalistic "exploitation."

As a matter of fact, reductions in marginal income tax rates have consistently stimulated economic growth without exacerbating our deficits, whose growth during the Reagan and Bush years (relatively modest, in retrospect) was attributable to unchecked government spending.

I understand that most liberals have decreed a consensus on catastrophic man-made global warming and barred further public debate despite global cooling for the past decade. But what's truly empirically indisputable is that the Kennedy, Reagan and Bush tax cuts all generated robust economic growth and yielded increases in government revenues. That may seem counterintuitive to you, but what seems counterintuitive to us are liberal plans to deliberately smother the engine of capitalism in order to imperceptibly reduce disputed global warming while other nations are prepared to "stoke their own furnaces" and offset anything we do anyway. Also counterintuitive (and nonsensical) is Obama's plan to dismantle our nukes while terrorist regimes are nuking up.

Conservative foreign policy ideas have passed the test, too. Try Ronald Reagan's "peace through strength" Cold War victory over the Soviet Union. Consider George W. Bush's phenomenally effective post-9/11 national security policies, which prevented any further attacks on American soil. How, by the way, is Obama's appeasement approach to turn us into a beloved nation by, say, our allies in France and Israel working for you? Poland? Tibet? How do you reconcile his affinity for tyrants -- such as Ortega, Chavez and Zelaya -- and his hostility toward democratic regimes in Israel and Honduras?

But if you want to talk "tested," Gloria, let's look at Obama's major domestic ideas. We have the sweep of world history as evidence that his socialistic agenda will destroy our prosperity and our liberties.

You must be impervious to socialized medicine's record of perfect failure everywhere it's been tried, including here (in part), and unwilling to take Obama at his (previous) word that his goal is indeed a single-payer system. You must also be blind to the wholesale fraud in his tested and failed Keynesian backloaded "stimulus" bills.

But how do you defend his populist campaign promises to restore transparency to government and not increase taxes on 95 percent of the American people? His cynical dismissal of claims that Obamacare could cover illegal immigrants and federally fund abortions?

The Heritage Foundation reports that Obama's no-taxes pledges for families making $250,000 a year or less "lasted exactly 15 days," as he signed a bill hiking tobacco taxes 156 percent. The House passed a trillion-dollar energy tax, and Obama is prepared to impose punitive taxes on employers and individuals who don't procure health insurance. House leaders are also threatening a national value-added tax. Of course, the dirty little secret is that with all of Obama's budget-busting programs, he'll have to pass enormous taxes on everyone just to pay the increased interest on the national debt.

Meanwhile Heritage reports that Sen. Max Baucus' health care bill would still leave 25 million Americans without insurance (kind of defeats the stated purpose, no?) and would dramatically increase the government's role in health care by expanding Medicaid. Predictably, Democrats also just rejected a Republican amendment to require any health care bill to be published online before the Senate Finance Committee votes, with nary a protest from Mr. Transparency, President Obama. Obama has also been silent in the face of congressional Democrats blocking proposed amendments to bar federal funding for abortion.

Though Gloria Borger apparently can't grasp this, conservative opposition is grounded in principle and "tested" ideas -- not primarily partisanship -- and a duty to save the nation from efforts to transform it beyond recognition.