Are They All Democrats Now? 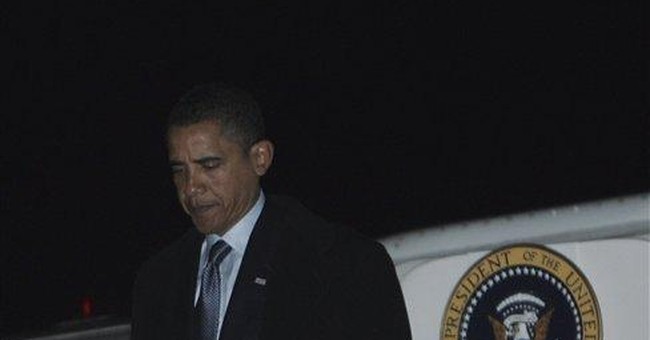 Barack Obama, itching to implement his gigantic stimulus package as soon as possible, is dangling the idea of combining his spending package with a tax cut in hopes of securing another kind of stimulus: Republican support for his package. Republicans should remember that when you polish manure, you still have manure.

Obama went to Capitol Hill Monday to promote his stimulus plan of between $675 billion and $775 billion. An estimated 40 percent of the package (between $270 billion and $310 billion) would consist of tax cuts.

Obama strategists say the proposed tax cuts are based on historical and empirical evidence of what works, not ideology. But despite his denials, Obama's intention to target the cuts to the "middle class" and exclude higher-income earners, whose stimulated activity has been shown to have the greatest economic impact, betrays his crippling bondage to ideology.

The lion's share of the relief would involve $500 tax cuts per individual or $1,000 per family for income earners and an equal amount in credits for those who qualify for the "earned-income" credit. But he would phase out those cuts and credits for households with incomes of $200,000 or more, which is inexplicable apart from ideology and class-warfare populism.

Also demonstrating his ideological motivations, Obama's plan envisions short-term relief via one-time tax credits or refunds rather than long-term changes to the tax code. As others have noted, long-term changes are far more effective at stimulating growth because producers and consumers look to the long term in making their investment, hiring and spending decisions.

Cash infusions from rebates or credits, especially with today's sluggish economy and people's uncertainty, could be ineffective because recipients might choose to save the money rather than spend it. That is what happened with the 2008 stimulus bill, as documented in a Heritage Foundation paper by Rea S. Hederman Jr., Stephen Keen and Brian M. Riedl. Only a small part of the rebate checks was spent, with large portions likely saved or used to pay down debt.

The John F. Kennedy, Ronald Reagan and George W. Bush tax cuts, by contrast, all involved reductions in the marginal income tax rates and all empirically stimulated economic growth by incentivizing producers. If Mr. Obama could remove his ideological blinders or shed his class-warfare mentality and truly be guided by "what works" (as he promises), he wouldn't even be thinking about targeted or short-term cuts.

But the other half of Obama's stimulus plan is even more troublesome and probative of Obama's allegiance to ideology rather than empirical and historical evidence. Contrary to most history and economics textbooks, Keynesian pump-priming stimulus packages do not lead to economic growth.

No central planning-type guru is as smart at allocating scarce resources as a free market pricing mechanism. As the Heritage analysts point out, when government spends $1 billion on highways, for example, hiring road builders and purchasing road materials, "It must first tax or borrow $1 billion from other sectors of the economy -- which would then lose a similar number of jobs. In other words, highway spending merely transfers jobs and income from one part of the economy to another."

Though liberals, such as Obama and the vast majority of history textbook authors, have a romantic attachment to FDR, the best evidence is that his New Deal did not end the Great Depression, but exacerbated it.

No one has done a better job in refuting liberal history revisionists and FDR apologists than Burton W. Folsom Jr. in "New Deal or Raw Deal? How FDR's Economic Legacy Has Damaged America."

Almost at the end of FDR's second term, the economy was getting worse, with unemployment at more than 20 percent. Folsom cites the words of FDR's treasury secretary and one-time confidant, Henry Morgenthau Jr., to make his case. These words should serve as a chilling reminder to all politicians even considering jumping on Obama's FDR big-spending bandwagon:

So when I read that Senate Republican leader Mitch McConnell has suggested that Obama's economic stimulus plan could receive "significant support" from Republicans if Democrats would just include Republicans in crafting the legislation, I have to ask, "Are they all Democrats now?"