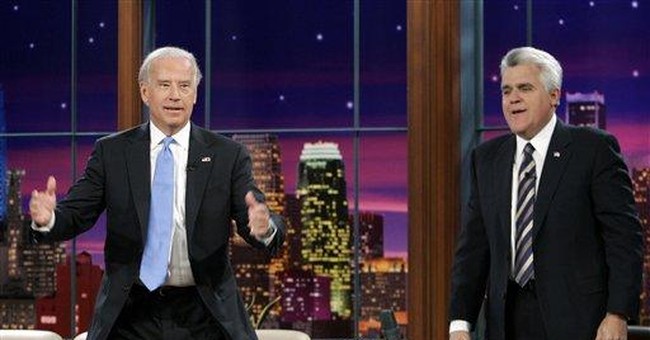 If Vice President-elect Joe Biden were slightly less enamored with his own voice he might not confuse himself so often on issues that matter so much, such as his views of presidential and vice presidential authority.

We've all heard about Biden's feud with Vice President Dick Cheney over Cheney's supposed view of executive authority relative to the other branches of government and Cheney's view of the vice president's role.

These happen to be two separate issues. Whether the president encroaches on the constitutional authority of the other branches is a different issue from whether the vice president oversteps his bounds inside the executive branch, or in his limited role in the legislative branch.

The problem is that Biden conflates these issues. He can't seem to keep straight whether he's exercised about an overreaching executive branch or an overreaching vice president mostly inside that branch.

My guess is that he confuses the two issues because, like other Democrats and liberals, he sees Cheney as the real villain in both cases. He blames Cheney, Bush's presumed puppet master, for Bush's alleged executive power grabs and he blames Cheney for overstepping his bounds as vice president.

Let's try to look at these issues separately, even though the players, in this case, overlap.

Reasonable people can disagree whether President Bush acted outside his scope of executive authority in various aspects of prosecuting the war on terror, such as in his handling of the NSA terrorist surveillance program. I believe history will soundly vindicate him, showing that he did consult and obtain the tacit approval of Congress on most of these matters. Moreover, the Constitution designates the president as commander in chief, never intending that wars be prosecuted by congressional committee.

How about Biden's claim that Cheney has arrogated too much power as VP?

Biden can be forgiven for misidentifying the correct Article -- Article II covers the executive branch. But is there validity in his assertion that Cheney has been the most dangerous VP?

In a recent interview with Larry King, Biden said Cheney believes the vice president is part of the legislative branch in order "to aggrandize the power of a unitary executive."

Excuse me, Joe, but what has Cheney ever said -- even in his responses to your ridiculous allegations -- to support your charge that he believes the VP should leverage his limited role in the legislative branch to expand the power of the executive branch?

How about Biden's reference to a "unitary executive"?

This is nothing new, but happens to be the recycling of a recurring, mythical Democrat talking point. During Judge Samuel Alito's Senate confirmation hearings Democrats accused Alito of supporting the notion of a "unitary executive," and that, if confirmed, he would vote to validate President Bush's alleged efforts to consolidate government authority in the executive branch.

If Judiciary Committee Democrats had been paying attention to Alito's testimony instead of posturing for the TV cameras, they might have learned that the idea of a unitary executive has nothing to do with the scope of the executive power vis-a-vis the other two branches. It means only that the president shall be in ultimate control of the executive branch.

Isn't this precisely what the Democrats have been demanding? Haven't they been saying that Vice President Cheney has had too much control over the executive branch and that the sole authority over that branch should reside with the president?

But in truth, their claim is absurd on its face, despite its mindless repetition by the liberal media. Cheney, by definition, could have no more authority than Bush delegated to him. As far as I'm aware, Democrats have cited no examples of President Bush delegating non-delegable powers to Cheney nor of Cheney exercising final authority over executive branch matters. In this administration, the buck always stopped with President Bush.

Democrats may not like it that Bush made Cheney a key policy adviser, but there's no constitutional violation there. Indeed, in the Larry King interview Biden said that in exchange for accepting the VP nomination he told Obama, "I want to be there when you make every critical decision you make."

So there you have it. Biden not only favors a unitary executive, he insists on having a critical advisory role in the Obama administration.

If you believe Biden and his fellow Democrats really object to expansive executive power in principle -- as opposed to just when Republicans occupy the White House -- just wait for the Obama regime.