What's in a Middle Name? 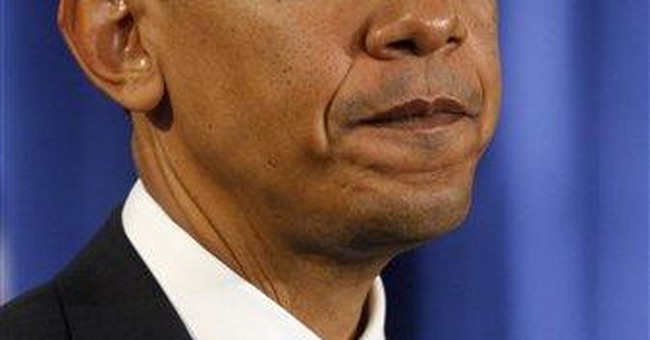 When I first heard that Barack Obama said he had decided to include his middle name, "Hussein," in his swearing-in ceremony, I wondered whether the satirical Web site ScrappleFace had tricked the mainstream media.

Surely, after Obama's acolytes scolded commentators for using Barack's Muslim-sounding middle name during the campaign, the president-elect himself wouldn't so quickly reverse course. But, in fact, he did.

In an exclusive interview with the Chicago Tribune, Obama said he'll use his full name in the ceremony like every other president.

I have no problem with that, as far as it goes. But Obama went further. He's not using his middle name simply because it's his middle name, but as part of a deliberate strategy to "reboot America's image" among the world's Muslims. He also plans to deliver a major speech in an Islamic capital, possibly within the first 100 days of his presidency.

Simple: because of President Bush's myriad sins against Muslims since 9/11. The Associated Press reports, as if imparting objective fact, "The U.S. image globally has taken a deep hit during President George W. Bush's two terms in office, primarily because of opposition to the U.S.-led invasion of Iraq, harsh interrogation of prisoners, the indefinite detention of terrorist suspects at Guantanamo Bay, Cuba, and mistreatment of inmates at the Abu Ghraib prison in Iraq."

What (SET ITAL) is (END ITAL) an objective fact is that Obama is communicating that very message. In elaborating, he says we must employ a new diplomacy, which would emphasize inclusiveness and tolerance, as well as an unflinching stand against terrorism. In other words, American diplomacy under President Bush has been intolerant and noninclusive.

This is just a rehashing of the tired Democratic talking point that Bush is a go-it-alone unilateralist who didn't build a broad international coalition to join our invasion against Iraq.

Democrats always have distorted the record on this issue. Bush tried tirelessly to talk our "Old Europe" allies into joining our coalition, but many declined because of their corrupt self-interests.

Democrats were aware of this and ignored it because Old Europe's recalcitrance provided a convenient cover for them to oppose the war they wanted to oppose but were forced to support because of overwhelming public opinion. Just as with their false charge that Bush didn't try a bipartisan approach with them on domestic policy, what Democrats really meant is that Bush pursued policies with which (SET ITAL) they (END ITAL) couldn't agree -- and thus he was unilateralist, intolerant and partisan.

To be more specific, what Democrats have been saying and Obama is now repeating is that President Bush has alienated America from the Muslim world by attacking Iraq without justification. They obviously believe Muslims have a right to be outraged at us and we need to make amends and show them we are decent people.

I don't care how many mind-numbed e-mail responses this generates, but we did have ample justification for invading Iraq, even apart from the WMD question, including Saddam's willful violation of 17 U.N. resolutions and postwar treaties.

But what is most troubling about Obama's plan to "reboot" our image in the Muslim world is its unspoken premise that terrorism is fueled by our mistreatment of Muslims and that if we'd just be kinder to the Muslim world, terrorism would melt away. If you're skeptical, just research Obama's statements about the root causes of terrorism, which to him include poverty -- the left's old economic determinism template. I wonder whether he plans to "spread the wealth" with them, as well. I'm sure a few extra mil would have deterred Osama.

But as I recall, America didn't start this war against Islamic terrorists, who had been waging war against us well before 9/11. We are not the ones whose places of worship and schools indoctrinate our children to hate nonbelievers. We're not the ones who treat our women like chattel, engage in honor killings of family members, target innocent civilians, or dance in the streets when innocents are murdered.

Obviously, it doesn't fit Obama's palette of predispositions to recognize that America was not wrong in liberating Iraq -- something the self-styled compassionate left should be ashamed to have opposed on humanitarian reasons alone; that we do not torture enemy detainees (Abu Ghraib was not the rule, but an aberration); and that we do the opposite of mistreating prisoners at Gitmo.

It also may not occur to Obama that in any negotiations -- his messiahship notwithstanding -- it takes two to make a deal. But he may learn soon enough the hard way if Britain persists in balking on his request that they send more troops to Afghanistan and Iran keeps dissing him.

If Obama truly intends to advocate (SET ITAL) for (END ITAL) America instead of reflexively blaming us first, he's in store for a quick comeuppance.