Bipartisanship: For the Common Good? 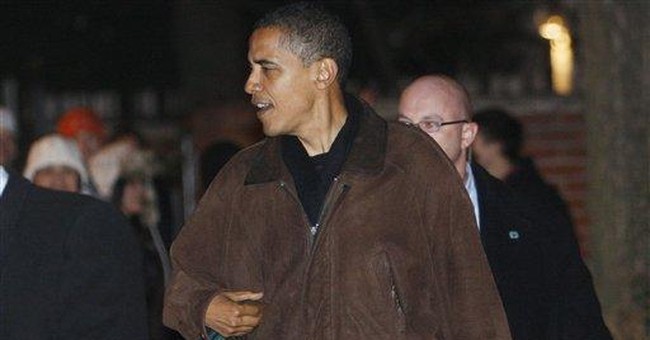 Many say that now that Barack Obama has been elected, we should all work together for the common good. That sounds wonderful until you realize that we don't all agree on what is the common good.

Notice I don't take the position that Republicans should refuse to cooperate with Mr. Obama because Democrats have been indescribably partisan, cruel and unfair to President Bush for the past eight years. Those are certainly grounds to call them hypocrites, but we must always put the best interests of the nation above petty partisanship -- obviously.

So we must ask: Would it be in the best interest of the nation for Republicans to work with Barack Obama?

The only sensible answer is: It depends on what policies Obama pursues. As much as people want to believe that getting along is the highest good, there are many more important things.

If Democrats were being honest, they would agree with that statement. Otherwise, they owe us an explanation as to why they opposed President Bush at every turn. Could it be they think their ideas on Iraq, the war on terror, education, stem cell research, judges, the environment, immigration and the rest are more important to them than simply getting along? I thought so.

And while certain conservative "intellectuals" have anesthetized or deluded themselves with feel-good platitudes, I daresay that camaraderie in furtherance of policies that could permanently erode our liberties is hardly for the common good.

Yet with Obama's rash of Clinton-era appointments, these conservative elites are already feeling vindicated in their stated hope that Obama is not a leftist who would govern in accordance with his decidedly liberal record.

But as I anticipate the Obama presidency, I'm -- surprise, surprise -- far less sanguine. To the extent that Obama charts a course toward preserving our liberties and prosperity, I'll be more than happy to support him. To the extent that he does not, I have a duty to oppose him, for which I do not apologize.

Based on his campaign and everything I've been able to glean from his available records, I believe Obama would:

--Shut down Guantanamo Bay and otherwise make life much easier for our terrorist enemies and others who want to destroy the United States and Israel.

--Fill any Supreme Court and lower court vacancies with liberal activist judges whose decisions would further imperil our constitutional integrity.

--Promote a culture that, notwithstanding the embarrassing denials of such previously stalwart life proponents as Doug Kmiec, would be hostile to the lives of the innocent unborn.

--Initiate a stimulus package that would equal or exceed the $700 billion government "bailout" package, the sheer magnitude of which is still sending shock waves into America's free-market soul. This, despite the liberals' castigation of President Bush for eight years for fiscal irresponsibility.

--Further open the floodgates to illegal immigration, with the purpose of expanding another Democratic constituency and with utter disregard for the rule of law and whether immigrants assimilate into the unique American culture or learn the English language and American civics.

--Seek to implement endless Draconian measures to satisfy the global warming cult, whose blind faith to their secular religion blinds them -- ironically -- to real science and whose ideology makes them indifferent, at best, to the disastrous economic and freedom-zapping consequences that would ensue.

--Pour even more federal money into and demand more federal control over education, consistent with the liberal policy goals of the National Education Association, which are demonstrably aimed at indoctrination, at the expense of academic excellence.

--Continue to oppose school vouchers, to the disproportionate detriment of inner-city minority children.

--Withdraw our troops from Iraq, even against the advice of generals on the ground, jeopardizing our almost consummated victory, the independence and freedom of the Iraqi people, and possibly rendering vain the noble deaths there of American and Iraqi soldiers.

--Impose some form of nationalized health care, which would inevitably destroy, despite its many problems, the best system of health care in the world.

--Implement a cookie-cutter Iraq-type surge in Afghanistan when -- as former Defense Secretary Donald Rumsfeld's op-ed in The New York Times makes clear -- such a course could embroil us in a devastating quagmire.

We live in very dangerous times. Many of these policies would be very difficult, if not impossible, to reverse and could forever change America.

I ask those of you who place such a high priority on bipartisanship and collegiality: If Obama pursues the course outlined here, should we help him to be "successful" in those pursuits?