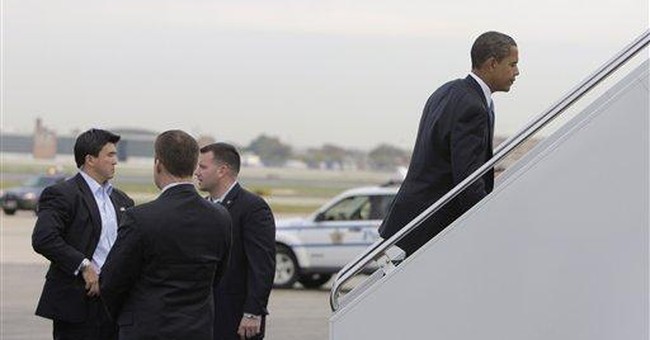 There's little doubt America is a center-right nation, which is why Barack Obama denies and conceals his liberalism and packages himself as a harbinger of hope and change.

Obama's policies represent change all right: change from almost everything our Founding Fathers considered sacred and vital to the preservation of individual liberty in America.

He also offers hope: hope for those who share his shame in what America has become, what it stands for, and what makes it unique in world history. Hope that an unenlightened America can be remade by this "transformational" man in an image pleasing to George Soros, the Hollywood elite, MoveOn.org, the Daily Kos and Michael Moore.

But if labels bother you, let's look at Obama's alliances and policies and let them speak for themselves.

If you are so intoxicated with "hope" that you believe Obama wasn't aware of and not in sync with the Rev. Wright's militantly racist and anti-American views or his black liberation theology, then it's probably too much to ask for you to be objective about his links to Bill Ayers and ACORN.

Instead of restating Ayers' despicable actions and beliefs, I just want to know whether Obama believes Ayers has been rehabilitated, which he suggests when he touts him as "a professor of education." Though Obama says he was just 8 years old during Ayers' Pentagon-bombing days, he doesn't mention that he was an adult when he served on boards with Ayers, launched his state Senate campaign at his home, and gave a glowing jacket endorsement for Ayers' book. Nor does he tell you that just a few short years ago, Ayers stomped on the American flag and reaffirmed his pride in his criminal acts.

Concerning ACORN, what do you suppose the mainstream media would do to John McCain if an organization he represented, whose members he trained and who he promised would play a pivotal role in formulating his presidential policy agenda, were caught red-handed trying systematically to subvert the election process throughout America?

As for Obama's leftist policy positions and attitudes, how do you think the following would sit with most Americans?

--His enabling of infanticide by arguing and voting against the Induced Birth Infant Liability Act in the Illinois Senate, which would have protected babies who survive failed abortions.

--His support of open borders and driver's licenses for illegal immigrants.

--His casual endorsement of Marxist redistribution of wealth.

--His plan to let the Bush tax cuts expire, resulting in a massive tax increase for tens of millions, and his tax credits to tens of millions more not paying income taxes, all while fibbing that he's going to cut income taxes for 95 percent of Americans.

--His plans to increase spending an estimated $1.3 trillion, not to mention the obscene dollars he would send overseas with the Global Poverty Act.

--His condemnation of our liberation of Iraq from the brutal dictator Saddam Hussein in furtherance of our national security interests yet promising military interventions for humanitarian reasons where we clearly have no national interests at stake.

--His opposition to the surge in Iraq and his plan to withdraw and jeopardize our imminent victory and the region's stability.

--His reckless plan to embroil us in a quagmire in Afghanistan and agitate Pakistan, our important ally in the war on terror.

--His naive commitment to negotiate with tyrants without preconditions.

--His inclination toward unilateral nuclear disarmament.

--His constant references to America's former greatness and his promises to restore our position of respectfulness in the world, betraying his full agreement that we've earned this supposed international disrespect.

--His forfeiture of American sovereignty to international bodies in obeisance to the pantheistic religion of global warming.

--His Kerryesque schizophrenia on guns and the Second Amendment.

--His derision of small-town Americans as bitter clingers.

--His thuggish approach toward those who dare to oppose him, such as Joe the Plumber, or anyone in St. Louis, whose criticism could have subjected them to criminal prosecution.

--His outright mocking of the Bible while adamantly insisting he's a strong Christian: "Which passages of Scripture should guide our public policy? Should we go with Leviticus, which suggests slavery is OK and that eating shellfish is abomination? How about Deuteronomy, which suggests stoning your child if he strays from the faith? Or should we just stick to the Sermon on the Mount -- a passage that is so radical that it's doubtful that our own Defense Department would survive its application?"

Truthfully, I'm barely getting started. But can you honestly tell me Obama would have a prayer of being elected if he were honest about his agenda and allies and if the media, which share his radical views, weren't in the tank for him?