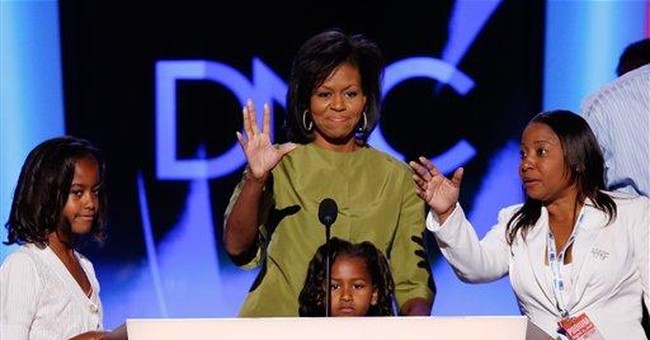 In one sense, it's incomprehensible that Barack Obama would forgo an opportunity to reunite his party by picking Hillary Clinton as his running mate. But in his place, wouldn't you be willing to sacrifice a little if it guaranteed you'd never have to view and smell Bill Clinton's sock feet propped up on the Oval Office desk?

But whatever will this messianic emissary of change do to unite his party? That is a legitimate question, is it not, since unity, harmony, love and bliss have been Obama's main campaign themes since his entry onto the presidential campaign stage?

How, inquiring minds wonder, can Obama join us all together -- bitter clingers and all -- in one big communal bond of sentimental good will if he can't even inspire unity in his own party?

That's unfair, you say? It's not his fault? It's those grudge-holding Clintons and their die-hard supporters who won't bury the hatchet?

Oh? I thought it was George W. Bush's fault that the countries of Old Europe wouldn't support the American efforts against Iraq. I thought it was Dubya's fault -- that evil, unilateralist, go-it-alone cowboy -- that the United Nations wouldn't do the right thing and enforce its own resolutions that Saddam Hussein had violated at will.

Democrats told us that had they been in charge, the world would have melted in their diplomatic hands. It was Dubya's fault the world wouldn't get on board. Shame on Dubya for not placing "unity" and "bilateralism" -- you know, getting along for the sake of getting along -- ahead of national interests.

Democrats also railed against Bush for failing in his promise to bring the country together, to usher in a spirit of conviviality across party lines, as he had done as Texas governor.

Never mind that he did reach out ad nauseam to Democrats, even courting the ideologically hostile Ted Kennedy. Never mind that Democrats and their fellow leftist Bush Derangement Syndrome enablers were engulfed in blue flames of unquenchable hatred for George Bush and depicted him daily as "Hitler" and "the enemy." No, it was all George Bush's fault that the country didn't come together. It was his fault they couldn't forgive him for sins he hadn’t committed.

Shouldn't these people who held Bush to the impossible standard of winning the favor of terrorists, recalcitrant nations and an unappeasably hostile opposition party be held to the much easier standard of unifying just their own party?

Yet what do we see as this splendiferous Democratic convention week begins in Denver? What news stories are sucking the oxygen out of every crevice in the Pepsi Center?

Outside, we see the irrepressible anger of anti-war protestors surrounding the site. And inside, we see in some 25 percent of the jilted Clinton delegates the fury of a woman scorned -- literally.

Clinton primary supporter Debra Bartoshevich, featured in a McCain ad, doubts Obama has the "experience and judgment to be president." "A lot of Democrats," she says, "will vote McCain." And she's hardly an isolated case.

One group of disgruntled Clinton supporters calls themselves "Party Unity My Ass" and hisses mockingly at Obama on its Web site, "We are the ones no one was expecting." Other disillusioned feminist Clintonoids, firmly believing their candidate was a victim of sexism, succeeded in inserting language into the Democratic Party platform condemning misogyny. How heartwarming.

Then there's the latest USA Today/Gallup Poll, which shows that only 47 percent of the Clinton troops said they'd vote for Obama while 23 percent were uncommitted. Sorry to flag the obvious, but this means that more than half the Clinton supporters have yet to join Obama.

Trust me, if there were a spirit of unity in this party, the Obama camp wouldn't be preoccupied with proving it. Supportive media outlets, such as The New York Times, wouldn't be declaiming, "The biggest challenge for Democrats will be reuniting a party strained by the months-long primary battle between Mr. Obama and Senator Hillary Rodham Clinton." And Obama supporters wouldn't be lashing out at Hillary holdouts as "bitter-enders" and comparing them to "Japanese soldiers in the South Pacific still fighting after the war is over."

Obama made his own bed with his unity boasts. Of course, he also told us he would bring a fresh and less divisive and mean-spirited approach to politics before proceeding to skewer John McCain with such loving caricatures as, "Talking tough and acting dumb is not a way to keep you safe and secure."

But fear not. Barack's still got that change thing going for him. Biden, anyone?