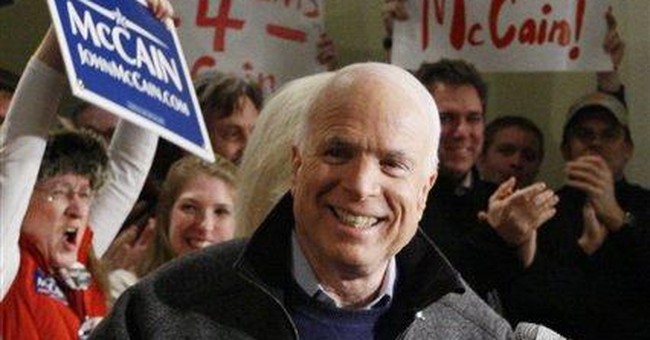 Many have discussed whether certain candidates have "fire in the belly." What I'm wondering is whether, at this point in our national history, conservatives in general have fire in their bellies.

Given Gov. Mike Huckabee's remarkable performance so far in the GOP presidential contest in the name of conservatism, and especially after seeing his interview on the "Tonight Show," I question how brightly that flame is flickering.

When Ronald Reagan was running for president in 1980, conservatives had more reasons to be discontent. We had been conditioned to believe that inviolable economic principles dictated that there was a necessary trade-off between unemployment and inflation: You couldn't decrease one without increasing the other.

The Carter years were characterized by full-blown pessimism. Interest rates, inflation and unemployment all soared. Nuclear-freeze liberals were hell-bent on our unilateral disarmament. The ravages of the Warren Court were in full bloom, and the Republican Party was mired in the taint of the Watergate scandals.

Ronald Reagan came along and offered hope. He refused to acquiesce to the defeatism of the period. He refused to accept that half the world would remain under the tyrannical hand of global communism. He revived the latent conservatism in the hearts of the "silent majority" by proclaiming and proving that neither America nor American ideals were dead; they only needed permission to breathe again.

Reagan both campaigned and governed on the power of ideas. Since the Reagan tax cuts first kicked in, other than a few relatively short hiccups, we've enjoyed unprecedented economic growth without substantial inflation. That growth, coupled with the build-up of our military, laid the foundation for the inevitable demise of the Soviet Empire. In just a short decade, America and the world had turned around.

I fear our successes, which are largely due to conservative policies, have led to our complacency. When things are going well, it is easy to take for granted or forget the principles that made it all possible.

Indeed, it seems that only nerdy disciples of German economist Friedrich Hayek remember there is a closely tied relationship between economic and political liberties. Far too many people believe we can continue to piggyback on our legacy of freedom, which is made possible by limited government no matter how big and intrusive government becomes. They believe we can undermine, with impunity, the constitutional pillars that guaranty our liberties, apparently assuming our glorious experiment in constitutional governance was an accident of geography or demographics rather than ideas. They believe we will always be the world's lone superpower irrespective of whether we commit our spirit and resources to that effort. It's just manifest destiny -- or magic. Consider, for example, those who interpret our prevention of further major terrorist attacks on our soil since 9/11 as proof the threat has diminished, or perhaps was overblown from the beginning.

We expect liberals to believe: We can punish the producers in this nation without reducing overall output and hurting all economic groups; we can socialize health care without destroying its quality, quantity and affordability; we can assault our traditional values and cultural institutions without eroding the nation's character; unbridled, illegal immigration without assimilation will lead to multicultural Nirvana; and we will be secure at home if we'll just be nicer to foreign nations and more sensitive to the terrorists' concerns.

But what about conservatives? Do we also need a reminder that free nations are the exception in world history and that our liberty was purchased with the greatest sacrifices and will ultimately disappear without a rededication to our founding principles?

I would assume conservatives agree that America's best hope for continued greatness lies in its foundational ideals and that conservatism offers the best path for the preservation of those ideals.

Their preservation does not depend on everyone holding hands and getting along, bipartisanship, Senate collegiality, a better understanding of the evil little mind of Mahmoud Ahmadinejad, or blinding ourselves to other evils that exist in the world.

That's why it troubles me when the ostensibly conservative Mike Huckabee tells Jay Leno he wants us to abandon "horizontal politics. Everything in this country is not left, right, liberal, conservative, Democrat, Republican. I think the country is looking for somebody who is vertical, who is thinking, 'Let's take America up and not down.'"

It's perfectly fine for Mike Huckabee to make such pronouncements. I just hope conservatives understand that what takes America "up" are conservative principles -- and that it will always be necessary to fight for those principles against those who don't fully understand them or who are committed to their defeat.

Even we conservatives need to remind ourselves, from time to time, what brought us to the dance.