Sen. Leahy and the Fair-Weather Constitutionalists 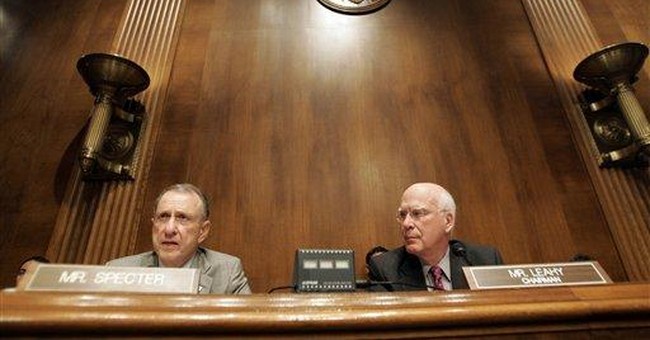 Sen. Patrick Leahy has mounted his high horse again and is on the warpath against all things Bush and all things Republican. It might be instructive to examine certain statements in his tirade disguised as an interview with Politico.

Leahy said, "The president, with others, has stated in effect that he is a law unto himself and the president can overrule the law, the courts and congressional actions. We have seen this with regards to torture, signing statements and the president determining who will be prosecuted."

For Leahy this is nothing new. Like a spoiled kid who can't always have his way, he has been blowing things out of proportion for some time now -- turning every political frustration into a supposed constitutional crisis. In early 2006, he betrayed his true colors when he said the constitutional "checks and balances that have served to constrain abuses of power for more than two centuries in this country" are at risk when Republicans control the legislative and executive branches.

To Leahy it was a constitutional crisis for voters to elect Republicans to power in the executive and legislative branches. But what's his excuse now, with Democrats in control of the legislative branch? Instead of admitting he has policy differences with President Bush, he says Bush is abusing the Constitution.

I'd like Leahy to cite just one case where President Bush has said that he can overrule the law, the courts or congressional actions. Of course Bush believes the executive branch doesn't have to bend over in rank subordination to the legislative branch, and the Constitution happens to be on Bush's side on this matter. If Bush were the autocratic bully Leahy and others say he is, would he not have wielded the veto pen a little more often?

When Leahy talks about Bush being "a law unto himself," he's usually talking about the NSA surveillance program. But with this program, Bush doesn't claim he can violate or "overrule" the law. He just has a different view of the law and his inherent constitutional authority in this area. He takes the position that the law permits the government to engage in warrantless wiretaps of conversations of suspected terrorists when one party to the conversation is not in the United States.

But Leahy has been playing fast and loose with the facts and law on the NSA surveillance program almost since its inception. Remember when he (and many other Democrats) intentionally mischaracterized the program as domestic spying? Leahy went as far as to say, preposterously, "My concern is for peaceful Quakers who are being spied upon and other law-abiding Americans and babies and nuns who are placed on terrorist watch lists."

Why in the world, other than to damage Bush at the expense of the national interest, would Leahy aid and comfort the Al Qaeda propaganda machine by saying Bush is spying on little old ladies in the United States instead of suspected international terrorists? Leahy certainly isn't doing it to vindicate the Constitution. It's just a wild guess, but I doubt that many Quakers are on the average Jihadist's Rolodex.

Leahy and other Democrats conveniently cite the Constitution on the NSA issue for the same reason they accuse Bush of authorizing torture when Bush has expressly denied it and when he's made it clear that torture is not the administration's policy. Their statements are designed to damage the Bush administration.

Let's admit Bush and Republicans favor tougher interrogation techniques than do Democrats. How could it be otherwise, given the Democrats' knee-jerk propensity to sympathize with the plight of the enemy combatant, their tendency to take the Guantanomo terrorist detainees' word over the Bush administration on how the detainees are being treated, and their reckless desire to afford full-blown constitutional rights to such detainees?

On that point, seriously, how can Leahy and friends, with straight faces, contend it is the Constitution they are vindicating when they want it to apply with full force to enemy combatants? How can anyone take these people seriously about their allegiance to constitutional principles when they are the ones who champion twisting the Constitution to achieve any policy end -- like the promotion of abortion rights?

Yet Leahy had the audacity to claim, in the Politico interview, that the Roberts Supreme Court, in rolling back some of the liberal activist decisions of the Court, has become "an arm of the Republican Party."

Black is white and white is black. Just repeat a distortion often enough and it moves from laughable to possibly believable to conventional wisdom. That's Leahy's and the Democrats' m.o. They are constitutionalists, all right, as long as being or saying so serves their political interests.