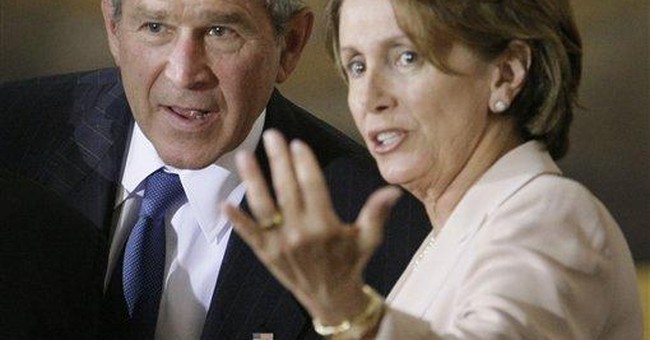 Very good news is coming out of Iraq. Not surprisingly, this hasnt caused a change of heart among the Democratic leadership. It hasn't even given them pause. One wonders if they are capable of hearing such news anymore.

The Times Online reports that Al Qaeda is facing rebellion from within its ranks. Fed up with being part of a group that cuts off a persons face with piano wire to teach others a lesson, dozens of low-level members of Al Qaeda are daring to become informants for the U.S. military in a hostile Baghdad neighborhood.

Some of these junior Al Qaeda members are said to be repulsed by the gratuitous, barbaric violence. One said, I am sick of it and I hate them, and I am done.

The good news doesn't stop here. Al Qaeda is not only facing internal dissension, but evidence is also emerging that other ethnic forces formerly friendly to Al Qaeda are changing their tune. Iraqi locals are denying Al Qaeda the sanctuary they need to operate. Lt. Col Stephen Michael, commander of a 700-troop battalion in Doura, says, Al Qaedas days are numbered, and right now he is scrambling.

This news, says the Times, comes out of Doura. But it is part of a wider trend that has started in other Al Qaeda hotspots across the country and in which Sunni insurgent groups and tribal sheikhs have stood together with the coalition against the extremist movement.

Along the same lines, The Washington Times reports that U.S. forces have brokered an agreement between Sunni and Shiite tribal leaders in Taji, Iraq, to join forces against Al Qaeda and other extremists, which represents an extension of a policy already implemented in Anbar province that has transformed the security situation there.

This isn't some flimsy handshake deal. Tribal leaders agreed to use members of more than 25 local tribes to protect the area around Taji from Sunni and Shiite extremists. It's also significant that tribal forces approached U.S. forces to initiate this agreement.

Al Qaedas inhumanity is not the only reason things are beginning to change in Iraq. The reports clearly indicate that the increased number of U.S. forces in Doura has made the locals feel it's less dangerous for them to turn toward us. These reports are direct confirmation that the surge strategy is working.

The Washington Times also reports -- surely much to the chagrin of war naysayers who have gloated that we have been greeted not as liberators but occupiers -- that U.S. soldiers walking through Sunni villages have been greeted warmly, with locals shaking the soldiers' hands and kissing their cheeks. Just a month ago, according to Sgt. Richard Fisk, every single one of these people was shooting at us.

Has any of this good news coming out of Iraq prompted Democrats to rethink their opposition to victory?

A brief survey of recent headlines reveals quite the opposite. Sunday, Senate Majority Leader Harry Reid said he would press forward on legislation to pull U.S. troops out of Iraq, despite the Democrat's failed efforts last week to pass such a bill. He also said Republicans who voted against withdrawal of our troops were engaged in partisan gamesmanship. If that isn't a textbook case of psychological projection, Ive never seen one.

Meanwhile, Senator Russ Feingold told NBCs Tim Russert that he wants Congress to censure President Bush for his management of the Iraq War and his assault on the Constitution. While Reid didn't readily warm to the idea of a censure, he did say that the president already has the mark of the American people that hes the worst president weve ever had. Hows that for rising above partisanship and supporting your commander in chief during wartime?

Elsewhere, that great patriot from San Francisco, House Speaker Nancy Pelosi, derided President Bushs call for congressional Democrats to rise above partisanship. Like Reid, Pelosi said the American people have lost faith in Bush and she will continue to cause Congress to vote to end this war every chance she gets.

Speaking of partisanship, news reports around the web demonstrate that while the Bush administration and our armed forces are doing everything they can to accomplish serious, non-partisan business in Iraq in furtherance of the nonpartisan goal of promoting our national security, Democratic leaders are bogging down the administration in frivolous investigations over matters that aren't even arguably illegal.

In other news, Democratic presidential candidates are traveling the country trying to outdo each other in the nonpartisan activity of pandering to illegal immigrants for their votes (Obama has gone so far as to court La Raza). Other party leaders are trying to develop strategies to unburden the party of its image as the party of abortion. Of course, they're not doing anything to unburden themselves of the party's moral failure on it.

That concludes our report.