I Respectfully Disagree with Peggy 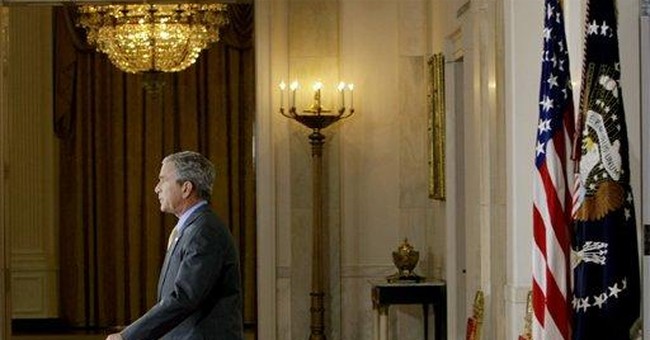 While I've had strong policy disagreements with President Bush, I am unafraid to say I am still grateful he is commander in chief at a time when more and more people are losing sight of the big picture in the global war against Islamist terrorists.

It is difficult even for the most hawkish not to be dispirited by the unrelenting negativity against the war by Democrats and the mainstream media, especially since it has gone on longer than we'd hoped.

It's important that those who have realistically assessed the almost-inevitably devastating consequences of our precipitous withdrawal from Iraq resist the seductive pressure to jeopardize our long-term security in exchange for the quick-fix withdrawal option.

This is why it's especially disappointing that some previously war-supporting conservatives have succumbed to the temptation to fold in the face of the public's war fatigue. I assume that such fatigue is behind the revulsion columnist Peggy Noonan expressed for President Bush in her July 13 column.

I hate to disagree with Peggy, who I greatly admire, but given her long-standing and well-earned position of influence on the right, I think it's important to address some of her observations.

I may be wrong, but I read her column as reflecting a growing dissatisfaction with the president's war policies, and an even greater visceral distaste for his personality and demeanor. Peggy wrote that on watching the president's July 12 news conference she found herself "thinking about what it is about him, real or perceived, that makes people who used to smile at the mention of his name now grit their teeth."

She said she was "not referring to what used to be called Bush Derangement Syndrome. That phrase suggested that to passionately dislike the president was to be somewhat unhinged. No one thinks that anymore." She stated that before the conference she had received an e-mail "from as rock-ribbed a Republican as you can find," who "said she'd had it [with Bush]. I don't believe a word that comes out of his mouth.'"

Noonan expressed disdain for "the president's seemingly effortless high spirits" during these sobering times and given his "lack of success" on domestic policy and Iraq. "He doesn't seem to be suffering, which is jarring."

She complained that Bush, by claiming to be idealistic and principled, is implying his opponents are not. She described as "extremely irritating," "unnatural" and "weird" that Bush is romantic and unrealistic, while "it is the people who are forced to be cool-eyed and realistic." She suggests that frustrated Americans would like to fire Bush right now, but they can't, "so they're waiting it out" and gritting their teeth.

Since I'm running out of space with the long quotes, let me just state my disagreements summarily and respectfully.

Bush Derangement Syndrome is not something that "used to" exist. It is alive and well -- and apparently growing. While Peggy says that no one thinks anymore that those afflicted with the syndrome are unhinged. I do, as do many others, and I deeply lament that Peggy is giving cover to the vicious, indefensible assaults against Bush from the left since 2000.

Likewise, I deeply lament that she cites approvingly, the e-mailer for the perception that Bush doesn't tell the truth. Of all the unconscionable lies the left has disseminated, this one is among the worst, and I can't believe Peggy is lending her name to it even if by implication. If some conservatives have gritted their teeth, it hasn't been over the Iraq war (except for the faint of heart), but mostly immigration and spending. And it's certainly not that they have bought into the Goebbelsesque propaganda that "Bush lied, people died."

As for Bush's unjustified "high spirits" given his "lack of success" and his "jarring" refusal to wear his suffering on his sleeve, I reject that he's lacked success on Iraq, unless we gauge success purely by public approval in the short term. Also, isn't it extraordinarily presumptuous for us to assume Bush is not feeling the pain and anguish from the loss of American lives occasioned by his exceedingly difficult decisions?

As for Bush's self-proclaimed idealism, I believe he is merely referring to his optimism concerning the human yearning for freedom. And he is defending his actions as principled, not boastfully or as an indictment of his opponents -- but in response to attacks that he's ignoring the polls.

Contrary to Peggy's contention, I believe that as compared to the fair-weather public, President Bush is demonstrating commendable realism on the war and exceptional courage to pursue the long-term best interests of this nation, despite the bipartisan abuse he continues to endure.

That the United States has, during these times, an unflappable leader with a healthy blend of idealism, realism, principle and character is a cause not for gritting our teeth, but thanksgiving.

We Have Another School Board Hot Mic Fiasco. Want to Guess What Was Said? Hint: It's Full-Blown Woke.
Townhall
'If you don't believe that there's white privilege please don't teach': Here's another white woman singing about white privilege on TikTok
Twitchy
Peter Doocy Asks Biden About Those $2000/Checks He Promised 'Immediately,' It Doesn't Go Well
Redstate
6 Reasons to Oppose the Orwellian 'Equality Act'
PJ Media