Muddle-headed Politicians and the Terrorist Threat 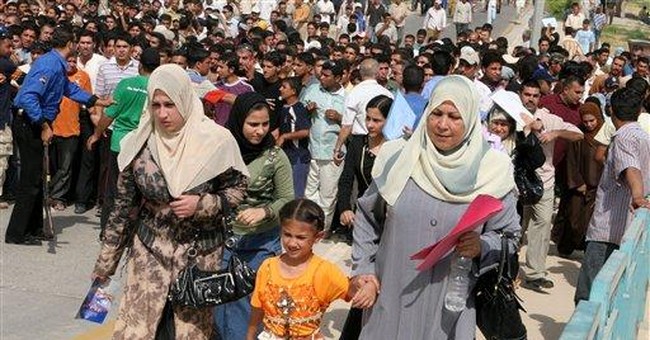 Have you seen the latest reports and photographs of Al Qaeda's brutality and savagery in Iraq? In view of these, how can any reasonable person still maintain our own policies and actions are making them do it?

How can so many be blind or indifferent to the ruthlessness, tenacity and implacability of our jihadist enemy? How can they so easily downplay or ignore this global threat as if its existence is purely a product of our perception, which we can wish away with positive thinking, legislate away or make disappear by withdrawing from Iraq?

Ending our involvement in Iraq will not end the Iraq war as Democrats glibly imply, nor our involvement in the global war. But it will surely increase the violence and death in Iraq and the likelihood of victory for our terrorist enemies.

What kind of deceptive force possesses American and Western European liberals to make obscene claims of moral equivalence between the consistent acts of barbarism unquestionably committed by our enemies and the rare cases of alleged misconduct by our troops in Iraq or Guantanamo?

Better yet, what makes them look the other way or even apologize for the terrorists' actions -- "our policies caused them to do it" -- but rush to embrace the worst imaginable, mostly untrue allegations against our troops, our commanders and the Bush administration?

Don't accuse me of hyperbole unless you have a sufficient explanation for the left's utter lack of outrage over the horror perpetrated by the enemy in Iraq on a daily basis. Don't accuse me of distortion in saying you are willing to believe the worst about our soldiers unless you can explain why your first instinct is to believe the enemy's propaganda instead of our own people in Gitmo and elsewhere.

Don't say I'm misrepresenting the facts unless you have a satisfactory answer for the liberal media's refusal to report the good news from Iraq, but more importantly, their calculated free pass for terrorists and their unimaginable atrocities.

Are liberals so consumed by Bush derangement syndrome (BDS) that they've lost all perspective? Is their contempt so intense that they don't have any passion left for the forces of good against those of evil in this worldwide struggle? Are they so invested in their opposition that they refuse even to believe the terrorists' own words about their global designs?

To the extent their vision isn't marred by BDS I have to conclude their worldview doesn't permit them the clarity of moral vision necessary to comprehend the true nature of our enemy and that it cannot be reasoned with, negotiated with, mollified or deterred short of the use of force.

Despite their unconvincing protests to the contrary, it's painfully obvious liberals just don't believe in our cause in Iraq. Their behavior cannot be explained any other way. They're clearly rooting against, indeed trying to preempt the surge and otherwise thwart our mission.

If they wanted the surge to work, they wouldn't be declaring it a failure prior to the date Commander David Petraeus set for fairly evaluating our progress -- especially considering that many signs are pointing to the surge's success.

Reports coming out of Iraq indicate that our new strategy of rooting out terrorists and holding the areas is working. Evidence is accumulating that even if our homegrown liberals aren't, the Iraqi people are increasingly turning against Al Qaeda, largely because of their brutality. Sectarian violence, for now, is declining.

In an interview with columnist Ralph Peters, General Petraeus said, "If I could only have one [thing] at this point in Iraq, it would be more time." There are no shortcuts, he said. "It's a test of wills, demanding patience, determination and stamina from all involved."

Democrats and other liberals are unwilling to give it time -- that's nothing new, and no surprise. What is profoundly disappointing is the growing number of Republican politicians who, apparently corrupted by beltway hubris and toxicity, have abandoned the mission just when it looks like we have captured momentum.

These tired elephants appear more concerned with achieving some abstract bipartisan consensus -- as if politicians rubbing each others' backs is a higher moral aspiration than protecting the nation -- than in dealing with the concrete threat of an enemy trying to subjugate and kill us. It's disgraceful.

If they are so hell-bent on affecting a premature withdrawal, they should consider affecting their own withdrawal from Congress. Perhaps it's time for these foreign policy geniuses who think they can tame terrorists and achieve world peace with a wave of their magical legislative wands to step aside and make way for ordinary people who are capable of seeing beyond their own interests and confronting the evil that threatens our future.