The Left's Stranglehold on the Donkey 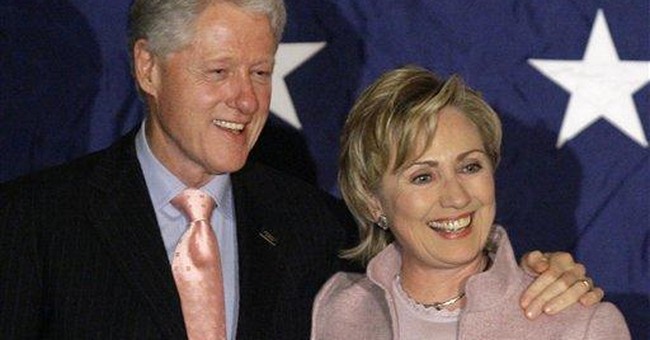 Putting aside the dismal state of the conservative movement's influence on the current political class, including far too many Republicans, and what must be done to remedy it, one hopes that so-called swing voters are paying attention to the leftward lunging of all Democratic presidential candidates.

If -- and this is a big "if" -- Republicans eventually get their house in order on immigration and other major issues, they might be able to capitalize on the extreme left's stranglehold on the Democratic Party.

The far left is not only calling the shots, it is boasting about it, and at this stage, the competing candidates don't dare step out of line, much less fight back against the extremists. For now, they are just doing as they are told.

If things had gone as Hillary Clinton had planned: dispensing with the annoying primary competition and proceeding to the crowning, she might already be pretending to be a reasonable centrist again. But curse Obama and John Edwards, who are forcing her to be honest to her true leftist convictions.

We witnessed the left's cockiness and the candidates' pathetic sycophancy toward it during this week's "Take Back America" conference in Washington, D.C. The event is being sponsored by Campaign for America's Future, a far-left group devoted to the recapturing of America for unmitigated liberalism.

Though Hillary has done a 180 on Iraq since she fell flat at this conference last year, she wasn't able to win over the audience this year by nodding to the troops even as she dissed the war effort and pledged "to end the war in Iraq and finally bring home the troops."

National Review Online's Byron York reports that while receiving kudos for indicting the Bush administration for its "stunning record of secrecy and corruption," Hillary was roundly booed when she said, "The American military has done its job" and "the American military has succeeded." She dare not praise the military in earshot of the "we oppose the war but support the troops" left.

Robert Borosage, the conference organizer, spoke the obvious, "We really do believe we're driving the debate right now. It's a historic turn, a repudiation from the last 25 years of conservative dominance."

The bullying leftists will not tolerate disobedience and will not quickly forgive defectors. Their power is far from limited to this week's conference. They're in full control now at Democratic Central. Their dominance can be seen in their success in intimidating the major Democratic candidates: Edwards, Obama, Clinton, Christopher Dodd and Bill Richardson -- so far, from taking part in the Fox/Congressional Black Caucus debates because of Fox's participation.

These liberals are not satisfied with mere posturing or ineffective performances. They've made it known they will not tolerate the Democrats' incompetence and half-measures toward undermining our war effort. They demand the whole enchilada.

Without question, they are forcing Democratic presidential candidates to commit further to the left than they should be comfortable defending in the general election. They are pressing for universal health care, immediate withdrawal from Iraq, shifting resources away from the military during time of war, re-handcuffing our intelligence agencies and otherwise compromising our proven successful methods against fighting terrorism and bolstering national security, declaring an end to the war on terror and reverting to treating it as a law enforcement matter, radical growth-suffocating action to deal with its highly debatable assertions on manmade global warming, wealth and production-punishing tax increases, advancement of the radical homosexual and pro-abortion agendas, further radicalizing the culture against traditional values, discouraging immigrant assimilation, adulterating the Second Amendment, using the government and academic institutions to suppress conservative speech and other assorted nightmares.

The pressure is working; fueled largely by the growing unpopularity of the war and conservatives' pronounced disappointment with President Bush over immigration and other issues, the Dem candidates are already much further to the left than liberal John Kerry was in 2004.

Since Democrats have come away unscathed and unaccountable for their duplicity in blaming their initial support for the Iraq war on President Bush's mythically alleged WMD intelligence distortions, they might feel bulletproof from having to account in the general for their current lurch toward radicalism in this pre-primary season.

Without minimizing the real and justified concerns of conservatives over the administration's immigration policy, which must be resolved, let it not be overlooked just how radical is the leftist agenda for America: They envision a completely different nation from that of mainstream Americans. Let it not be overlooked that these radicals, at this very moment, own the Democratic Party and all its movers and shakers.