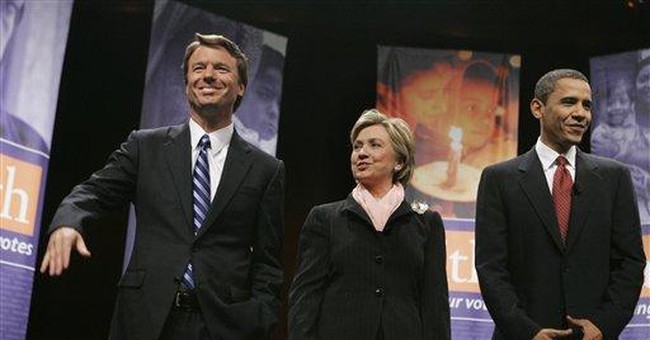 You've got to hand it to Democrats. They are bountiful in chutzpah and relentless in trying to expand their tent. With the second-class treatment they routinely mete out to Christian political activists you'd think they'd be more discreet about proselytizing Christians on the virtues of liberalism. Think again.

Never mind that Democratic leaders become apoplectic every time Republicans so much as whisper about Christianity in the public square; their presidential candidates came right out in the open Monday night and attended Sojourners' Forum on Faith.

Mainstream media reporters couldn't hide their incredulity as they detailed the religious statements of candidates from Hillary Clinton to John Edwards, who just couldn't brag enough about the importance of prayer and faith in their lives. A Washington Post article covering the forum was titled "The Democrats' Leap of Faith."

You've got to admire the Democrats' tenacity. No matter how consummately the Republican Party is destroying itself, Democrats refuse to concede any voter bloc.

Of course, this is nothing new. Jim Wallis, founder and organizer of Sojourners, has been trumpeting the compatibility of evangelical Christianity with political liberalism for a number of years, most prominently in his book "God's Politics," and exhorting Democrats to pursue evangelicals with an evangelical fervor.

Wallis isn't the only one on the left with such ideas. Washington Post columnist E.J. Dionne has written passionately about the family-values friendliness of liberal domestic programs, particularly concerning Senator Ted Kennedy's family leave advocacy.

Dionne wrote, "If you are for family values, how can you oppose Kennedy's call to give all employees at least seven days of paid sick leave a year so they don't face 'a cruel choice between losing their job, or neglecting their sick child or sick spouse at home.'"

No matter which leftist is making the point, the theme is generally the same: Republicans don't have a monopoly on family values or even Christian values. In fact, Democratic liberal values, they say, more closely reflect the true Christian spirit.

DNC chairman Howard Dean once asked indignantly, "How can Republicans get to talk about moral values when they don't have any? I don't want to hear any lectures about Christian values from the Republican Party. They are the Pharisees and the Sadducees."

Former DNC chairman Ed Rendell said, "You have to look awfully hard" to find anything about abortion or gay marriage in the Bible. But in every chapter of the Bible, and the Koran, and the Torah, he said, are references to the Golden Rule, which squares more with political liberalism than conservatism.

Jim Wallis expressed similar sentiments, saying that abortion and same-sex marriage are not the only Christian issues. "Faith informs policy in other areas as well," wrote Wallis. "What about the biblical imperatives for social justice, the God who lifts up the poor, the Jesus who said, 'blessed are the peacemakers'?"

It is undeniable that liberals claim to champion the poor and that Jesus talked tirelessly about the poor. But the myth is that conservatives have less compassion for the poor; they just don't believe the best way to eradicate poverty is through government-coerced redistributions of wealth. Capitalism is squarely in line with Biblical principles. By contrast, one would be hard-pressed to make a biblical case for societal sanction of same-sex marriage or abortion.

Democratic evangelicals also fail to explain liberals' high comfort level with secular values and their unmistakable hostility toward Christians, mainstream Christian values and, sometimes, the very concept of absolute truth. You might recall Democratic Senator (and presidential candidate) Joe Biden confessing, "We have too many elites in our party who look down their nose on people of faith."

Biden is right. The examples of liberal Democrats denigrating Christians are too voluminous to detail (without writing a book about it), from columnist Maureen Dowd and others likening Christian fundamentalists (read: Bible-respecting Christians) to the Taliban, to liberal commentators saying Christian conservatives are "reality challenged," to Clinton's Labor Secretary Robert Reich arguing that "terrorism itself is not the greatest danger we face" and implying that the real threat is from "those who believe that truth is revealed through Scripture and religious dogma."

Liberals likewise reveal their true colors when they lobby for strict "separation of church and state" when it comes to the remotest presence of Christianity in the public square, but promote outright government endorsement of radical secular values that are unambiguously inimical to biblical truth.

Professing evangelical liberals might achieve marginal success in expanding their base this way, but I would hope the overwhelming majority of Christian voters would follow substance over form.