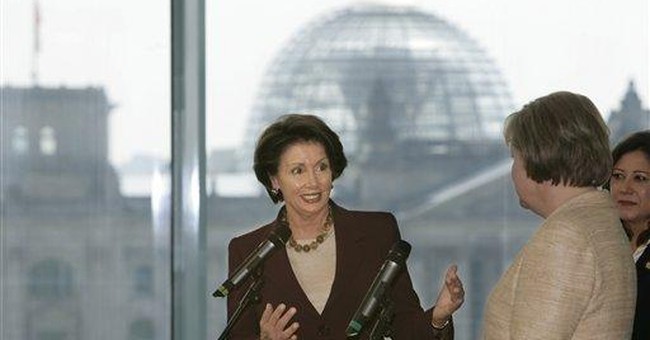 Whether or not blind faith in man-made, catastrophic global warming has become a new religion, many of its adherents, ironically, embrace it with the same type of unquestioning zeal they sloppily attribute to and summarily condemn in Christians.

Case in point: House Speaker Nancy Pelosi, after leading a congressional delegation to Greenland, declared that she and her fellow travelers saw "firsthand evidence that climate change is a reality, there is just no denying it."

Pelosi is also sure the "global warming" is caused by human beings. She said, "It wasn't caused by the people of Greenland; it was caused by the behavior of the rest of the world."

Well, that settles it then. Speaker Pelosi sees Greenland's ice expansion, and the world is coming to an end. The debate is even more over; we now have a consensus about the already-declared consensus! Never mind substantial contrary evidence and opinion.

Pelosi, in keeping with her M.O. of lauding our foreign critics and enemies, praised the German government for its leadership on global warming. She made the trip -- consistent with her self-appointed role as shadow commander in chief and foreign policy czar -- in anticipation of the upcoming Group of Eight summit. There, the leading industrialized nations will discuss possible successors to the Kyoto Protocol, the international treaty, set to expire in 2012, that places limits on carbon dioxide emissions.

In the Jimmy Carter spirit of bashing the president and the United States on foreign soil in front of foreign leaders who are emboldened by American self-flagellation, Pelosi subtly criticized President Bush for failing to endorse Kyoto. Once again, she sided with a foreign government over her own.

Pelosi said, "We hope that we can all assume our responsibilities with great respect and that our administration will be open to listening to why it is important to go forward perhaps in a different way than we have proceeded in the past." In other words, the president should get off his selfish, imperialistic, unilateralist duff and join European nations in their quest to bankrupt themselves in furtherance of a highly dubious (and debatable -- yes, debatable) cause.

Before Pelosi condemns President Bush too fiercely on this subject, she should be reminded that Democrats, along with Republicans, passed a unanimous Senate resolution (95-0) in 1997 opposing the United States's participation in Kyoto absent certain conditions. First, it must apply to developing nations, and second, it must not result in serious harm to the U.S. economy. Moreover, President Clinton never sent it to the Senate for ratification.

What about the environmental track record of Germany and other European nations that signed the Kyoto treaty and, along with double agent Nancy Pelosi, are scolding the United States for destroying the world?

Again, the facts are not Speaker Pelosi's friends. According to Chris Horner's delicious "Politically Incorrect Guide to Global Warming and Environmentalism," Europe promised it would live up to Kyoto; it isn't. It promised its carbon dioxide emissions would be down, but they're up, it promised its emissions would be dropping, but they are rising. "Since 2000 they are increasing three times as fast as America's." No matter. Europe still lambastes America because, like good liberals, it subscribes to the axiom that good intentions mean more than results.

Horner also exposes the lie that we have nothing to lose by signing on to draconian treaties like Kyoto, even if the global warming scare turns out to be a hoax. One of several damning Department of Energy studies estimates that our Gross Domestic Product would be reduced by at least $77 billion and by as much as $283 billion. Add to this the inconvenient truth that reductions in economic productivity are often accompanied by reductions in environmental friendliness.

Horner sets forth countless other refutations of warming dogma and reveals that "even Kyoto's proponents acknowledge that despite accepting, for the sake of argument, Kyoto's underlying assumptions, and even were it implemented fully, universally, and perfectly, it would have no detectable effect on temperature increase. Kyoto might avert -- delay, in fact, by just six short years -- projected future warming of an undetectable few-hundredths-of-one-degree Celsius by 2050."

While I'm sure many are convinced of the benign intentions of the global alarmists and discount any conspiratorial design on their part to radically compromise our capitalism, liberties and sovereignty, it's hard to understand how they would proceed differently if they were active conspirators.

Those who are willing to give up so much in pursuit of so little can't possibly be accused of an affinity for the glorious uniqueness of America. We must keep a sharp eye on them.