Memo to Dem Base re Hillary's Quick Trigger Finger 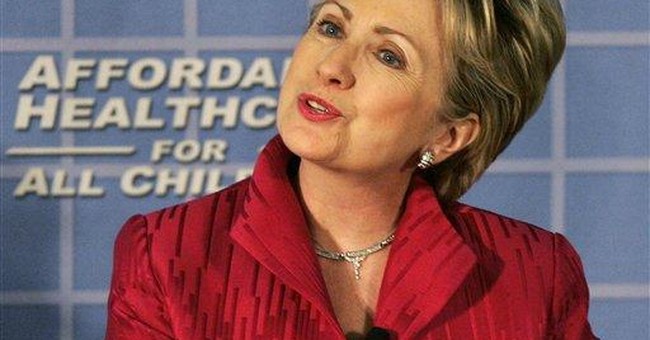 Any time I write something about Hillary Clinton I hear catcalls from the left accusing me, alternatively, of obsessing over her or unfairly attacking her. Truthfully, none of us has obsessed over her enough, considering she is far and away the frontrunner in the Democratic presidential field and could be the next president.

More than that, conservatives have a duty to spotlight Hillary's record, since the mainstream media (MSM) almost always give her a pass, throw her softballs and ignore her highly relevant past, especially as co-president.

Contrary to her vaunted image, Hillary rarely says anything that isn't programmed and clichd, but when she does, it's often revealing. Recently, she said President Bush is running a "government of the few, for the few and by the few." Forget the cheesiness of her populistic modification of Lincoln's aphorism. Forget that there's no evidence, including Bush's tax-cutting policies that have benefited people across the economic spectrum, to support her anti-capitalist, anti-freedom appeal. Just remember it is such an appeal.

That socialist tone is also present in her ever-cockier promise for universal health care and her vague noises about making college education another entitlement. We can't afford to be complacent about Hillary Care simply because Hillary failed so miserably in her first attempt to initiate it. Health care costs have continued to grow since then, and increasing percentages of people are now dependent on the federal government, not to mention ignorant of the relationship between free markets and the vitality of our economy.

More and more people obviously believe that government can simply create wealth. Otherwise, why would they overlook that unchecked punitive measures on producers will ultimately redound to everyone's economic detriment, not just the producers? So let's not fool ourselves into thinking that Hillary couldn't wreak serious havoc on the economy as well as on the quality of health care in this country.

As troubling as Hillary's domestic agenda are her foreign policy ideas, for which she's also mostly received a pass from the MSM, if not from the rabid antiwar base.

Hillary has been all over the board on Iraq. By reviewing her public statements on it, one would be hard-pressed to determine what she truly believes about it.

My best guess is that Hillary, like most Democrats at the national level, is instinctively soft on defense and the global war on terror as a matter of ideology. But if she were to become commander in chief, her ideology might yield, like her husband's did, to her quest for executive power and the thrill of exercising it. Though Bill Clinton, in terms of funding, starved the military, he was not shy about using it for all sorts of purposes, including global meals-on-wheels excursions.

We can expect that Hillary would be similarly energetic. And since she is currently emphasizing her closeness with her husband and taking credit for his policy legacy, we have every right to hold her accountable for how they conducted themselves as co-commanders in chief.

While hypocritical national Democrats and the MSM will ignore the Clintons' actual abuses of executive authority, though having savaged President Bush over false allegations concerning same, the antiwar base is not likely to be as forgiving.

As such, let's remind the base of Hillary and Bill's militarism and their utter defiance of Congress. Liberals can claim -- falsely -- that Bush duped Congress into supporting the Iraq war resolution, but the Clintons didn't even bother. They just went right on, without congressional approval, to make their war mischief -- unilaterally, to borrow a word from the liberal lexicon.

To whet the base's appetite, I refer it to an article by law professor John C. Yoo, "The Imperial President Abroad," appearing in "The Rule of Law in the Wake of Clinton" (Roger Pilon ed., CATO Press, 2000). In it, Yoo reminds us that, "When it comes to using the American military, no president in recent times had a quicker trigger finger,"

Even more noteworthy than the Clinton administration's frequent deployments of our troops in Serbia, Kosovo, Bosnia, Haiti and his cruise missile volleys into Sudan, Afghanistan and Iraq, is that "in none of those cases did Congress provide authorization for the Clinton's decision to use force abroad."

Note that we're not debating the technicality of a formal declaration of war. Clinton didn't get congressional authority at all. I'm out of space, but the specific data on the Clintons' several deployments in the face of congressional disapproval is documented (including the damning vote counts) in the article.

Let's make sure the base gets wind of these things before it's too late. Hillary needs to account for her usurpation of congressional authority and her actual abuses of executive power.