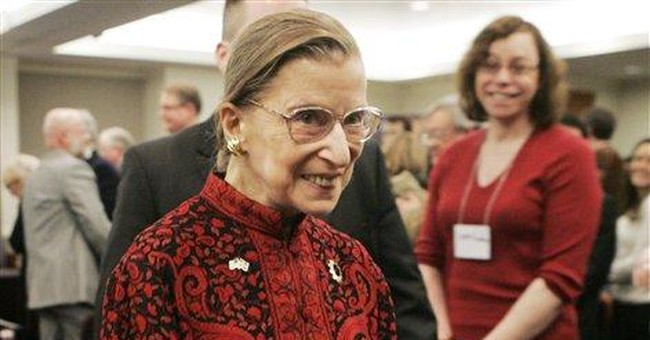 Justice Ruth Bader Ginsburg's dissenting opinion in Gonzales v. Carhart illustrates the moral depths and quagmires of irrationality to which the political and cultural left in this country have descended.

In Carhart, the United States Supreme Court upheld the Partial-Birth Abortion Ban Act of 2003, a limited congressional ban on partial-birth abortion that was shot down by lower federal courts.

What stands out in Ginsburg's opinion is not her condemnatory legal critique of the majority opinion, but her philosophical/political assertions. While she pays lip service to the supposedly conflicting interests of the government in "safeguarding a woman's health" versus "preserving and promoting fetal life," it is clear that neither of those hold a candle to her interest in promoting "a woman's autonomy to determine her life's course, and thus to enjoy equal citizenship stature."

Much of Ginsburg's opinion reads like a feminist manifesto straight from the National Organization for Women. One gets the sense that she believes what is really at stake in the abortion debate is not the vindication of "some generalized notion of privacy." No, this is purely and simply a power struggle on behalf of women pursuing their presumably unrealized quest for complete equality.

Ginsburg and those of like mind obviously regard any restrictions on abortion as threatening to women. Such restrictions, in their view, proceed from a regressive mindset "when women were 'regarded as the center of home and family life, with attendant special responsibilities that precluded full and independent legal status under the Constitution.'"

That mindset is "'no longer consistent with our understanding of the family, the individual, or the Constitution.' Women, it is now acknowledged, have the talent, capacity and right to participate equally in the economic and social life of the Nation.'" In other words, a woman's right to kill a baby in her womb is essential to her being a complete woman, or, to paraphrase Ginsburg, it is central to her life.

Apparently, women's progress in this struggle is so fragile that an open acknowledgment of the unborn's humanity must not even be permitted because it might somehow reverse their gains. No, we can't allow little details like the life of the unborn to encroach on "the destiny of the woman [to] be shaped on her own conception of her spiritual imperatives and her place in society."

So extreme and inflexible is the Ginsburg position on a woman's right to control her own destiny that she writes, "the notion that the Partial-Birth Abortion Ban Act furthers any legitimate governmental interest is, quite simply, irrational."

Oh? So it is irrational to contend that the government has a legitimate interest in protecting the life of an unborn human being? Talk about the language (and logic) being turned inside out!

Nevertheless, under the Ginsburg worldview, the right to life of the unborn appears completely subordinated to the interest of women in having complete autonomy over their "reproductive decisions."

One has to scratch one's head to think of any other liberty that is so absolute that it permits no restrictions. We don't think that way regarding other liberties.

For example, would anyone seriously argue that my right to swing my fist entitles me to commit battery on another person? Does our right to sexual liberty entitle us to rape? Why do the radical pro-abortionists regard any restriction on abortion, which doesn't just harm another person, but kills him or her, an impermissible encroachment on a woman's liberty?

The only way it is logically possible to couch the abortion debate in terms of a woman's right to her own autonomy is if we accept the premise that the second party in the equation, the unborn, is not a party at all, but a meaningless mass of tissue bereft of human dignity. Sadly for the pro-aborts, it is increasingly clear from any perspective we choose to examine it: scientific, spiritual or otherwise, that the unborn is a human life. If the pro-aborts were not aware of the humanness of the unborn, they wouldn't grudgingly pretend to strive to make abortion "safe, legal and rare." There is no moral imperative to protect a human-less mass of tissue.

If anyone believes I am overstating Ginsburg's extremism, just remember the context. She writes in defense of that most abominable of procedures, "partial-birth abortion."

Can you conceivably wrap your arms around the perverted concept that a woman can't be a real woman unless she has the complete autonomy to direct a doctor to partially deliver her baby for the purpose of killing it? My purpose isn't to offend here, but, truly, I just don't get it.