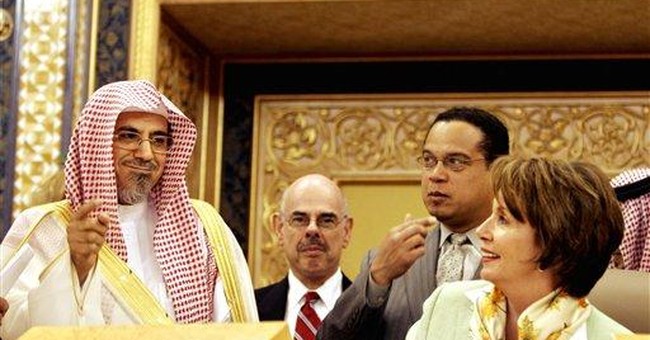 In our outrage over Nancy Pelosi's unconstitutional and, according to some legal experts, criminal attempt to steal the reins of American foreign policy from President Bush, let's not tacitly give her a pass for her egregiously wrongheaded assertion that "the road to Damascus is a road to peace."

Apparently Pelosi believes: a) that the terrorist-sponsoring Syrian regime is a nation of good will, whose leaders are reasonable and interested in resolving disputes through peaceful dialogue, and b) that the U.S. policy of isolating Syria and refusing to negotiate with its leaders until it renounces its support of terrorism is wrong.

How is this different from the Pelosi liberals' position concerning endless "negotiations" with Saddam Hussein? To them, it didn't seem to matter that he had violated umpteen U.N. resolutions and was openly defying weapons inspectors. They always wanted to extend the time for diplomacy and defer the use of force.

Their mindset toward Iranian president Mahmoud Ahmadinejad is no different. They believe he can be reasoned with and that his grievances can be addressed through jawboning. We are the unreasonable ones, not Ahmadinejad, for refusing to engage in bilateral talks with him.

Underlying this liberal penchant for diplomacy at all costs is the assumption that these dictators have legitimate grievances against the United States, that they are prepared to negotiate in good faith and that they desire peace on other than their own nefarious terms.

But are they in good faith? Neither the Bush administration nor the administration of Israel's Ehud Olmert believes so. They say that as long as Syria is supporting and supplying our terrorist enemies in Iraq and in bed with Hamas and Hezbollah, there is no point in negotiating.

The Bush and Olmert administrations understand that a terrorist is a terrorist, and terrorists don't believe in true, give-and-take negotiations. Otherwise, they wouldn't be terrorists.

If Pelosi and her cohorts actually believe Syria has any shred of a legitimate moral basis to support flagrantly terrorist organizations, perhaps they could let us in on the secret.

Do they sympathize with Syrian President Bashar Assad's causes? Do they believe one man's terrorist is another's freedom fighter? Or do they concede that Assad sponsors terrorism, but think he can be sweet-talked out of it?

For Pelosi to take it upon herself, in defiance of presidential authority, to approach Assad as if he were the reasonable one and the United States were militant and intransigent is simply unconscionable. For her to prop him up as a prospective peace partner is something out of "The Twilight Zone."

Then again, no matter how much the global scenery changes, many things remain the same, and one of those things is the liberal mindset toward evil regimes and dealing with them through sheer diplomacy -- as opposed to confronting them from a position of strength with the express or implied use of force.

Liberals advocated this very same approach to our last global enemy: the communists. In their minds, there was always a rough moral equivalence between the United States and the Soviet Union, especially concerning the arms race. The Soviets weren't so much an evil regime bent on destroying the United States and world domination as they were reacting defensively to our jingoistic nuclear proliferation. If we would just quit provoking them and unilaterally reduce our armaments, the Soviets would follow suit.

Even after history has repudiated the liberals' approach and vindicated Reagan conservatives, liberals still insist on romanticizing former Soviet leader Mikhail Gorbachev. Truth be told, they credit Gorbachev more than Reagan for the end of the Cold War, even though Gorbachev was dragged kicking and screaming toward that end.

At the root of the liberals' misguided notion that evil can be eradicated by talking it to death and that evil dictators are honorable and susceptible to good-faith overtures is their pervasive moral confusion.

How can we expect any different from those who supported the Nicaraguan Sandinistas against true freedom fighters, who lionize Fidel Castro, who believe al-Qaida prisoners when they accuse Americans of torture and who can't even seem to remember how bad things were in Iraq under Saddam Hussein?

If we think it's bad having Nancy Pelosi as the shadow commander in chief, can you imagine if one of her ilk were actually elevated to the real job? Perish the thought.