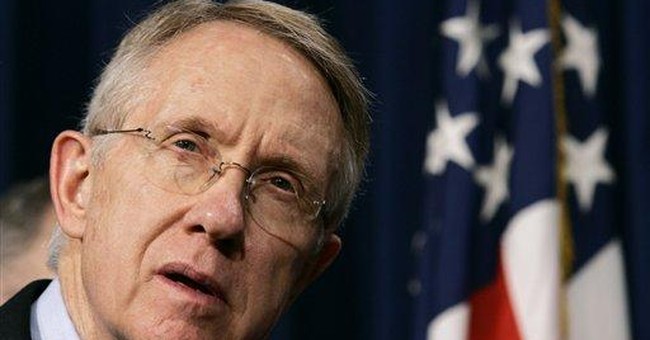 The way I see it, politically speaking, Democrats better hope we don't withdraw our troops from Iraq before the 2008 presidential and congressional elections. Not only would they be damaged by the inevitably catastrophic consequences our premature withdrawal would cause, but voters would also begin to see their obstruction in the prosecution of the war is not limited to Iraq.

Think about it. Right now they are basking in every bit of bad news the mainstream media selectively ensures comes out of Iraq, and they are daily ratcheting up the pressure on President Bush to set "benchmarks" and "timetables." Given the war's apparent unpopularity, Democrats can't help but profit in the short term as they appear to be advocating a position that aligns them with the majority of Americans.

Indeed, the more they hear themselves rant, the more emboldened they become toward extremism and to attempt legislation outside their constitutional authority.

A telltale sign of their increasing cockiness is their announcement that they are about to introduce a bill to cut funding for the Iraq war. Up until now, they've lacked the courage to go that far and have just danced around the issue.

But just off the presses, we read that Senate Majority Leader Harry Reid and Sen. Russ Feingold are co-sponsoring a bill that will "bring our involvement in the Iraq war to an end."

The relevant part of the bill states: (c) Prohibition on Use of Funds -- No funds appropriated or otherwise made available under any provision of law may be obligated or expended to continue the deployment in Iraq of members of the United States Armed Forces after March 31, 2008."

Be aware that as recently as Nov. 30, 2006, Sen. Reid said something quite different. He said, "We're not going to do anything to limit funding or cut off funds."

What has changed since then that would warrant such an about face? How about the fact that the troop surge is showing signs of success? No, that would cut the other way now, wouldn't it? More likely it's the increasing pressure from the antiwar base and the reportedly solid poll numbers against the war.

But, as I said, the Democrats better be wary of what they wish for. If we do end our significant military involvement in Iraq before the Iraqi forces can protect themselves and their new government as a result of Democratic pressure, Democrats will have to answer for the mayhem and instability that will ensue.

Even if we have relatively secured the situation there enough to withdraw before the 2008 election, which is doubtful, it's unlikely that Democrats will benefit politically from that development.

An end to the Iraq war will not end the war on terror (WOT), as much as many liberals appear to believe otherwise, since they think the WOT is but a figment of our neoconservative paranoid imagination. With our withdrawal from Iraq, the nation will once again have an opportunity to focus on the Democrats' policies on the WOT, which have been obscured by the enormous elephant in the room: Iraq. It will not be a pretty or comforting sight.

Without the aid and comfort of an unpopular war (Iraq), voters, assuming Republicans can sharpen their communication skills, will be reminded of the Democrats' sympathy for the enemy's position on a far-ranging array of issues related to the WOT.

While the Democrats have been able to pass off their obstructionism in the WOT as their opposition solely to the Iraq war, the public will soon see it goes way beyond that.

There will be nothing to shield their knee-jerk sympathy for the constitutional civil rights and access to civilian courts of enemy combatant prisoners in Gitmo and elsewhere, their frantic demands that we close Gitmo, their exaggeration of the supposedly freedom-swallowing provisions of the Patriot Act, their outrage at our highly effective NSA terrorist-monitoring program, their defamation of our soldiers as torturers, the proposed unionization of airport security workers, their appeasement orientation toward Iran, their willingness to subordinate decisions concerning our national security to the United Nations and their overall desire -- by all indications -- that we reorient our approach to terrorists away from war and toward law enforcement, as in the glory days of the Clinton presidency.

Let's see how they fare in these debates if they get what they wish for on Iraq.