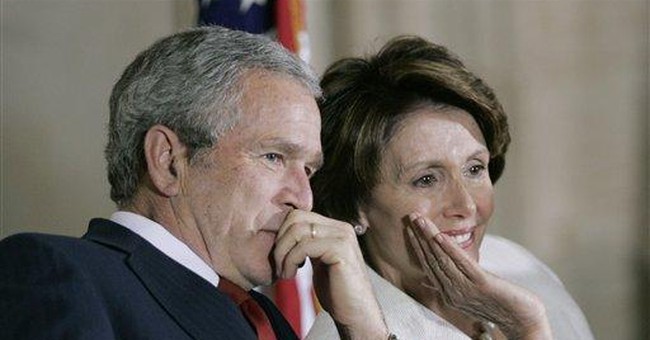 I simply cannot believe President Bush withdrew Sam Fox's nomination for Belgium ambassador. When will he confront congressional Democrats with the same resolve he brings to the war on terror? He doesn't need to get down on their level of stridency and sniping, but he should scrap the illusion that they are operating in good faith and want to work collegially or constructively with him.

If the last six years prove nothing else, they show that Democrats are unwaveringly hostile to this administration. Bush's cordiality in return has only emboldened them to new heights of incivility.

With their victory in November it has gotten much worse. With congressional control and their subpoena power they're like spoiled, malicious children with a new toy. According to the L.A. Times, they've already held over 100 oversight hearings.

These are the people -- with the help of their militant base -- who have mercilessly and effectively demonized some of the finest public servants to grace this nation with their time and talents in years, including Vice President Dick Cheney and Defense Secretary Donald Rumsfeld. No, I haven't lost my mind, and yes, I know the conventional wisdom commands that we believe these decent and honest people are devils incarnate. It's a crying shame that it's even necessary to vouch for their character, but it is.

Lest I be misunderstood, I'm not suggesting the president reciprocate in kind and treat Democrats as disrespectfully and unfairly as they've treated him and his cabinet. I'm not advocating that he employ the same abusive and underhanded tactics they've employed against him.

But I am suggesting he stand up to these politicians who have made him their sworn enemy and that he go on the offense in getting his message out -- as passionately, unapologetically and relentlessly as the Democrats have. I am suggesting he challenge every one of their lies with the indignation they deserve.

Unless he devotes some energy toward making his case and defusing the Democrats' propaganda and slander, he'll make less headway in Iraq and the war on terror, and on domestic policy across the board. He'll do little to regain credibility with those who have bought into the lies about him, he'll further dispirit the conservative base, and the foundation for a conservative victory in 2008 will continue to erode.

For starters, the president could unsheathe his uninitiated veto pen and strike down the destructive bill requiring that he prematurely withdraw our troops from Iraq, lose the war there, ensure that our troops have died in vain there, bolster the cause of terrorism worldwide and virtually donate Iraq to the jihadists as a base for international operations. He should use his bully pulpit to shout out that his cynical political opponents are proposing to rob the public treasury to bribe fellow members into voting for that disgraceful bill.

With due respect to some conservatives urging otherwise, I would exhort President Bush not to cashier Attorney General Alberto Gonzales, even if Gonzales has mishandled the perfectly kosher U.S. attorney firings. He cannot give in to the bloodthirsty politicians who will use that capitulation to validate their false claims of impropriety against the administration. Sen. Patrick Leahy has already promised to continue the investigation even if Gonzales resigns.

And, notwithstanding the regrettable recommendation of Defense Secretary Robert Gates, President Bush must not close down the Gitmo terrorist detention facility. Why on earth would he even consider such foolishness, unless he wants to concede as true the Democrats' torture fabrications, bolster Al Qaeda's propaganda against us and saddle himself with the significant problem of deciding what to do with these killers? Enough of this hand-wringing insanity.

Why can't we all just get along, you ask? I don't know, but I suggest you direct that question to the Democratic leadership.

In the meantime, I pray the president will have the strength and support to overcome his domestic opponents so that he can continue to lead us effectively against our terrorist enemy.