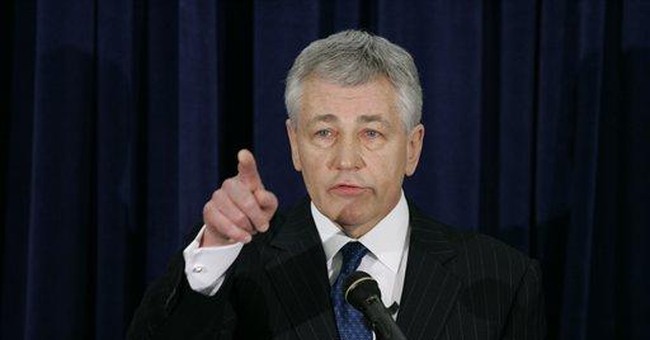 RINO (Republican in Name Only) Sen. Chuck Hagel boldly suggests (without being bold enough directly to identify with the sentiment) that some congressmen are considering impeachment proceedings against President Bush because he is flouting Congress and the public on Iraq. Hagel needs to be pressed on this.

"Any president who says, 'I don't care' or 'I will not respond to what the people of this country are saying about Iraq or anything else' or 'I don't care what Congress does, I am going to proceed' -- if a president really believes that, then there are … ways to deal with that," said Hagel on ABC's "This Week."

You would think that a person who has made it to the United States Senate would have a least a rudimentary understanding of our constitutional government. You would assume he would have grasped that impeachment is a remedy to remove a president (or other officer) for the commission of high crimes and misdemeanors.

While "high crimes and misdemeanors" is a term of art, it most certainly does not encompass presidential action, which, though legal and constitutional, is not popular with the American people or a majority of Congress.

If a plebiscitary democracy is what the framers of our Constitution intended, they could have saved themselves a lot of trouble and paper, not to mention the extensive studies they undertook leading them to the conclusion that a constitutional republic -- not a pure democracy -- offered the best chance for securing the blessings of liberty and prosperity for America.

Indeed one of the main reasons our nation has flourished and survived is precisely that it never purported to be a pure democracy or anything remotely resembling it. If the democratic ideals of the French philosophes had prevailed with America's constitutional architects, our experiment in constitutional governance would have long since terminated.

For Sen. Hagel to imply that the president serves at the pleasure of Congress and the people (a la the British system) betrays a startling misapprehension of our unique form of government. And this man is actually considering a run for the presidency -- on the Republican ticket, no less?

But, for the sake of further discussion, let's move beyond Hagel's fundamental misunderstanding of American civics. Since his main complaint against the president seems to be that he is not marching to the commands of Congress or the people, isn't it interesting that without a fortuneteller or divining rod we can't even be sure what those commands are?

If public opinion surveys were to be binding on the president, which ones should he heed? (Where are those silly computer polls candidate Ross Perot promised when you need them?) But if we voters are supposed to be the collective commander in chief, perhaps we should forfeit our franchise as well for vacillating and sending mixed signals to the president on Iraq.

Indeed if congressmen want to impeach the president for not following their dictates, perhaps they should first tender their own resignations for the same reason. That is, Democrats claim they were elected to majority control in 2006 with a mandate to end the war in Iraq, and yet, without grotesque bribes from the public treasury they can't even muster a majority to pass a resolution to enforce their "mandate."

Someone needs to deliver Sen. Hagel and his like-minded congressional colleagues a memo explaining that the president is commander in chief and that he cannot be fired either by Congress or the people in the absence of committing high crimes and misdemeanors, which involve monumentally more than policy disagreements with the legislative branch. If anything, it is certain congressmen, not the president, who are exceeding their constitutional authority by attempting to usurp the president's lawful power as commander in chief.

Populist politicians are fond of congratulating themselves for attempting to implement the public's will, but it was just such demagogues the Framers had in mind when they installed safeguards in our constitutional framework to prevent a mobocracy.

Sen. Hagel owes the people, who he claims to represent, an apology for his reckless rhetoric.