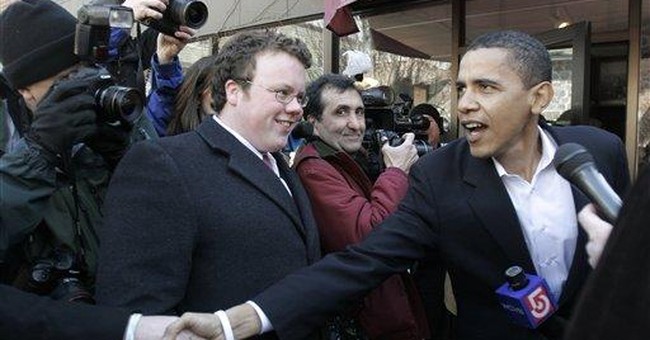 Barack Obama's glib announcement in declaring his candidacy for the presidency provides clues about the man and reminds us, contrary to his stated message, of the great chasm that separates people of different political orientations.

Mr. Obama appears to have fallen prey to the wave of public adulation accompanying the media's hype about him -- to the point that he broke his recent promise not to seek the presidency at this early stage in his inexperienced political career.

I realize many politicians, like Hillary Clinton, break similar such pledges. But with Obama it's a bit different. He actually seemed to believe his earlier admission that he hadn't yet accumulated sufficient miles in government to prepare himself for what is not an entry-level position. On the surface his confession reflected a degree of humility, or at least an awareness that the public wouldn't seriously consider someone so green.

But his formal announcement, by contrast, evinced an abrupt graduation from any hint of his previous humility. He even acknowledged as much, admitting "there is a certain presumptuousness in this, a certain audacity. I know I haven't spent a lot of time learning the ways of Washington."

Many interpreted Obama's follow-up remarks as lofty and uplifting. I think they are further evidence of his arrogance, either newfound or previously concealed, or his abject insincerity. While not quite portraying himself as a messianic figure, he did project that he, personally, was needed at this time to deliver our society from its ailments.

Do you suppose Obama really believes the Rodney King philosophy he espoused: "Why can't we all -- as "one people" -- just get along?" Does he mean the problems of America and its people will disappear if we just realize we are "one"?

That's hard to believe when you understand that "E Pluribus Unum" ("Out of many, one") is as foreign to the modern liberal mindset as the notion that there is anything redeeming about big corporations.

Instead of promoting a common culture with a common language to unite us "as one people," they worship at the altar of multiculturalism and preach an inherently divisive diversity that is preoccupied with race and gender consciousness.

Obama's message is even harder to believe when you consider his allusion to the possibility of a "different future." By longing wistfully for "a different future" is Obama not making a commentary on the misery of our present circumstances?

Indeed, when liberals look at America they don't see a land of robust prosperity and outward benevolence. It is a nation where wealth is unfairly distributed and one that imposes its will on the world through oppressive imperialism. It stirs up terrorism, wreaks havoc in an otherwise peaceful Iraq and tortures its military prisoners.

If liberals and conservatives don't see or envision the same America; if we can't even agree on the problems we face, how easy will it to be for us to reach consensus on proposed solutions?

When I see Obama proposing a number of genuinely conservative ideas, I'll reconsider the ludicrous possibility that he values bipartisanship and getting along more than advancing his liberal vision for America.

Let's put Obama's professed longing for harmony among the people to the acid test. Let's tell him that we hawkish conservatives are not going to feel real chummy with him and his colleagues as long as they are telegraphing to the enemy that we're ready to surrender in Iraq by withdrawing our troops by March 2008. If we convince him our condition for breaking bread is that he forthwith withdraw his withdrawal idea, then we'll see how much he truly values breaking bread over breaking faith with America's cause in the war on terror. We'll see how much he truly believes in "the power in conviction" when that conviction concerns ideas he considers abhorrent.

While it goes without saying that we should treat each other respectfully and seek to work together, it is the height of folly to believe that people of different worldviews don't see America and its problems through wholly different lenses.

Let Obama vigorously advocate, through his power of conviction, his vision. But couldn't he please spare us the empty platitudes about our "oneness," so that we can get on with the national debate?