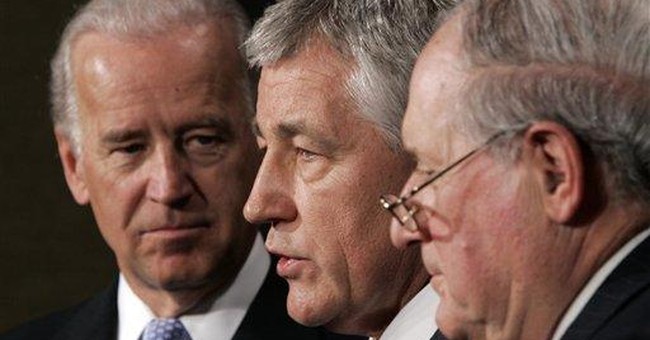 Democrat senators Joseph Biden and Carl Levin appeared on "Fox News Sunday" to promote their toothless resolution against the president's troop "surge" in Iraq, but ended up unwittingly reinforcing their party's image as lacking the requisite seriousness to run the war.

Levin said, "It is a political solution which is needed in Iraq. Recent events prove that you can make some political progress perhaps without deepening military involvement by the United States."

While there's no doubt that Iraqi politics are quite relevant, Levin's formulation is precisely backward. Though we've been urging Iraqi Prime Minister Nouri al-Maliki to quit protecting Moqtada al-Sadr and his militia, it wasn't until he gave the United States the green light to drop the hammer on the mini-tyrant that Sadr ended his boycott and sent his political flunkies scurrying back to the Iraqi parliament.

So yes, politics matters. But the lesson is that terrorists and lawless insurgents only understand the politics of force. You don't extract results from them by jawboning around a conference table. You either use force or credibly threaten it. Whether our government follows up is another matter, but this is a start, and it wasn't achieved through highbrowed diplomacy.

Sen. Biden sidestepped Chris Wallace's question as to whether his and Levin's resolution would embolden the enemy and Osama bin Laden and discourage our troops, as Vice President Cheney suggested.

Biden responded with an ad hominem attack against Cheney, saying, "He doesn't know what he's talking about. He has yet to be right one single time on Iraq."

Fine, Senator. We can stipulate that you still hate Cheney. But how about the question?

Instead of answering, Biden said, "Bin Laden isn't the issue here. The issue is, there's a civil war. Does anyone support using American troops to fight a civil war?"

Sorry, Senator, but our premature withdrawal would serve to validate bin Laden, embolden the enemy and discourage our troops. Bin Laden personally may not be the issue. But the terrorists' attitude does matter, and it will be affected by outcome of the Iraq war.

But Biden and his cohorts obviously can't get past their simplistic view that Iraq is purely a civil war, free from significant external influences, excepting ours, and whose outcome will be free of external consequences. Biden said, "There's an overwhelming consensus that we should de-escalate the war."

Wouldn't it be nice if it were so easy? Biden presents childishly false choices. It's not a matter of whether people are for or against the war in Iraq, as if it is neatly contained and perfectly isolated.

Even if Iraq is partially a civil war, it is much more than that. Even if you choose (wrongly) to believe Saddam Hussein's regime was irrelevant to global terrorism, global terrorists have staked a major claim to Iraq and its future instability and unfriendliness toward the United States.

But the antiwar crowd can't see through the fog they've created by obsessing on the war supporters' supposed motives. They have never understood that the great majority of supporters didn't perceive Iraq to be a war of choice. Iraq was not a playground for imperialistic, neoconservative experiments in the exportation of democracy.

Most war supporters believed -- reasonably -- that Iraq possessed stockpiles of WMD and was voraciously seeking more. They believed it represented a threat to the United States and its allies and that its lawlessness and defiance toward the world community had to be dealt with.

They will be quite pleased with a successful "democratic" regime and even hope that it will have a contagious impact on the region. But they didn't primarily base our support of regime change on those goals.

From the beginning, war opponents have overblown the numbers and influence of the "neoconservative," who is just a straw man they've erected as an easy target to attack rather than dealing with the real issues involved.

Regardless of whether Saddam represented a serious threat or whether terrorists cared deeply about Iraq before, Iraq is now an integral part of the global war on terror. We cannot make these truths disappear just by wishing them away. Nor can we end Iraq's relevance to the global war simply by withdrawing our troops and fantasizing away the inevitable disastrous consequences.

Biden & Co. aren't even serious-minded enough to put their legislative money where their mouths are: away from the troops. They insist on hiding behind a meaningless sense-of-the-Senate resolution, to avoid future accountability for their irresponsible advocacy.

Democrats handily recaptured control of Congress, but even with the apparently unpromising slate of Republican presidential hopefuls, Democrats are going to have a very tough time taking back the White House without demonstrating their seriousness (dare I say "gravitas"?) on the war on terror. They cannot vote it out of existence.