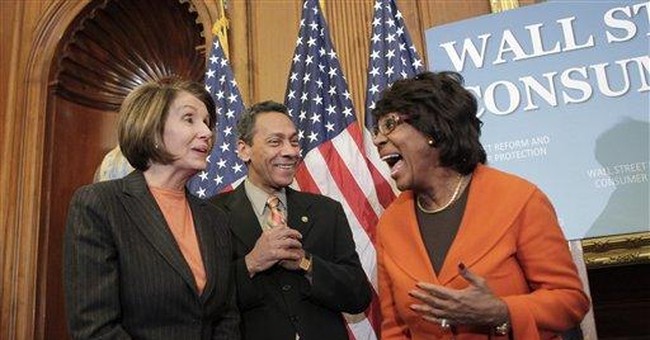 By this point, you no doubt have heard that the midterm elections will feature a jampacked roster of radical, offbeat, wacky, crazy, insane, extreme candidates.

And by "radical, offbeat, wacky, crazy, insane, extreme," I mean "not even smart enough to understand that liberal sacred cows are off-limits."

Sure, you freaks are free to chatter on your blogs or at your Klan meetings about "privatizing" Social Security or extending tax breaks for the "rich" (sorry, the super-rich) or shutting down green energy boondoggles or repealing "Obamacare," but serious people simply don't engage in extremist talk publicly unless they want to be ridiculed.

Democrats, fortunately, have a strategy in place to alert the citizenry to the ... well, let's just call it the Rand Paul Menace.

The Dems have pulled together a helpful guide called "The Republican Tea Party Contract on America," which, despite its various chilling exaggerations, is actually not an altogether awful agenda compared with the one being implemented in Washington.

If Republicans were smart -- LOL, right?! -- they would welcome a debate on radicalism and extremism. A radical, after all, is one who "departs markedly from the usual or customary." Wasn't that the promise of the Obama presidency? In that case, the past two years have been a study in economic radicalism.

First, the GOP should concede that it does have a few quirky candidates running around the country who lack the political sophistication of, say, an Alan Grayson or a Maxine Waters.

Are these Republican oddballs a bit batty? For sure. But unlike, say, the "stimulus" legislation, a plan to uncover the Hawaiian bunker with the president's Indonesian passport probably won't cost taxpayers $1 trillion and millions of jobs.

What's worse, after all, suffocating the economy or being a bit cautious?

Also, please keep this in mind: Nationalizing health care is not radical. Tripling the budget deficit in two years isn't, either.

Republicans also can -- if they stick to free market rhetoric and stay away from any insinuation of armed insurrection -- continue to be seen as the more moderate party. A recent Pew poll, for instance, indicates that 56 percent of independents view the Democratic Party as more liberal than they are, compared with 39 percent who view the Republican Party as more conservative.

A new NBC News/Wall Street Journal poll finds that a quarter of Democrats -- who, we can agree, are reliably rational people -- are only "somewhat" or "not at all" confident in Obama's economic policies. Nearly two-thirds of those polled believe the economy has yet to hit bottom. Among those cynical souls, 67 percent want a GOP-led Congress.

What do you do when your sweeping restructuring of the economy miserably fails? Easy.

1) Blame Bush. (A word of warning: At this economic trajectory, it won't be long before you get people reminiscing.)

2) Accuse your opponents of being the extremists.

Well, if the Democrats want to talk about crazy ideas, the Republicans have about two years' and a few trillion dollars' worth of them to discuss with the public.