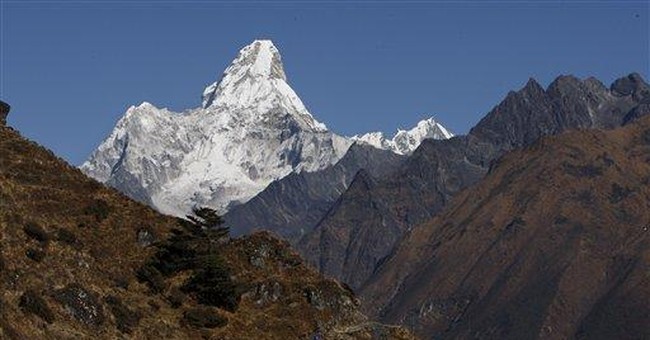 All of you deniers and flat-earthers who are exploiting the glacial temperatures and bizarre snowfall to mock global warming fears are missing the point: Weather isn't the same as climate.

Shoddy evidence, bogus fears and a lack of transparency, on the other hand, are worth talking about. Yet the lack of skepticism by those who claim a sacred deference to scientific integrity proves that flat-earthers aren't the only ones susceptible to some faith-based ideology.

Recently, Tim Wirth, who is the president of the U.N. Foundation and a former senator, said the manipulated evidence uncovered by the ClimateGate e-mail scandal was a mere "opening" to attack science that "has to be defended just like evolution has to be defended."

Get it? Those unreasonable people who deny evolution -- despite the overwhelming evidence -- are the same brand of illiterate hoi polloi who won't hand over their gas-powered lawn mowers on the word of an oracle weather model and haphazardly placed weather station.

Problems keep popping up for the true believer. Phil Jones, the former director of the Climatic Research Unit at the University of East Anglia (and the only one held responsible for ClimateGate), admits that lots of his decades' worth of data were sloppy or missing, i.e., not very scientific.

Jones, when recently asked whether the Medieval Warm Period was warmer than the current period, admitted that it had not been proved -- and the importance of this can't be stressed enough.

Is Jones just being careful now? Probably. Which is more than can be said for others.

The important Intergovernmental Panel on Climate Change claimed that Himalayan glaciers will melt by 2035. Turns out this was based on the conjecture of a single researcher. The 2007 IPCC report also warned that by 2020, global warming may reduce crop yields in Africa by 50 percent, though there was no real science to back the claim.

We all have heard the average environmentalist get a bit hysterical with tales of impending catastrophes as a way to motivate us. But these reports were edited by scientists. Can we count on them always to be honest and apolitical? The only way to know is transparency.

So let's revisit the case of Kevin Trenberth, who is head of the National Center for Atmospheric Research's Climate Analysis Section. This week on National Public Radio, he blamed the heavy snowfall, in part, on global warming, proving that even very smart experts can use weather to further the cause.

Trenberth, who has no problem taking a salary and nearly full funding from taxpayers, is not as keen on complying with Freedom of Information Act requests.

He, through NCAR lawyers -- also paid for by you (and doing a wonderful job) -- claims to be immune from such intrusions.

Then there is NASA's Goddard Institute for Space Studies. Chris Horner at the free market-advocating Competitive Enterprise Institute has been trying for years to have NASA release information about the inner workings of Goddard. As a government agency without any national security issues to worry about, it has an obligation to comply.

Shouldn't NASA want to comply? After all, the science of climate tragedy is irrefutable -- so obvious, in fact, that those who resist can be compared to Holocaust deniers.

It is true that most reasonable people concede there has been warming on the planet and that most concede they can't possibly fully understand the underlying science. I certainly can't, despite my best efforts.

The problem is that reasonable people also understand economic trade-offs. Many don't like intrusive legislation. Others can sniff out fear-mongering for what it is. Some even trust in humanity's ability to adapt to any changes in climate trends.

In the end, though, the burden of proof is on the believers. And if they're going to ask a nation -- a world -- to fundamentally alter its economy and ask citizens to alter their lifestyles, the believers' credibility and evidence had better be unassailable.