Say No to Democracy 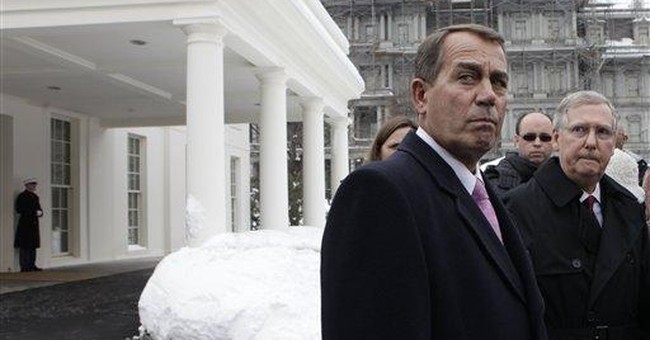 If you've been paying attention to the left-wing punditry these days, you may be under the impression that the nation's institutions are on the verge of collapse. Or that the rule of law is unraveling. Or maybe that this once-great nation is crippled and nearly beyond repair.

You know why? Because the 40 percent (or so) political minority has far too much influence in Washington. Don't you know? This minority, egged on by a howling mob of nitwits, is holding progress hostage using its revolting politics and parliamentary trickery.

It had better be quick. The populace is fickle. Jacob Weisberg of Slate believes that Americans are crybabies who don't know what's good for 'em, causing "political paralysis." Even President Barack Obama, after his agenda had come to a halt, claimed democracy is a "messy" process -- as if that were a bad thing.

Actually, "democracy" is not only messy but also immoral and unworkable. The Founding Fathers saw that coming, as well. So we don't live under a system of simple majority rule for a reason, as most readers already know.

The minority political party, luckily, has the ability to obstruct, nag and filibuster the majority's agenda. Otherwise, those in absolute power would run wild -- or, in other words, you all would be living that Super Bowl Audi commercial by now.

And if democracy is the mob -- the "worship of jackals by jackasses," as H.L. Mencken once cantankerously put it -- whom does it comprise in our scenario? Depends on how you look at it, I suppose.

Not long ago, even before the Tea Party existed, Obama whipped up crowds angry at Republicans with his rosy brand of left-wing populism. He was able to hypnotize adoring masses with his grand and nebulous promises, though he had few new ideas and little experience to back it up.

Obama's ensuing coronation -- more than 2 million people reportedly showed up for his inauguration -- must have reinforced the perception in Washington that nearly everyone was on board. And in its first year, this administration acted accordingly, attempting to transform energy and health care policy, among other things.

Turns out, if we believe polls, that Americans changed their minds quickly and in large numbers. And history shows us that generally, unhampered one-party rule doesn't work out for anyone.

Then again, today's argument that the ruling party doesn't have enough power is a reflection of a nearly spiritual belief in the wonders of government, not democracy.

Though many Democrats advocate for direct democracy -- whether it be fighting states' rights or supporting the removal of the Electoral College -- it is a curiously selective endeavor.

Take the Tea Partiers, who also have attached themselves to "democracy" rhetoric. What, one wonders, will Democrats have to say about the filibuster when Sarah Palin is jamming through her first-year agenda as president?

We must be more judicious. We must have more debate before moving forward. The Founding Fathers never envisioned radical policy being jammed through by the majority. Oh, my God, it's actually happening.

Those who contend that the ruling party isn't instilled with enough control are worried about politics, not process. And actually, regardless of which ephemeral majority happens to win the day, we should be looking for more checks on power, not less.