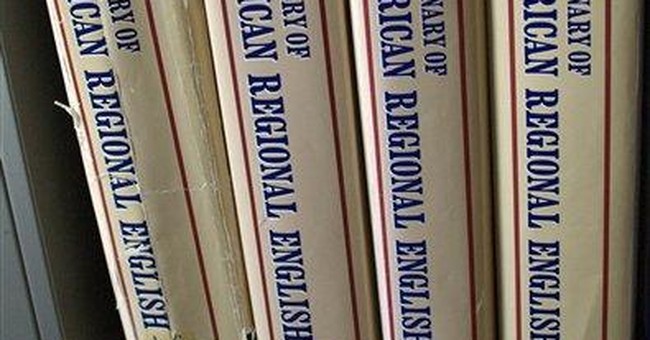 Like other books Americans have a duty to own -- the Bible and "Atlas Shrugged," for instance -- the dictionary does not require an absurd marketing ploy to sell itself.

Yet every year, a barrage of cockamamie "word lists" are unveiled by publishers seeking to bring attention to the evolving English language.

In the end, these lists establish two facts: 1) We are unable to invent any new words of value. 2) If you put a list together, a columnist probably will write about it.

One needn't be William Safire, though, to be unsettled that the word "philanderer" is a major mystery to so many people. According to a new list by Merriam-Webster, "philanderer" (a national pastime, meaning to be sexually unfaithful to one's wife) was one of the most searched words of the past year because of the crush of politicians and celebrities busy hiking the Appalachian Trail.

The word receiving the highest intensity of searches over the shortest period of time was "admonish" (to express warning or disapproval). It was triggered by a crude outburst of a congressman from South Carolina and the subsequent moralistic "admonishment" of him by Congress.

As if we needed any more words to forget, every year the New Oxford American Dictionary injects them into the lexicon.

The 2009 Word of the Year, announced this week, is "unfriend." Unfriend is a verb meaning to remove a virtual acquaintance from your social networking site's pretend "friends" list. It would appear in a sentence like so: "Oh, yeah, now I remember why I didn't keep in touch with those bozos from high school. I'm not sure how they found me, but I must remember to unfriend them."

According to Christine Lindberg, senior lexicographer of Oxford's United States dictionary program, "unfriend" is an inspired choice because of its "currency and potential longevity." Considering the previous champions have included words I needed to look up, such as "hypermiling" (driving using techniques that are environmentally friendly) and "locavore" (eating food produced with 16th-century methods in an effort to be environmentally friendly) -- I sense a theme -- this is wishful thinking.

Another new word of equivalent non-value is "freemium." It refers to a business model that offers free services in an attempt to lure paying consumers -- or what we in the newspaper business refer to as "bleeding dry."

Others fresh words no respectable citizen would dare use are "funemployed" (taking advantage of unemployment to pursue fun) and the novelty word "deleb" (because "dead celebrity" just has too many syllables to deal with).

There is, admittedly, one trend that could prove to be a bright spot. The newly minted "teabagger" gives us hope that crude sexual terms will be applied regularly to politics, where they can do the most good.

Yet like a writer on deadline straining to find fodder for a column, most of these words are too contrived and trendy to be especially helpful. What are we really saying?

For that, thankfully, The Global Language Monitor has come up with a list. It utilizes a mathematical formula to track the frequency of words and phrases in print and electronic media. It found the most used terms were "global warming," "9/11," "bailout," "ground zero," "derivative," "surge," "tsunami" and others like them.

Those words are downers, but the English language deserves better than "sexting," "intexticated" and "hashtag." At least, I hope so.