The Return of One-Party Rule 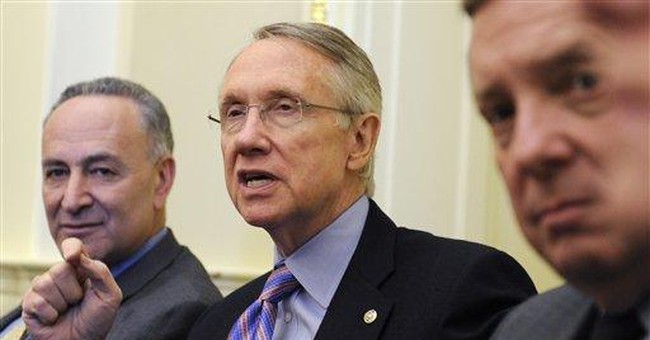 Imagine that. The most expensive social experiment in American history -- one that will cost taxpayers more than both the Iraq and Afghanistan wars combined -- was allotted less then a single day of debate in Congress.

How many speed-reading whiz kid representatives do you think slogged past their own pork to read the entire 647, or so, pages of the "stimulus" menu?

This week, more than 200 notable economists -- including three Nobel laureates -- signed an open letter in The New York Times challenging Barack Obama's false suggestion that all economists agree a bailout is needed. It was entitled "With all due respect Mr. President, that is not true."

So though Nobel laureates can't reach anything resembling a consensus, your former community-organizing/car-dealing/ambulance-chasing congressman has the intellectual capacity to digest a $900 billion piece of legislation in mere days. Amazing.

Obama, despite his promise to employ a new kind of politics and thoughtful deliberation, already has unsheathed the panic-mongering to get things moving. We must react swiftly, the president warns, for "all those who live in fear that their job will be next on the cutting blocks." Or in other words, we have nothing to fear other than fear itself.

Yes, $400 million for STD prevention will save your job. A $34 million remodeling of the Department of Commerce, $150 million for honeybee insurance, and the hundreds of billions in new government growth, you are led to believe, will create economic growth faster than a similar-sized business or payroll tax cut.

When Obama, who also promised to transcend partisanship, can't find a single House Republican to vote for his bill (surreal as it was to watch the opposition finally locate its spine), maybe it's time for a GOP furlough. After all, you found your principles six years too late. You are now a member of a governing body that can't even be bothered to debate a massive piece of trans-generational legislation.

In truth, this rush to war is all about the fickle nature of the voter. According to a new Rasmussen poll, 42 percent of the nation's likely voters support the president's plan, while 39 oppose it and 19 are undecided. The public's support for the plan is down 3 points in a week -- and this, without even having any time to chew on the specifics. Obviously, there is no time to waste.

George W. Bush engaged in the similar scare game when pushing through his $700 billion Troubled Asset Relief Program. But whereas Bush looked like a third-grader asking mom for an advance on his allowance, Obama has awe-inspiring confidence to pretend he actually can fix a recession.

Worse, it's back to one-party rule. One set of ideas. No real deliberation. No real compromise.

Obama, of course, has a powerful enough mandate to ram through any legislation he desires. And he's even polite enough to pretend to care about Republicans' concerns. They even may continue to be invited to the White House cocktail parties. But Obama would do Republicans a huge favor by explaining that "bipartisanship" and "unity" now mean voting with the new far-left majority.

Because really, for the next two years, at the very least, all debate is over.