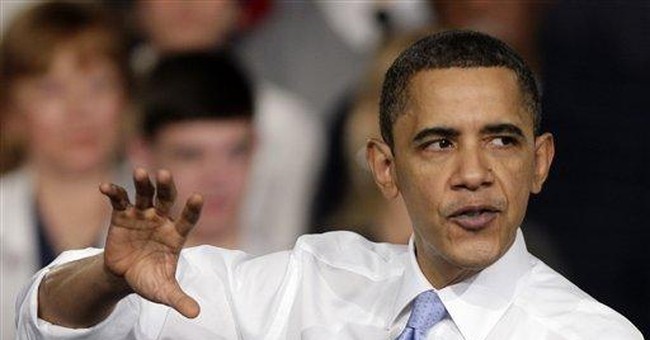 Credit where credit is due: the latest White House argument for health reform is compelling. The administration has figured out how to sell a massive expansion of government as “fiscally conservative.” On Thursday, the CBO released estimates for the President’s bill, projecting an overall cost savings. The White House now trumpets that the health-reform bill will lead to the biggest legislated reduction of the deficit since the first term of the Clinton Presidency.

“You have to spend money to save money” is a popular expression. No doubt, that’s what the White House is hoping Americans will think when they read the numbers. Throughout this process, the CBO has projected savings: Earlier this month, for example, the CBO revised its estimate of the 2009 Senate health reform bill, projecting $118 billion in estimated savings over the next ten years (a reduction from the previous estimate of $130 billion). Thursday’s estimate – $138 billion – suggests slightly more deficit reduction.

That means that to “save” a dollar in Washington, you have to spend seven dollars to get it. The White House allies are enthusiastic. “That’s a pretty good deal,” Ezra Klein wrote in his Washington Post blog. Paul Krugman agrees, describing it in his New York Times blog as a “bargain.”

The refrain that this is a “deal” or a “bargain” strikes at the core of what ObamaCare really is. Because, of course, there’s no deal and no bargain. ObamaCare’s spending shifts the poorest patients from expensive emergency-room care into a proper regiment of checkups and preventative health – which may produce savings per treatment, even if it costs taxpayers more in the long term. But beyond that, little about ObamaCare’s spending has anything to do with saving.

If deficit reduction was really the goal of health reform, the President could simply table a bill with all of his proposed taxes and Medicare cuts. Implement those measures, and you could cut trillions of dollars from the deficit over the same ten years, instead of mere billions.

If President Obama truly believes new insurance regulations and state-based health exchanges will curb health inflation and make insurance fairer for all, he could enact those ideas at little cost to taxpayers, and sleep better knowing he’d helped Americans in the private insurance market.

In other words, much of ObamaCare could happen without spending a dime.

Of course, that’s not what’s happening, because the real goal of the exercise is hiding in plain sight. The real goal is to sugarcoat a massive expansion in government entitlements at the precise moment the U.S. is least equipped to pay for them. ObamaCare adds a projected 16 million people to Medicaid and CHIP entitlement rolls – projected to cost $434 billion, or almost half the price of the plan. $466 billion of the rest subsidizes lower income families to help them buy private insurance – with no guarantee that health inflation won’t outpace those subsidies a few years later. (The remainder - $40 billion - is pocket change by the standards of Obama era Washington.)

This explains why Democrats think the proposed legislation is a good bargain. The bargain isn’t that health reform spending buys deficit reduction. The bargain is that Democrats are buying government-run, Canadian-style health insurance for a growing number of Americans just as they’d always hoped to – and all it’s going to take to pretend it’s fiscally responsible is an extra dollar of additional new taxes and savings for every seven in spending.

Instead of “Medicare for all,” they’ve concocted “Medicaid for more.” And trading the promise of a tiny stab at the deficit, eventually, is a cheap concession to get it, especially since there’s little anyone can do if those savings haven’t appeared in ten years’ time. For taxpayers, it could prove to be the most expensive “fiscally conservative” legislation in history.