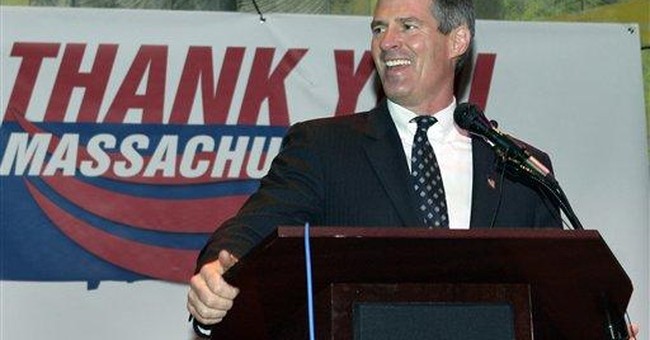 After Massachusetts decidedly elected Scott Brown, there is a temptation for Republicans to hear the message they want to hear, rather than the message that Bay State voters actually sent. With the confetti having just been swept clean from Brown's victory rally, some - conservatives and Republicans - seem too eager to claim that that election was a repudiation of all the President's ideas. And while this view is held by a minority, this much is clear: entering the 2010 Congressional elections, the GOP may be tempted to simply run in opposition to health reform.

But if Republicans really are positioning themselves to remain the party of no, it's a serious mistake. Let's be clear: health reform is not a manufactured issue, cooked up in hyper-partisan White House by an overly ambitious chief of staff. To state the obvious list of woes: cost continues to spiral up; too many are without insurance; quality is uneven.

And Massachusetts voters elected Brown precisely because he was articulate about the kind of health reform voters wanted. Unlike President Obama, he proved he understood middle-class anger about rising health-insurance premiums, and he took targeted action to fight it.

Brown made his commitment clear in late December when he introduced legislation in the Massachusetts State Senate. Tellingly, his bill was titled “An Act Reducing the Cost of Health Insurance.” The bill is two pages long (including the cover), compared to the Senate ObamaCare's 2,074 pages.

Brown's bill isn't historic, or dramatic or revolutionary. But nobody could argue it wouldn't reduce the price of insurance. Brown targeted regulations, specifically those that require health insurance policies to cover specific services.

These regulations - known as insurance mandates - force patients to pay for Cadillac coverage they don't need. If Boston required that all cars sold in the Commonwealth must have air conditioning and sunroofs, cars would become more expensive; if Boston requires that many health services be covered, it pushes up the price of even basic coverage. Implementing Brown's legislation would cost taxpayers almost nothing, since it assigned an existing bureaucracy the power to roll back costly insurance regulations.

State regulations add billions to the price of insurance across America. And Massachusetts has many, many regulations: requiring in vitro fertilization, participation in clinical trials, substance abuse rehabilitation and (depending who's counting) between 33 and 49 other services. It's one reason that health insurance premiums in Massachusetts are nearly 50% higher than the national average.

Brown's legislation is bold, but it's also controversial. His opponent gave speeches and ran ads claiming that Brown was taking the side of insurance companies. Voters didn't take the bait, and Brown's support rose afterwards. Since his election, he's maintained that pragmatic attitude, insisting that he's open to discussions with Democrats on any issue where they can find common ground. And there is common ground on health reform, particularly since we can all agree that there are problems with the lack of transparency, consistency and real competition in the private health market.

In 2008, Massachusetts voters gave President Obama a strong mandate for positive bipartisan change in Washington - and he wasted it, choosing to support a reform plan that became more complex, more cynical and more Washington for each and every day it was in the hands of Congress.

Last Wednesday night he seemed to shift course, offering Republicans a chance to bring him their ideas on health care. Whether Obama is being cynical or serious, Massachusetts voters have given Scott Brown and his Republican colleagues a mid-term chance to retool the health care debate, rather than gloat over the president's mistakes.

Brown was elected in part because he proved he was willing to back his criticism of the President's plan with a constructive alternative. The president's gesture is an opportunity for Republicans to table - and get credit for - modest, affordable, pro-market reforms, even if it means sharing a little credit with moderate Democrats to get a bill through.

Here's a nice way to start - extend Brown's proposal to the national level. The mandate madness problem, after all, could easily be cured. Republicans should push to create a true, national market for health insurance, open to every citizen, not unlike members of Congress enjoy, rich in benefits but light in regulations. This idea could be combined with others meant to better the health-care system: protect consumers with simple rules to prevent unfair insurance cancellations and improve portability; help those who need help, like the millions of Americans with pre-existing conditions; and create and protect market incentives for wellness.

If Republicans seize this opportunity, the country will win too, since Massachusetts isn't the only state in the union where voters are alarmed at the rising cost of health care. So goes Brown, so goes America.