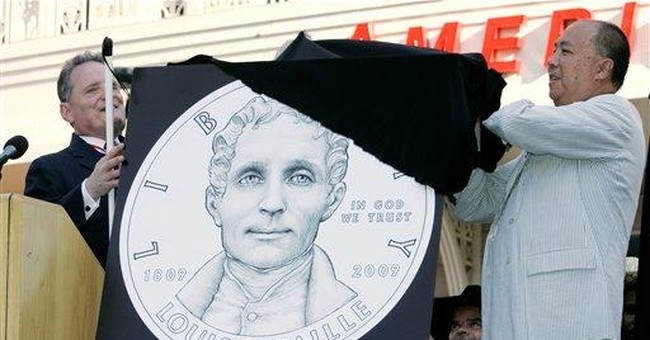 If you've ever considered buying silver, I recommend you do it soon.

I just urged my readers to buy the metal with a unique U.S government-backed vehicle the average investor has never considered. More on this later. First, I want to tell you why I believe it's a great idea to buy silver right now...

Man has used silver as money for thousands of years. It's easily divisible. It's easy to carry around. It has intrinsic value in jewelry and industrial applications. Heck, the British "pound" gets its name from the weight of silver used for trade in the early ninth century (a so-called troy pound). Silver as money is even mentioned in the Bible (it's how Judas was paid off for turning in Jesus).

However, in the early 20th century, governments around the globe abandoned silver as money. They decided it was easier to expand a nation's credit with fiat paper money than to mine more silver. Over time, governments sold off their silver stockpiles to industry and investors.

At first, much of this silver was used up in industrial manufacturing and processes like photography. That silver is gone forever. Then, starting around 1997, silver quietly started flowing into private hands. Individual folks concerned with wars, investment bubbles, and mismanaged economies were buying it up. They turned to silver as a safe form of savings that can't be debased by a gang of spend-happy politicians.

Buying silver back then was a smart move. The metal is up 150 percent over the last 12 years... while stocks and real estate have struggled to do anything... while paper currencies have depreciated in value.

More people are catching onto this move. Have a look at the chart below. It shows how silver keeps moving into private hands:

Now here's another one. It shows the sales volume of the U.S. Mint's popular Silver Eagle coins. Note the huge volume spike on the right-hand side:

As you can see, there's a modern-day "silver rush" happening right now.

Many people in the advisory business would take this opportunity to tell you silver is going to soar in the next few months... Inflation is set to destroy the value of the U.S. dollar. Place your bets on gold and silver.

I'm not going to do that. I don't think inflation will be a problem for years. There's simply too much excess debt, unused industrial capacity and bloated asset prices that need to be worked through before inflation becomes a problem.

What I can tell you is something much more important: Governments around the world are behaving absolutely stupidly right now. Our vice president recently said with a straight face that the government has to spend more money in order to save the nation from bankruptcy. That's crazy... but it passes for conventional wisdom these days. In my 30 years of investing, I've never seen so many risks in the financial system. That kind of "patriarchal thinking" is producing those risks.

That's why it's a good idea to keep a portion of your assets in "chaos hedges" like gold and silver. Think of it as insurance against calamity.

I can't recommend owning silver as a bet on inflation, because the facts don't support it. But I do recommend owning it as a safe store of wealth. And as I've just showed you, many people are catching onto this line of thinking. Buy your silver before this new interest becomes front-page headlines.

Here's to our health, wealth, and a great retirement,