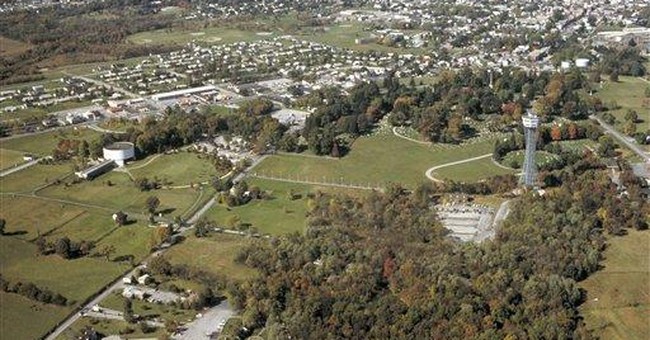 George Bush is now the last remaining hurdle to the establishment of de facto federal zoning along a 175-mile corridor running from Gettysburg, Pennsylvania to Charlottesville, Virginia. It’s one of the largest federal land grabs in history.

On April 29, the U.S. House of Representatives passed a massive, pork-laden bill that included a provision creating the Journey Through Hallowed Ground (JTHG) National Heritage Area. Debate was limited to just 40 minutes.

Environmentalists and preservationists love heritage areas, because they can be used to curtail development.

Local elitists like them because they can help keep people they consider to be undesirable out of their communities. Minorities are harmed disproportionately when land-use restrictions cause home prices to soar. (It is perhaps no coincidence that lily-white Waterford, Virginia was at the epicenter of the effort to create the JTHG Heritage Area. Waterford has a rich black history -- and history is apparently where the village would like to keep it.)

Politically well-connected developers like heritage areas because they can be used to establish near monopolies on real estate development opportunities. As the Heritage Foundation’s Ron Utt discovered, that’s precisely what the JTHG Heritage Area would do.

And federal bureaucrats love heritage areas because they allow them to get around little inconveniences to their central planning -- inconveniences such as local elected officials.

But it is unlikely that support for the land grab was as great as the tally might suggest, as it was buried in an omnibus bill of over 60 other proposals -- some enjoying wide support.

As Rep. Rob Bishop (R-UT) noted during the limited debate, “Many of the sections of this bill are unable to stand on their own and have subsequently been bundled into a $300 million brew to avoid individual scrutiny… this omnibus was created with enough prizes that inevitably the bad will be overlooked and everything, the good, the bad and the ugly, will be able to cross the finish line.”

Approval of the JTHG Heritage Area is a case study in what is wrong with American politics.

The JTHG Heritage Area wasn’t approved by Congress due to overwhelming public demand for it. Borrowing from the Beatles, perhaps it got by with a little help from Wolf’s friends -- a lot of Ben Franklins, Alexander Hamiltons, Abe Lincolns and George Washingtons.

You see, Congressman Wolf slipped a $1 million dollar earmark in the 2005 federal transportation bill -- buried among 6,372 other earmarks -- for the Journey Through Hallowed Ground Foundation. This is the very group that has led the lobbying effort for Wolf’s bill. More unusual still is that at the time of the earmark, the foundation had yet to even be incorporated and was operating out of the personal post office box of its executive director, Cate Magennis Wyatt.

It appears as though Congressman Wolf used taxpayer money to fund the lobbying campaign for his own bill.

Not only that, but Pongrace apparently was authorized to speak for Congressman Wolf in meetings about the Journey Through Hallowed Ground Heritage Area.

It turns out that Pongrace serves on the board of the Journey Through Hallowed Ground foundation -- the group receiving Wolf’s earmark largesse -- and Pongrace’s wife has served the group as vice president.

Apparently, the concept of a conflict of interest is lost on the mega law firm of Akin Gump.

Interestingly, at the very time Frank Wolf was collaborating with Akin Gump on his bill, he criticized the firm for working for the Chinese government in its bid to acquire Unocal.

Wolf wrote to Akin Gump, “I question the appropriateness of an American firm… being on the payroll of the Chinese government… I immediately thought, ‘Is there no bright line to separate who lobbyists in Washington will and will not represent?’”

Is there no bright line, indeed.