Standing up for victory 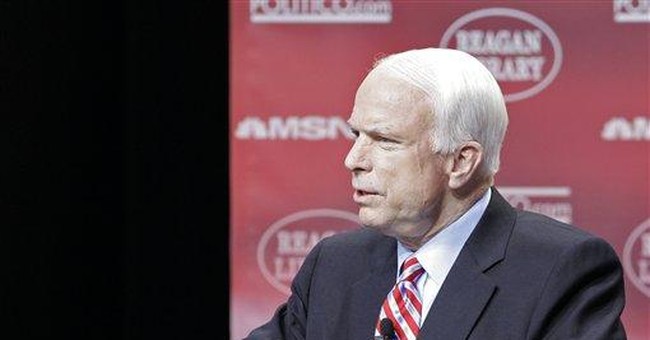 It was easily 130 degrees at 11:00 a.m. and both the American and the Iraqi soldiers were hot and tired from the hard training. An Iraqi soldier kept falling behind during the training, so finally his Iraqi squad leader pulled him over to me and started explaining in Arabic that he was in pain from an injury and asked that he sit out during a portion of the training.

Suspiciously, I asked him to show me this injury. As he pulled up his pant leg a fresh bullet hole appeared – he had been shot on his way to work by a gang of insurgents. The young Iraqi was afraid if he missed training he would be kicked out of the unit.

At that moment, I thought to myself, how many Americans would be willing to look him in the eye and tell him that America should withdraw because his people don’t have the courage and commitment to rebuild their country?

I have witnessed firsthand the mistakes made on the ground in Iraq. From April 2004 to March 2005 I lived and worked with an 800 soldier Iraqi combat unit north of Baghdad. When I arrived, there was very little equipment, no vehicles, and the AK-47 ammunition was corroded and unusable. Perhaps most importantly, over a quarter of the unit was missing along with their weapons. However the joint American and Iraqi Task Force successfully changed the landscape.

We secured better ammunition and weapons, created facilities that were usable for training and living, and acquired vehicles. None of this would have been possible without American soldiers on the ground. Mentoring the Iraqis in the workings of a modern army, while challenging, was critical to the foundation of a democratic Iraq.

There is a misconception that creating the Iraqi security forces should be entirely self sustainable. It is an unrealistic view, in the near term. It takes time. By my estimation, it takes, at a minimum, the better part of a year to create a battalion.

Language and culture barriers, insufficient numbers of trainers, sub-standard or non-existent equipment, and perhaps most importantly the ongoing daily violence all added time to the process. It was very frustrating.

Change was needed, and the surge of additional troops seems like a vital step in the right direction.

John McCain is the only presidential candidate who was calling for more troops in Iraq and a change in strategy when it should have been implemented years ago. To turnaround the worsening security situation, and succeed in Iraq, we needed more forces.

We have a very long way to go, but the first stage of the surge has resulted in decreased violence in Baghdad and progress in political reconciliation. It is a small but welcomed sign of hope for Americans that believe in winning.

General Petraeus’ plan of moving soldiers off the bases and into the population, living and working closely with their Iraqi counterparts will certainly help the security situation as well.

And most importantly, it will forge an even more effective mentoring relationship between American and Iraqi forces.

Abandoning the Iraqis will result in chaos, genocide, and leave al Qaeda and other terrorist organizations a safe haven from which to regroup and launch future operations in the region and beyond. I know this because I’ve seen it with my own eyes.

There is a good option for an American victory – surge the troops, let General Petraus do his job, and support leaders like Senator McCain who to continue to do the right thing.

With today’s partisan political grandstanding, John McCain has shown tremendous courage and resolve in continuing to stand up for victory in Iraq. He has been on the front lines in advocating for a more comprehensive strategy for a long time, and it is encouraging to see him choose policy over poll numbers.

John McCain has said that he would rather “lose a campaign than lose a war” and I believe Americans would rather elect victory than ensure surrender.