Family Budget Advice from Obama? Don't You Dare Gamble with His Money 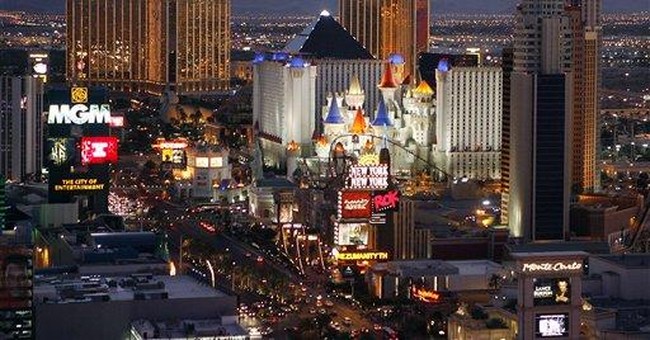 In all of this, I was, as President Obama put it, blowing my money. Emphasis on the word: my. My money. I earned it. And I can do with it as I please. As a matter of fact, my wife and I are defying the President and going on vacation to Las Vegas soon, where we will blow more of our money. And, what if we blow our kids’ college money too? No problem – the president has promised free college for all.

In lecturing us about blowing our money, The Great Ozbama displays breathtaking gall. Given that he is blowing trillions of our money, not his, and burying us in debt as no president in history, silence on the subject would seem more reasonable.

To be nit-picky about it, since he is citing trips to Vegas as particularly objectionable, I hold in my casino chip-calloused fingers a list procured from CanadaFreePress.com of Mrs. Obama’s staff and their salaries. She reportedly has a staff of 22 assistants. Yes, I said twenty-two. (Previous First Ladies’ dedicated staffs were in the single digits). Michelle’s little army includes a Chief of Staff costing $172,000 a year; a Deputy Chief of Staff at $90,000; a Director of Policy and Projects at $140,000; a Director of Communications at $102,000; a Deputy Director of Scheduling at $62,000; two Social Secretaries – mysteriously, one at $65,000, one at $64,000; an Associate Director of Correspondence at $45,000, an Assistant to the Social Secretary at $36,000, and more, in total consuming $6.3-million annually thus $25-million during her 4-year term. Not to mention a make-up artist and hair stylist.

I have one assistant. Answer my own correspondence. Keep my own calendar. When I produced television infomercials, quite a few actresses, including Florence Henderson (Mom, from the Brady Bunch) eschewed make-up artists and put on their own faces. Heck, the company I’m associated with, that takes care of 25,000 members and 300,000 customers, publishes 5 newsletters, hosts two major international conferences a year, and has a burdened and busy CEO whose schedule must be managed, and its own First Lady (his wife), operates everything with only thirty employees.

Mr. President, sir, if you are going to lecture me about blowing my money in Vegas or turning down my thermostat or inflating my tires, do you think you could reign in your wife’s blowing of my money just a teeny bit? Surely she does not need twenty-two people to support her First Lady duties, unless she’s up to something more that we, the taxpayers (and thus, your bosses), haven’t been told of? I realize you’re not resting until America’s jobs crisis is solved, but I doubt the wisdom of solving it by having everybody working for Michelle. Those are temporary jobs.

If you refuse to maintain a humble if not humiliated silence on the subject of blowing money, you might suggest people avoid blowing theirs traveling to Hawaii. A sun lamp and inflatable kiddie pool from Wal-Mart should do most folks nicely. Or not traveling to Washington D.C., a tourist trap with grossly over-priced souvenirs second only to Disney World, which you could also suggest families avoid blowing their money at. Or not traveling to Chicago, where they might eat big, over-priced steaks, which require too hefty a carbon footprint to produce. I’m sure that Nevada’s endangered Harry Reid greatly would appreciate you picking a different target. So would all those service workers you claim to be allied with, whose jobs depend entirely on people blowing their money in Vegas.

Or just shutting up. Geez, you couldn’t even let us watch the Super Bowl without your yapping. Is one day too much to ask?

And why, may I ask, are you urging us all not to blow our money, anyway? I’ll bet you think of our money as your money, to spend as you see fit, stock your slush fund with, influence elections with, gamble with – doubling down on failed schemes to spend America to fiscal health? You sound like the son urging his parents not to buy themselves a motor-home, because it would cut into his inheritance. Not that you mind blowing our grandkids’ money. You must think of that as yours too.

From a gambler’s perspective, I have bad news. You went all in and bet your presidency on successfully shoving socialism down our throats, and you have sevened out.