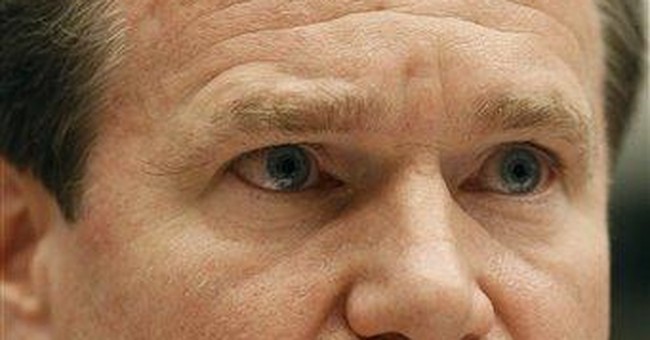 Here’s a new-favorite New Yorker cartoon: guy in shirt and tie at his desk, on the phone, with the caption: “I would have gotten that report to you sooner but I wasn’t held enough as a child.” A football player who dropped the pass that would have won the game actually said, “The field was muddy, it was raining, and the ball was slippery.” News flash: same conditions existed for the guys who caught balls.

America has gone from the land of personal responsibility to the land of pathetic excuse-making, from top down, bottom up; and worse, to accepting of excuses – and the entire thing should be a cause for visceral disgust. The ‘culture of excuse acceptability’ has led us to this point, and if we don’t reverse it, it will doom us.

Examples are everywhere: A whole clown car full of government incompetents damn near got 200+ people blown out of the sky on Christmas Day and not one has stepped up to say, “I screwed up, and I resign – and I’m giving back my pay for the past year as I go out the door, my head hung in shame.” The watchdogs that for years let Madoff go on defrauding people of millions all have. Why haven’t they all been fired? Or had the honor to throw themselves on their swords?

And when will something – anything – be Obama’s responsibility? (An Associated Press report in the Sunday newspapers says that the Democrats’ mid-term 2010 strategy will be to blame Bush. Maybe by the end of Obama’s third term, he’ll take ownership of something.)

The media goes along with all this rather cheerfully. I believe I’ve caught talking-heads on every network pondering the Christmas terrorist’s motivations. He comes from an affluent family, he has a good education; why, oh why, would he hate us so? What have we done to him? Well, perhaps he just wasn’t held enough as a child.

How ‘bout all those folks who bought homes they couldn’t possibly afford by taking out mortgages without bothering to read or make sure they understood the documents? Well, that’s the bankers’ fault, of course. And the obese waddling about? Fast food industry devils. People who knew the industry in which they were employed was shrinking and inevitably dying, and who had years to prepare themselves financially, educationally and professionally to adapt are just the victims of evil out-sourcers. I cringe even when my local TV news describes somebody assaulted at 3:00 A.M. in a dark public park known as a drug dealing mart, across the street from a night-club famous for after-hours violence, as a “victim.” Seems to me he was more of a “volunteer.” And we all might be better served by identifying him as such.

We desperately need more honest public discussion. Calling acts of terrorism and war against America, intended to mass-murder us “man-caused disasters” is embarrassing. Arguing over the merits of extending government run health care to illegal immigrants is insane; what part of the word “illegal” is incomprehensible or ambiguous? Extending some version of “the Twinkie defense” for every imaginable act of irresponsibility is not helping us at all. Somali pirates aren’t at fault; they’re poor, and deserve our compassionate understanding. At what point do we raise the matter of personal responsibility?

A report in my Sunday paper, The Cleveland Plain Dealer, says 1 in 8 Americans receive food stamps – 1 in 8. Liberals would say it is shameful for America, the richest nation on earth to permit 1 of every 8 of its citizens to live in such poor conditions. We need to say it is shameful for many of these food stamp recipients to be in such a situation and to continue relying on hand-outs. We need to ask them what they are doing to remedy their situation, to improve their circumstances.

I am not insensitive to those in temporary trouble; when I was young, my parents were on food stamps for about two months. I know trouble can arrive uninvited. But I also know that, among these 1 in 8, are huge numbers of long-term losers not exerting the slightest effort to fix their problems and get off the dole. And we have methodically removed the shame and stigma, even the inconvenience of getting the hand-out; it is electronically deposited to food-stamp cards on the 1st of each month – a time that Wal-Mart reports a sales surge. There’s no shame in being broke. There is shame in staying broke, in this, the richest-in-opportunity nation on earth.

So far it looks like the new decade, even more than the last, will be one of tolerating, sanctioning, accepting – even celebrating – entitlement, victimhood, and abdication of personal responsibility. It’s an unsustainable philosophy for the nation. If it is accepted as norm, financial and moral bankruptcy will inevitably follow. If we are rich in excuses, we’ll be rich in nothing else.